“Today, we talk a lot about terrorism, but we rarely talk about state terrorism.” – Bianca Jagger

[ Note: The SAA struggles logistically with too many key tasks that need to be done right away. The perimeter around the Deir Ezzor airport must be widened enough to prevent its coming under ISIS shelling and rocket fire, before it can be used as an advanced base that might even include being able to rearm and refuel Russian combat helicopters, so they can fly more sorties in fast moving battle.

The Syrian Army also needs to get across the Euphrates river so the Kurds and Americans cannot pick off Syria’s richest oil field to hold hostage during the political talks, or forever. Losing that badly needed source of rebuilding wealth would be a bittersweet blow to its taking Deir Ezzor.

I was caught flatfooted with Damascus seeming to not have the available troops to do the military multi-tasking necessary. With all the successful deconfliction arrangements in place, brilliant work by all those involved, I had assumed that the troops tied down in those conflicts would form the reserve needed provide the manpower needed to retake Deir Ezzor.

It appears that either that manpower is still caught up in static security work; or that, especially in the Damascus area, Assad is hesitant to move too many troops out of the area, with an unhappy Israel looking for any opportunity to spoil the Syrian victory. This manpower shortage shows in the dragging out of the ISIS Hama pocket, which we are told was due to many of the SAA deployed forces being sent to Deir Ezzor.

We did not know for sure if the Kurdish SDF forces, long struggling with the Raqqa battle, had the reserves to make a big move into western Deir Ezzor. But they quickly pushed down to the northern edge of the city in just two days, and twisted the knife by showing their female fighters, laughing and giggling as pretend soldiers who pushed ISIS out.

More likely, ISIS had already pulled back, and the Kurdish advance south was unopposed until it reached the Deir Ezzor industrial center northwest of the city. The Kurdish SDF is already south of the Syrian Arab Army, where it has a narrow river crossing position in territory gained today on the west side.

The street fighting required to clear the city can certainly drag out, so if the SAA wanted to cross the river to the south, it would have strong ISIS forces on both flanks, which is not an ideal river operation. We know ISIS has been heavily bombed, which makes its staying power in putting up a fight to the last man in Deir Ezzor hard to predict.

ISIS leadership could order a pull-back. But doing that exposes its convoys to being destroyed from the air, which has happened a number of times already. ISIS command might decide that it would be better to have them fight and die in Deir Ezzor than be blown to bits on the road south to Al-Mayadan. ISIS is fighting a delaying action in the Hama pocket, tying those SAA forces down so they cannot be used as reinforcements at this critical time in Deir Ezzor.

We are expecting a deconfliction agreement in Idlib to come out of the Astana meeting later in the week, which would be good news. But with Iraq now having to consider a potential military conflict over the Kurdish referendum in central Iraq, whatever plans it had to close the Al-Bakumal back door on the border so an ISIS fleeing from Syria could not pour over the Iraqi border, might be canceled. Despite all the major progress, this Syrian war, and the one in Iraq, are not over by any means… JD ] 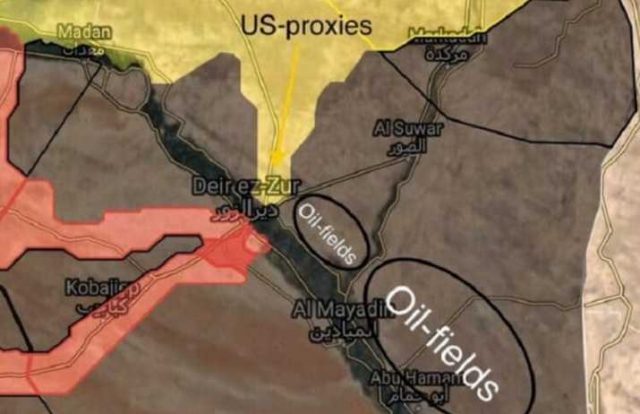 The Syrian Arab Army (SAA) advance on Deir Ezzor will go down as a modern example of a combined operations success against ISIS, the best armed and trained proxy terrorist force that we have seen yet.

It has put up a tough fight against both Russian and Syrian airpower when it had none itself, other than the occasional favor supplied by the US coalition to bomb SAA forces by mistake, and then supplying the magical helicopters to extract its proxy terror commanders.

All the modern combat tools were needed to keep Syrian casualties as low as possible to maintain morale, which has been critical to sustaining this six plus years long war. Signals intelligence has played a key role in not only identifying commander centers, but also when they would have the most high value targets in them to take out.

When the big push to break the ISIS siege line came, we saw the Russian submarines used to fire Kaliber missiles for the initial overnight strikes where dawn revealed the attacked ISIS positions as abandoned but equipment abandoned. Daylight found that planes and helicopters were brought in to strike all ISIS defensive points prior to their being stormed.

Both surrounded Syrian Army pockets have been relieved, and the Palmyra road fully secured to maintain the supplies needed to feed the hungry hostage population of Deir Ezzor and continue the offensive so that ISIS has no time to regroup.

The SAA strategy appears to be an encirclement one, so that fewer ISIS fighters can retreat to new defensive positions. We have reports of ISIS pulling back, retreating down the Euphrates, where we still do not know if the Iraqis will have the back door closed at Al-Bakumal.

We also have photographs of pontoon bridging at the front for an anticipated Euphrates river crossing with two possible goals – to get into the rear of ISIS on the East side of Deir-Ezzor, and to block the American-backed Kurds from grabbing the rich oil fields on that side. That woule be a stab in the Syria’s back if the Kurds have that intention, and something that could bring the SAA and SDF into conflict.

If the US were to provide the Kurdish SDF forces air support in such a conflict, what would the Russians then do to support the SAA? Conflict with the US has been carefully avoided up until this point, but one big mistake could send the air balance of power spiraling out of control to spoil the Syrian victory.

The Western and Gulf States attempt to Balkanize Syria has boomeranged on them, as a new, stronger Syria has emerged from the ashes, including a military with a huge amount of combined-operation combat experience.

The morale of the Syrian military is now sky high with the recent string of victories it has won over ISIS, while doing what any soldier’s dream would be – ridding one’s country from a foreign invader, which in this case should be called “invaders”.

I was able to meet the Speaker of the Syrian Parliament, Jihad Lahan, as part of the ten-person US monitoring group for the June 4th, 2014 elections. He told us at that time that Syria was holding jihadi prisoners from over 65 countries.

All of us were shocked, as we instantly realized that a World War being fought against Syria. We could not see then that Iran’s and Russia’s assistance would turn what appeared to be a hopeless struggle completely around.

The real anti-terrorism coalition, Syria, Hezbollah, Iran and Russia, has been forged in fire and brimstone, and is now the template for others to follow if set upon by state-sponsored terrorist proxies.

First, you need an army structure that will resist the foreign offers to overthrow your own government in a coup and have secure positions in the new puppet government as the reward. You need allies to support you, not just verbally but with bayonets and bullets, and the proper anatomy to stand up to the major world power.

Such friends do not grow on trees, and neither do their motives have to be completely altruistic. Putin quite frankly borrowed an old American PR phrase from WWI, “Better to fight them over there”.  The last figure I saw, the Russian command had killed 6000 jihadis from the former Soviet Union States that would not be returning to form new terror cadres in their home countries.

You also need modern weapons and all the technology both for offense and defense. A retired American general advising the insurgents was pulled out of Syria a few years ago by a SEAL team because the Syrians had picked up Intel in a captured convoy regarding who and where he was.

The SEALs extracted him before the Syrian commando team preparing to capture him could act. Veterans Today got this information via parties who knew we would publish it, and we did.

So the Syrian victory is not solely theirs, as we all should benefit from the hard lessons they have learned and paid for dearly in blood and treasure. And one of those lessons is to not let the state-sponsors of the terror campaign against Syria get away unpunished, or they will just move their terror game to a new location.

What do I mean by that? How about REPARATIONS? At the last press conference at the 2014 Syrian elections, I presented some statistics that no one ever had before. I decided to extrapolate the Syrian casualties onto the US population, as that number, a huge one, would register on American brains more.

The 400,000 number of Syrian dead would be 6 million Americans out of a 310 million population. And adding in just 5 wounded for every one killed would add another 30 million casualties to the KIAs.

What would America do if someone had inflicted a proxy terror war carnage on us encompassing 36 million killed and wounded. Would we nuke them? Sure we would, with no hesitation or dissent. So I ask you next, how many terror attacks did Syria launch here in the US for payback? The answer is zero.

One of our tasks in independent media is to help our audience wrap their minds around horrible things going on in the world, when the natural inclination for many is do exactly the opposite, especially when your own country is running with the bad guys. If you acknowledge it, then you would put yourself on the spot as to what you should do to stop it.