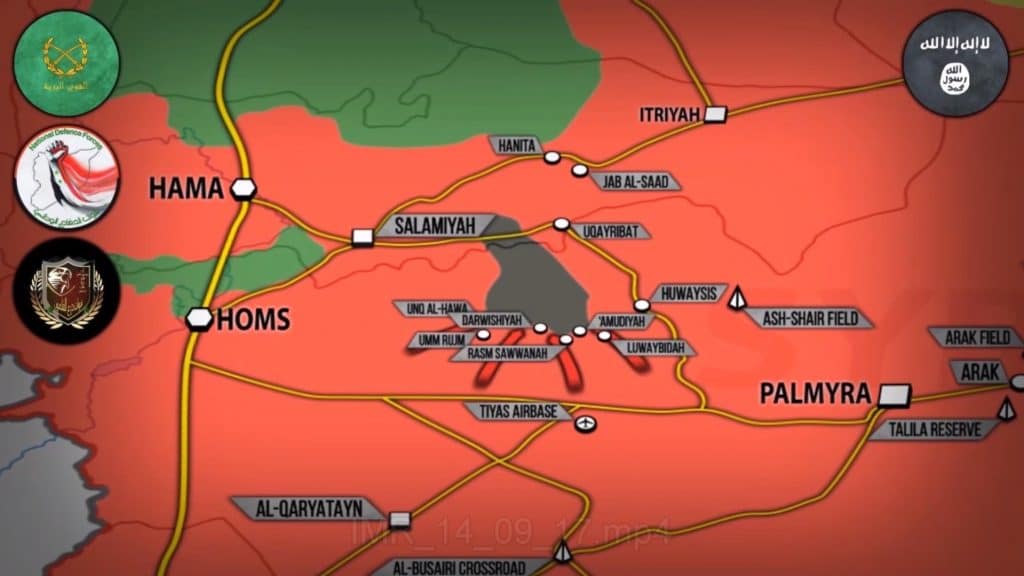 The Syrian Arab Army (SAA), the National Defense Forces (NDF), and the Qalamoun Shield Forces (QSF) have liberated the villages of Um Rujm, ‘Amudiyah, Rasm Sawwanah, Unq al-Hawa, Khan, Luwaybidah, and Darwishiyah from ISIS in the eastern countryside of Salamiyah north of the Homs-Palmyra highway.

Despite strong ISIS resistance, government troops continue developing momentum in the area. The operation was slowed down in late August because the Syrian military redeployed many units to Deir Ezzor province. However, according to pro-government sources, the entire pocket will be liberated within a few weeks.

The SAA and the Syrian Republican Guard have seized the important Rouad mountain and developed an advance in the direction of Baghiliyah on the northwestern flank of Deir Ezzor city. Government troops have also advanced against ISIS in Jafrah and al-Mariiyah.

Government forces are seeking to secure the recent gains and to expand a buffer zone around the city in order to prevent future ISIS counter-attacks in the area.

The US-backed Syrian Democratic Forces (SDF) further advanced in the northern Deir Ezzor countryside and entered the area of al-Husayniyah within about 3km from Deir Ezzor city.

Meanwhile, in Raqqah, the SDF repelled an ISIS attack in the central part of the city killing some 33 ISIS members.

In summing up the recent events, it becomes clear that both the US-led coalition and the Syrian-Iranian-Russian alliance are now consolidating their resources in Deir Ezzor province in a race for strategic areas in eastern Syria, including the Baghdad-Damascus highway and the oil fields on the eastern bank of the Euphrates.