Was the 16th anniversary of 9/11 the historical moment when truth finally hit the big time?

Not quite. The loathesome lies still outnumbered the instances of truthful reporting. The New York Times and Time Magazine, for example, both published stories about the 1,112 people who were apparently completely vaporized on 9/11 — leaving behind not even a fingernail or a bone fragment for DNA analysis — without bothering to ask how a gravity-driven collapse from relatively minor office fires could possibly do such a thing.

For one possible answer to the question of “what could vaporize 1,112 bodies” check out the Veterans Today Nuclear Education Series.

But when a mainstream Alaska newspaper and a big-circulation alternative health and spirituality publication — alongside the aforementioned New York and London papers — see fit to print blistering 9/11 truth pieces, it does seem that progress is being made.

Ground Zero for the 9/11 anniversary circa 2017 (for me, anyway) was the Grand Lake Theater in Oakland, California, home of the 13th annual 9/11 Film Festival.

Click HERE to watch the 9/11 Film Festival, featuring talks by William Pepper, Anthony Hall, yours truly, and others, as well as some great new films. 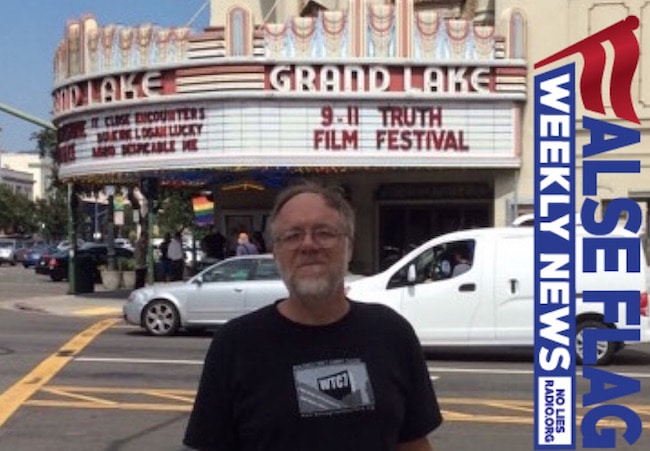 Many hundreds of people attended, filling the hall, surpassing the organizers’ expectations and demonstrating that the 9/11 issue is still alive and kicking.

Will we 9/11 truth-seekers ever manage to pull the rabbit out of the hat, fully exposing the “hijackers” misdirection ploy and the larger magic trick of the 9/11 cover-and-deception operation — forcing the terrible truth down the throat of the fake news media and the public,  ending the 9/11 wars, and restoring the Constitution?