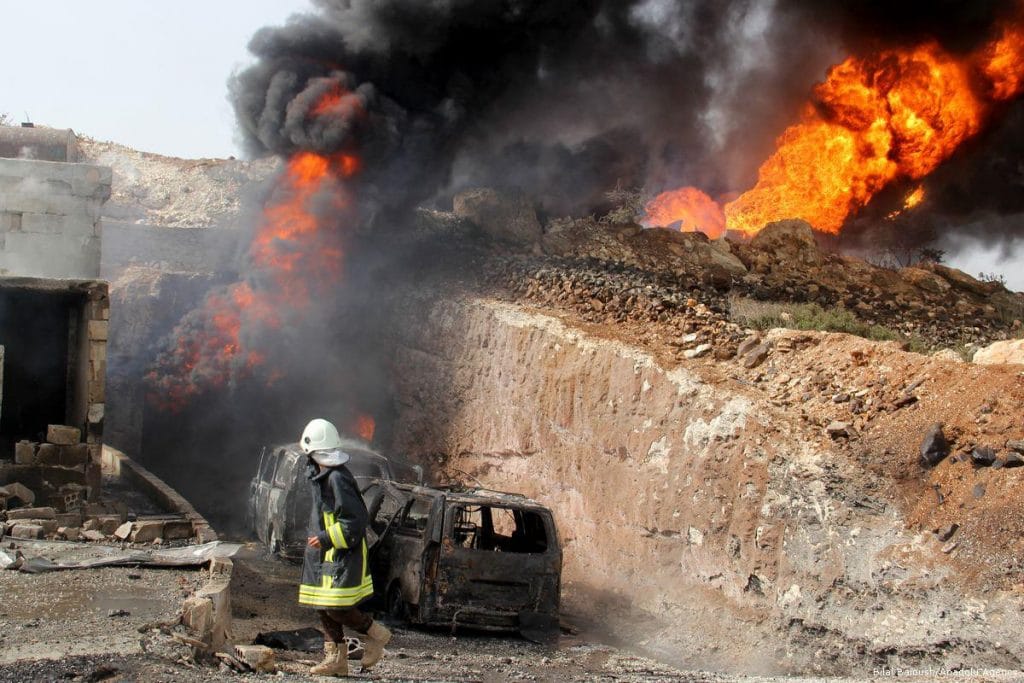 [ Editor’s Note: This was good but expected news from Astana, where all three guarantors are aboard the deconfliction arrangement not only by agreeing to it, but also manning checkpoints to layout and enforce the borders between the designated jihadis and “opposition” groups.

This will primarily box  in the main HTS  Al-Qaeda group which has been taking over the smaller ones to get their ammo dumps and territory in anticipation of this agreement.

We will now have a geographical map for who can be bombed, and if HTS attacks any of the deconfliction groups they can have a coalition defense, including air power.  In the past, deconfliction groups have offensively fought the designated terrorists in their area, but no details on that for Idlib.

Missing at this point is the big question of whether Turkey is going to block arms and weapons shipments across its border into Idlib. The next question would be what would Iran and Russia or Syria do if Turkey allows such resupply, playing both sides against the middle despite its seeming to need to be on good terms with the other parties due to the Kurdish issue on the front burner now.

The other good news is preliminary reports from Russia claiming the SAA is over the Euphrates at Deir Ezzor. We are looking for more information and will post when confirmed by Damascus… Jim W. Dean ]

Russia, Iran and Turkey have agreed on the boundaries of the final de-escalation zone in Idlib, Syria, the parties said in a joint statement. All four de-escalation zones in the war-torn country will remain in force for a period of six months.

The proposal to establish four de-escalation zones was signed by Russia, Iran and Turkey, with the approval of the Syrian government having been received in May 2017 in Kazakhstan’s capital, Astana.

The de-escalation zones, proposed by Russia, are aimed at separating extremist groups, including Islamic State terrorists (IS, formerly ISIS/ISIL) and Jabhat al-Nusra (Al-Nusra Front), from the moderate opposition.

The three states “announce the creation of the de-escalation areas … in eastern Ghouta, in certain parts in the north of Homs province, in Idlib province and certain parts of the neighboring Latakia, Hama and Aleppo provinces and also in certain parts of southern Syria,” the statement, read by Kazakhstan’s Foreign Minister Kairat Abdrakhmanov, said, following the Astana-6 peace talks in the Kazakh capital on Friday.

The de-escalation zones aim to help “maintain the ceasefire, to ensure the territorial integrity of Syria and continue to fight terrorism,” the statement added. They are “a temporary measure which will initially last 6 months and will be automatically extended on the basis of guarantors’ consensus,” according to the statement.

The initiative on the de-escalation zones does not “undermine the sovereignty, independence, unity and territorial integrity of Syria.”

The guarantor countries have decided to introduce a joint Iranian-Russian-Turkish Coordination Center “to coordinate activities in the de-escalation areas,” according to the statement.

The armed Syrian opposition taking part in the peace negotiations has welcomed the Russian-Turkish-Iranian initiative. The “de-escalation of tensions in Idlib province with a population of about 3 million, has finally been reached,” delegation member Ayman al-Asymi said, as cited by Interfax.

“We have finally reached the moment when we can protect civilians,” he said

The memorandum agreed upon in May provides that any fighting between government forces and armed opposition will cease within the safe zones.

Checkpoints and observation posts are to be positioned along the de-escalation lines within the safe zones. They will provide free movement of unarmed civilians within, and humanitarian access to, the areas under the guarantor states’ control.

UN Secretary-General António Guterres welcomed the memorandum at the time, saying that it was “crucial to see this agreement actually improve the lives of Syrians.”

“Observers from these three countries will be deployed at check and observation points in safe zones that form the borders of the de-escalation zone,” the ministry said, as cited by Reuters, “The main mission of these observers has been defined as the prevention of clashes between the regime and the opposition forces, and of any violations of the truce.”

Russia has repeatedly stated that the de-escalation zones are part of a plan to curb violence in Syria. They are a temporary measure intended to pave the way for peace talks and a resolution to the six-year armed conflict in Syria.

“This is not a permanent measure and nobody among those who supported the creation of those zones has an intention to keep them forever and, in effect, create some kind of enclaves in Syrian territory for years to come,” Russian foreign minister Sergey Lavrov said earlier in September.

The violence in Syria seems to be toning down as Islamic State (IS, formerly ISIS/ISIL) is losing the last vestiges of its territory. In the latest development, the Syrian Army took control of oilfields and a gas refinery near the city of Deir ez-Zor. Syrian Army troops backed by Russian air support managed to break the three-year-long siege of the city of Deir ez-Zor on September 5, following fierce clashes with IS terrorists on its outskirts.

On Tuesday the Russian Defense Ministry said that Syria’s military had liberated around 85 percent of the country’s territory from the control of insurgent terrorists.