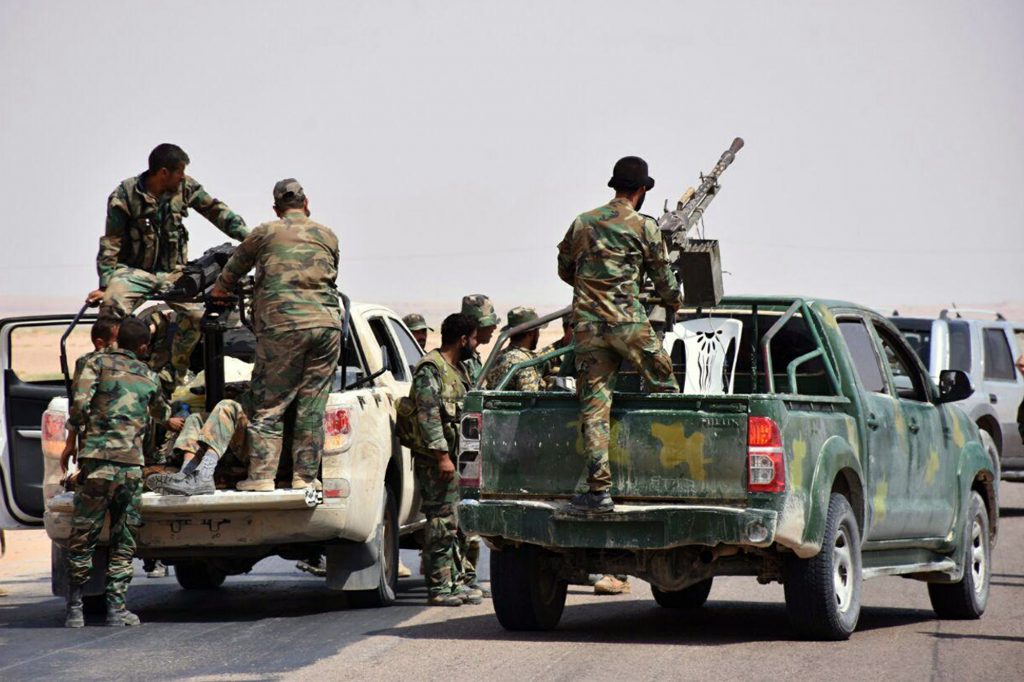 Update: Saturday night. Reports from Syrian are claiming that the SAA is going to cross the river south of the city so as to box ISIS in where they are so they can’t escape south. I can’t see that because it would destroy more of the city and cause more civilian casualties.  They have a very good spot just north, where they are right on the river, with good open land on the other side with multiple secondary roads to deploy an attack.

The main road to the industrial zone is just south if they wanted to face off with the SDF to stop their advance into the oil fields. The Kurds are getting close to the city now and I don’t suspect they are there in strength, but we shall know soon…JD

[ Editor’s Note:  VT is staying in daily contact with Kurdish forces.  We are offering our good offices where such is consistent with US statute.  No one else is still trusted by both sides.g

I was surprised to see Damascus holding back on what its position would be on the Kurds claiming that they would take whatever territory in Deir Ezzor province they could, despite the SAA making a huge investment, way more than the SDF in liberating the province.

This revealed the “warlord” mentality the Kurdish SDF has now because of the US  backing its current aggression, taking military action in traditional Arab areas as part of its own partition plan to take as much land and resources in Syria to have more leverage in the future peace talks.

The US has no legal right to support such an effort, but will do so until it sees some unacceptable risk to it behavior. Today we see the US wicked witch of the UN Nikki Halley, trotting out the old “Assad must go” theme for Syria to become stable when it is the US that must go to obtain that goal. I think “Haley  must go”.

Stability for the US is interpreted as everything being under US control via a puppet government. This is nothing new as it has been the foundation of our “exceptional” US post Cold War policy, a unipolar world dominated by the US crime syndicate versus a safer for all, multi-polar power structure.

Turkey’s attention will be focused on northwestern Syria deconfliction zone, as Turkish media tells us that 25,000 Turkish troops will be enforcing its area. This seems very high, and begs the question of will Iran and Russia also move 25,000 troops in each, to monitor their areas? And if not, why were so many allotted to Turkey?

Turkey must know that the more territory that the SDF grabs from Syria proper, the more aggressive it will be for partitioning Syria and pushing for independence, which the US will also want as the booby prize in its lost plan to take over Syria. It was a gross violation of the UN charter and one which should get it kicked of the Security Council, but its members wisely left no mechanism for their respective removals.

We are now seeing the former proponent of freedom and democracy becoming a hollow shell of that public image, and like the Israelis, not caring much about what anyone thinks about it. The worst part for us at VT is watching our military and Intel people being turned into co-opted  mercenary assets for the Deep Staters, who have never even been listed a a threat to the US when they have always been clearly so. I fear  greatly for us all …Jim W. Dean ]

Tensions are growing between Syrian government forces and US-backed forces in the Syrian province of Deir Ezzor as the both sides are competing for the countryside of the provincial capital.

Late on Friday, a commander of the Deir Ezzor Military Council [a part of the US-backed Syrian Democratic Forces], Ahmed Abu Khawla, claimed that US-backed force will not allow the Syrian Arab Army (SAA) and its allies to cross the Euphrates River.

“We have notified the regime [Syrian government] and Russia that we are coming to the Euphrates riverbank, and they can see our forces advancing,” he said, according to Reuters. “We do not allow the regime or its militias to cross to the eastern riverbank.”

The US-led coalition and its Kurdish-dominated coalition of various militias known as the Syrian Democratic Forces (SDF) are seeking to divide eastern Syria into two parts using the Euphrates River as a kind of separation line or even to capture additional areas on the western bank of Euphrates if they get a chance.

The SDF launched its advance against ISIS north of Deir Ezzor after the SAA crushed a main ISIS force in the area in a fierce battle southwest of the city. Since then, the SDF has made a notable gains and reached Deir Ezzor city from the northern direction. However, the internationally recognized Syrian government, backed up by Iran and Russia, is not going to drop its plans to re-capture all possible areas that are now under the control of ISIS.

On Friday, spokesperson for the Russian Foreign Ministry, Maria Zakharova, said that the SAA had already crossed the Euphrates and gained a foothold there.

Pro-Kurdish/US sources denied this claim. Considering the ongoing media blackout in an area of the Euphrates River near Deir Ezzor city nothing could be said decisively. No side has provided photos or videos confirming the river was crossed or was not crossed by government troops.

Later, an aide to Syrian President Bashar al-Assad, Bouthaina Shaaban, said that government forces will fight against any terrorist or illegitimate foreign force in its effort to liberate the whole country.

“Whether it’s the Syrian Democratic Forces (SDF), or Daesh [ISIS] or any illegitimate foreign force in the country… we will fight and work against them so our land is freed completely from any aggressor,” she said in an exclusive interview with Lebanon-based al-Manar television network.

She added that the SDF has gained areas north of Deir Ezzor from ISIS “without any fighting,” highlighting that the SDF just used the SAA operation against ISIS in Deir Ezzor to seize oil-rich areas east of the city.

On Saturday, clashes continued in the countryside of Deir Ezzor as the SAA and the Syrian Republican Guard further pushed against ISIS northeast and southwest of the city. Earlier, they liberated Huwaijat, Muraieiah and Ayyash near the city expanding their control over the river bank.

This operation shows that the SAA is not going to push towards the Iraqi border soon. Instead, government forces are focusing on consolidating their gains in the Deir Ezzor countryside and crushing ISIS units remaining in the area.