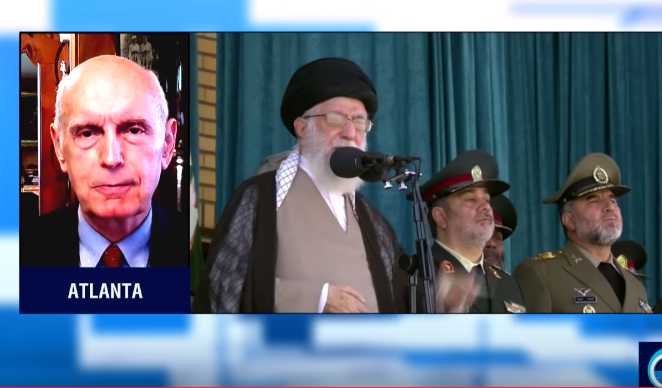 [ Note: This was a vague threat by Khamenei, but politically he is domestically required to stand up to bully America as the Iranian people are so tire of being treated like a colony. Iranians are nothing if not a proud people.

Trump has obviously made a deal with Netanyahu and Saudi Arabia, with their Syrian plans failing, that he would try to make it up to them by sticking it to Iran with more sanctions.

But screwing up the investment deals all the other countries have worked on will build up a growing animosity of  from long time allies, that they are being treated like colonies themselves via the ripple effect of new sanctions on Iran.

In another world, aiders and abettors of terrorism, like Israel, the US and the Saudis would be sanctioned off the planet themselves, but not on this one. Every time the US uses the term “our interests”, it is like scratching the world’s scab, as all know that means “at the expense of your interests”.

I am still wondering on how the World Trade Organization rules left the door open for the US to dish out this treatment unilaterally. Maybe someone can tell us in the comment board below … JD ]

The Leader of Iran’s Islamic Revolution has condemned the US government’s policy on the Iran nuclear deal. He warned any wrong move regarding the agreement will face the Islamic Republic’s firm response. Ayatollah Seyyed Ali Khamenei noted that any retreat by Iran from its position will embolden the enemy.

The Leader also described the US government as one of the most evil regimes of the world. He said during the nuclear talks Tehran agreed to relinquish part of its rights but Washington is now violating all of its commitments under the agreement.