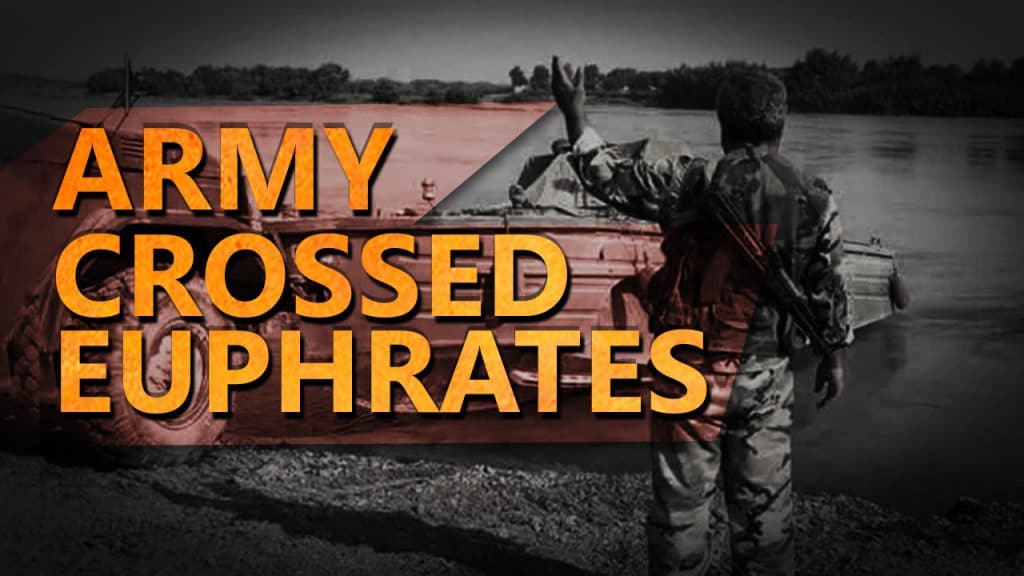 The Syrian Arab Army (SAA), Hezbollah, the Iraqi Army and the Popular Mobilization Units (PMU) are preparing for a joint advance on the ISIS border strongholds of al-Bukamal and al-Qaim.

On Saturday, the Iraqi Army and the PMU launched an anti-ISIS operation in the border area, liberated the border town Akashat, the H-3 station, Akashat factory and the Akashat housing complex, and secured a road linking it with the Damascus-Baghdad highway.

At the same day, the SAA and Hezbollah, supported by Liwa Fatemiyoun, Liwa Haydaryoun, Liwa al-Zainabyoun and the National Defense Forces (NDF), captured al-Rutimah, Ghizlaniah and the desert area north of Sharat al-Wa’ar.

On Sunday, Syrian and Iraqi forces officially met on the border near Akashat. The SAA and Hezbollah deployed several special force and armoured units right on the border line. According to the UK-based Al-Araby Al-Jadeed newspaper, the sides had agreed to establish three joint positions there.
Damascus gave Iraqi forces a permission to enter 10km deep inside the Syrian territory if needed. Iraqi sources claimed that some Syrian battle tanks and armoured vehicles of entered the Iraqi territory and joined Iraqi units.

The expected joint push towards al-Bukamal and al-Qaim will ease a battle against ISIS in the border area. Furthermore, many PMU factions particiapte in an anti-ISIS campaign of the Syrian government inside Syria. Units of these factions could cross the border and to assist the SAA in its advance towards al-Bukamal.

On Saturday, the US-led coalition officially accused Russian forces of striking a position on the eastern bank of the Euphrates near the US-backed Syrian Democratic Forces (SDF) and coalition troops. Six SDF members were injured, according to the SDF statement. The alleged strike came after SDF representatives had repeatedly threatened to strike Syrian government forces if they attempt to cross the Euphrates in the Deir Ezzor countryside.

On Sunday, the Russian Defense Ministry rejected these claims adding that Russian forces strike only ISIS positions and the US had received a notice about this in advance. Russian Defense Ministry spokesman Major-General Igor Konashenkov added that the Russian military has not observed any fighting between ISIS and SDF in the northern countryside of Deir Ezzor over the past few days. “Therefore, only representatives of the international coalition can answer the question as to how ‘opposition members’ or ‘military advisers of the international coalition’ managed to get to the IS-held areas in the eastern part of Deir Ezzor without striking a blow.”

The SAA and its allies have liberated Jafrah, Ayyash, the Hujeif mount, Muraieiah, Hawayej, Hawayej Abu Arab, Ain Abu Jumah and Hajj Hammoud as well as some nearby points on the both northwestern and southeastern flanks of the city.

On Monday, Syrian forces crossed the Euphrates east of Deir Ezzor. Since start of September, the SDF and pro-SDF sources have repeatedly claimed that they will not allow the SAA to cross the Euphrates. So what now?