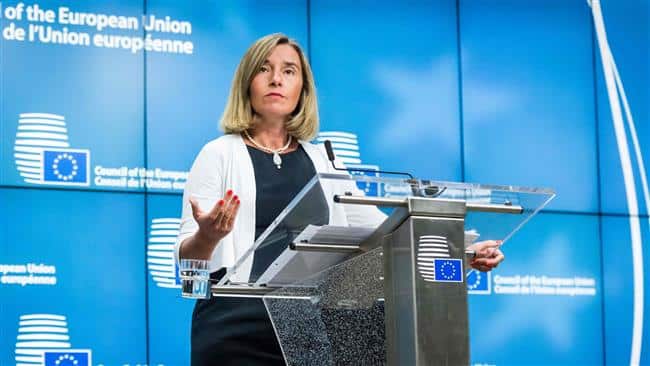 [ Editor’s Note:  Iran’s president Rouhani’s comments a few days ago about the US paying a heavy price for breaching the Iran nuclear deal were not a threat of military action, but the US continuing to isolate itself on the world stage diplomatically.

Mogherini used strong language in showing not only EU support but using the term “belongs to the whole world” in support of the JCPOA. It is clear that she agrees with President Rouhani.

That has been kept low key in our controlled media, but revealed below, is that Britain, predictably 100% with the US on foreign policy, is not on board the Trump “It’s a bad deal” mantra, proof of just how isolated the US will be if it walks away from the deal.

I just did the Press TV post Trump UN speech coverage, which was a punishment for me to have to listen to, what I called Trump’s, bi-polar foreign policy. He is for collective action when everyone else does what the US tells them to, but then he is “Mr. go it alone” when they will not, an embarrassing thing to watch him say to a UN audience who knew what a moral and diplomatic fraud that was.

Trump in not going it alone on his Iran threat hype, but has a secret agreement with Israel and the Saudis, a retribution maneuver to try to kill the Iran nuclear deal and sell the world on Tehran being the big honcho center of terrorism, which only the NeoCon koolaid drinkers really buy.

Trump is American unexceptionalism at its best, or maybe I should say its worst, and that makes him what he claims others to be…a serious threat. The defense budget numbers published today showed $640 billion for “basing alone”, but without a breakdown on the foreign basing cost.

His description of the current Mideast situation was a Mother Goose story, a complete fiction, which everyone listening to his speech, including Niki Haley, was well aware. He is selling us that the Syria people have not supported Assad the dictator, when we know from our own significant sources there that they know the US supported the use  of proxy terrorism against then in the pursuit of “it’s interests”.

We will see what Americans have to say about the speech, as in are they so numbed out as to just swallow it whole. Frankly I am quite worried, as I see them do it so often … Jim W. Dean ]

European Union’s foreign policy chief, Federica Mogherini, says the nuclear agreement signed between Iran and the P5+1 group of countries works fine and belongs to the entire world, not just the United States.

“I have said many times that the agreement is working fine, [and] the IAEA (International Atomic Energy Agency) [has] confirmed several times that Iran is fulfilling its obligations,” Mogherini said on Monday.

Commenting on the possible US withdrawal from the nuclear deal, known as the Joint Comprehensive Plan of Action (JCPOA), she said the agreement was not signed with one country.
“This deal belongs to the international community,” the top EU diplomat said.

US President Donald Trump, who had made no secret of opposing the nuclear agreement in his election campaign, has threatened to “tear up” the agreement, calling it “the worst deal ever negotiated.”

The United State, which is a party to the landmark nuclear agreement, seems to be laying out a case for abandoning it, with Trump having expressed his readiness to declare Iran in breach of its side of the JCPOA as early as next month.

However, Washington’s European allies seek to prevent the collapse of the deal and are stepping up efforts to convince Trump not to abandon it as world leaders have gathered in New York for the 72nd annual session of the United Nations General Assembly.

Mogherini added that she acknowledged the EU’s task to make sure that all parties to the JCPOA were fully implementing their obligations under the deal.
Iran and the five permanent members of the United Nations Security Council – the United States, France, Britain, Russia and China – plus Germany signed the nuclear agreement on July 14, 2015 and started implementing it on January 16, 2016.

Under the JCPOA, Iran undertook to put limitations on its nuclear program in exchange for the removal of nuclear-related sanctions imposed against Tehran. The senior EU official further noted that the ministerial meeting of the Iran-P5+1 Joint Commission monitoring the implementation of the JCPOA would be held on September 20.

In a separate development, British Foreign Secretary Boris Johnson also on Monday expressed his country’s firm support for efforts made to ensure implementation of the JCPOA.

In a meeting with Iranian Foreign Minister Mohammad Javad Zarif in New York, the two sides stressed the importance of improving bilateral relations and discussed ways to enhance banking and consular cooperation.

Zarif and Johnson also exchanged views on leading regional issues, including the developments in Iraq, Syria, Yemen, Bahrain and Afghanistan.*