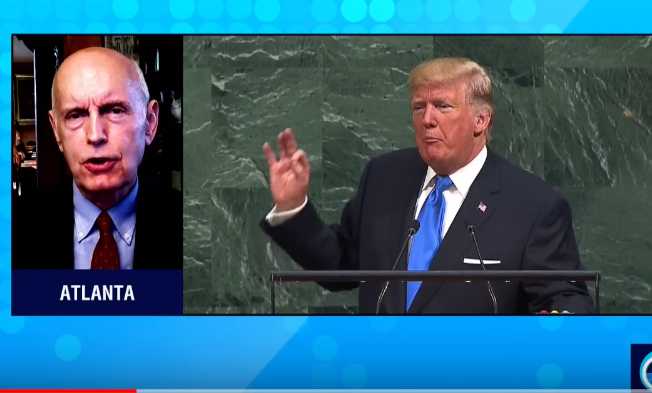 [ Note: While it is always a good break to analyze historic shows like a state of the union address, or a UN talk in this case, it was sheer torture having to listen to Trump’s entire diatribe. His speech-writing staff did the country a disservice in participating in the “Gonzo goes to the UN” show.

The man would take one position, and then a few minutes later reverse himself, perhaps typical sociopathic conduct of those who make the rules up as they go along.

He makes a big deal over wanting to create and lead a united consensus in standing up to rogue nations, while giving Israel a free pass. And then a few minutes later, he is saying America will go it alone, even breaking a deal it has made.

His remarks about Iran were over the top, ignoring the huge political reforms that country has gone through, and falsely portraying the Iranian people like the former Soviets living under the Red Terror. Were his speech writers smoking crack when they dreamed this stuff up?

And then we had Assad portrayed as a monster when he has led his country to safety, surviving a terror war inflicted upon Syria with US fingerprints everywhere, not the least of which are the countless YouTube videos of the Syrian opposition and ISIS using American TOW missiles to kill Syrian armor, while the Syrians were engaged in defending their country from US- and Gulf State-backed terrorists.

Trump will never be able to wash this off; and in a way, maybe we should be pleased to have this speech as a window to see this man for what he really is – a Deep State puppet, right out of central casting really… JD ]