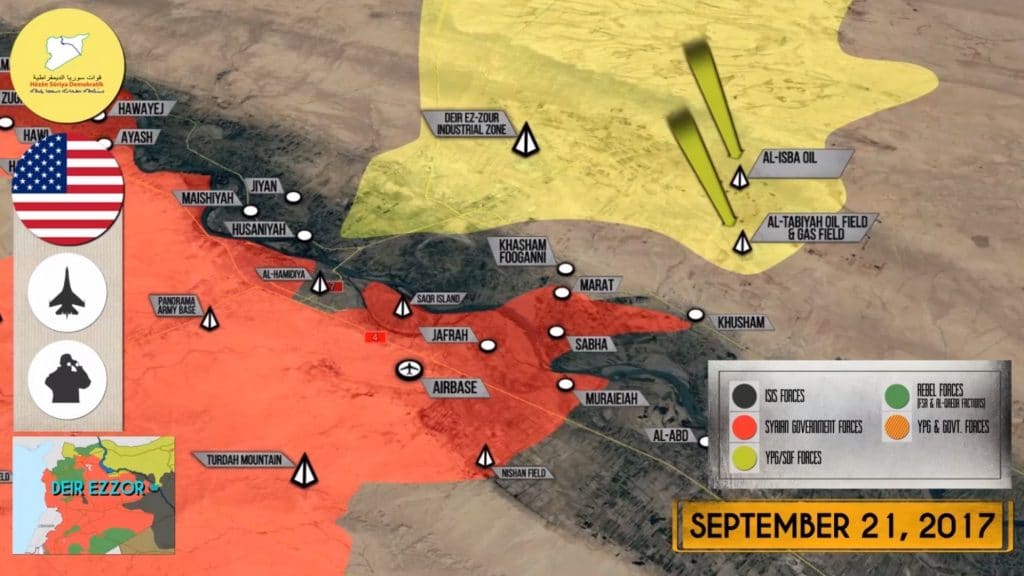 Early on Friday, the Israeli Air Force struck a target in the Damascus International Airport, according to pro-opposition sources and the Israeli media. There are no details about the damage caused by airstrikes. Pro-Israeli sources claim that the Israeli Air Force targeted a part of the airport used for providing supplies to Hezbollah.

At the same time, reports appeared that the Syrian Air Defense Forces downed “hostile aircraft”, most likely an Israeli reconnaissance drone, over the Damascus countryside.

With this advance, the SDF at least partly blocked an advance of Syrian government forces on the eastern bank of the Euphrates. This and future possible SDF successes in seizing oil and gas infrastructure will directly affect the negotiations between the sides after the defeat of ISIS.

In the city of Raqqah, the SDF, supported by coalition aircraft and artillery, killed 63 ISIS fighters and destroyed 3 VBIEDs as well as further advanced inside the ISIS-held area. Pro-SDF sources claim that the ISIS is on the run and the city will be freed soon.

ISIS fighters in the eastern Hama pocket and the Syrian government have reportedly reached a withdrawal agreement. The agreement will allow ISIS members to withdraw to Idlib or Deir Ezzor provinces, according to different sources. The agreement will allow the Syrian military to free additional forces for operations across Syria. On Wednesday, the Syrian government allowed 1,500 civilians and ISIS family members to withdraw to an area controlled by Hay’at Tahrir al-Sham in Idlib.

Turkey will deploy troops in Syria’s Idlib province under as part of a “de-escalation” agreement reached by Ankara, Tehran and Moscow within the Astana format of talks on the Syrian conflict, Turkish President Recep Tayyip Erdogan told Reuters in an interview.

Meanwhile, reports appeared that Turkey deployed more forces additionally to on the border with Syria’s Idlib province. The reinforcements strengthened a grouping of 80 armoured vehicles and 18 MRAPs that had been deployed earlier.