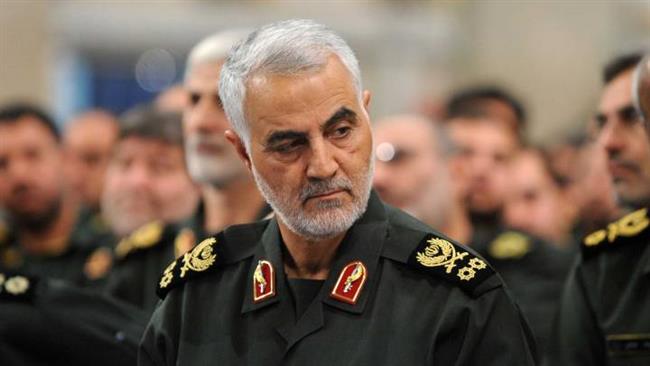 [ Editor’s Note: Corporate media avoids covering General Soleimani much. He gets the silent treatment from them, other than the occasional pot shot so there is something negative to find for newbies doing internet searches on him.

And the reason for that you will see a very good example of below. The man is walking kryptonite in terms of destroying the Western continuing hoax of Iran the big threat, and even more ludicrous, the main supporter for terrorism in the region.

The contempt this shows, by all those involved in this mass disinformation crime, including many parts of the American government against the rest of the world, and especially the American people, is beyond the pale.

Soleimani has a concise and bullet proof message… and you will instantly understand the reason for his “light coverage”.  Standard current US geopolitical propaganda psyops focuses on framing anyone being able to defend themselves from American domination and aggression as a threat, so they can be subjected to financial sanctions and military action, as an intimidation to others.

I view this simply for what it is – an intense form of disinformation terrorism in itself. The right to all nations under the UN charter to self defense is simply waived away via the US preemptive strike doctrine, which says the US reserves the right to attack anyone that it feels “might” become a threat in the future. Such a policy can only be desired by a rogue state, one that is a threat to everyone else.

Not many Americans have much of a clue about this. When I talk to otherwise intelligent people about it, 95% of the time I get no reaction at all. We know with the perennial low approval ratings on Congress that Americans don’t trust the government and politicians in general, but when it comes to national security, they will swallow anything that mother bird will put into the mouths of its new babies.

One of the depressing parts of doing this work is this never ending “whatever” response by the majority of Americans to having the Fake threat scam fed to them in a steady diet.

Even worse is the officer corps, whose attitude is “it’s none of our business”, “it’s above my pay grade”, and “the military has to accept authority from civilian leadership and do whatever it is told”, etc.

When I ask how they feel about the military as a whole, specifically its failure to live up to the part of the oath dealing with domestic enemies, I can always tell that the topic has never come up in a discussion before. I see a blank look on their faces.

I have to recite “and to defend the country from all enemies, foreign and domestic“, then a little light comes on, a faint one… but they really don’t know what to say. It is completely off their radar screen.

As you will see below, General Soleimani does know what to say, as he wears no rose-colored glasses, and his brain has all of its cylinders working. When listening to speeches from our own top command, if we close our eyes and forget they are wearing a uniform, we would think we are listening to a politician, and all the baggage that comes with that.

“Perception management” is a big thing in the military now, and has been for some time. If you want proof, count on your hand how many top commanders have warned about the threat of Israeli espionage in the country, currently and historically.

They won’t even discuss this after they retire. They are afraid of being punished; so they give themselves permission to abandon us, when a lot of them know how pervasive the espionage is. And some will even work for the Israelis. It is one hell of a sad state of affairs, and I see no changes coming on the horizon… Jim W. Dean ]

“Iran, Russia, Syria, and Iraq should hold this celebration,” said the general at a ceremony held in memory of an Iranian military adviser martyred in Syria.

The commander further slammed the US for its inaction in the face of Daesh terror activities and said Washington “has made no move to eradicate” the terror outfit.

“How can an administration, which created Daesh itsef, claim to have played a noticeable role in fighting the outfit?” asked the senior general. “The US’s defeat in the region is rooted in the lack of a wise leadership and having ignorant rulers.”

In recent months, the Iraqi and Syrian armies have been dealing heavy blows to Daesh, ridding the terror group of its main strongholds in the neighboring Arab countries.

At Baghdad and Damascus’ respective requests, Iran has been providing military advisory support to the countries’ militaries in their counter-terrorism operations.  Russia has also been providing the Damascus government with military assistance in the face of terrorists.

Soleimani further said there are three reasons why Iran is standing by Syria in the fight against terrorism.

First, he said, the Takfiri outfit – which brands those not subscribing to their radicalism as “apostates” — “consider killing us to be an imperative.”

Secondly, the general said, the terrorists seek to use Iraq and Syria as a bridge leading to Iran, noting, “We could not sit around to see Iraq and Syria fall, and then they reach us.”

And thirdly, the Islamic Republic has to defend itself against the enemy’s goal of obliterating its independence and existence, he added.

On June 7, Daesh gunmen mounted almost simultaneous assaults on Iran’s Parliament and the Mausoleum of the late Founder of the Islamic Republic Imam Khomeini. The twin attacks killed 17 people and injured over 15 more,

In August, General Qassem Soleimani said Iranian forces would not rest until they have taken out every last terrorist from the face of the Muslim world after Daesh reportedly beheaded an Iranian military adviser in Syria.