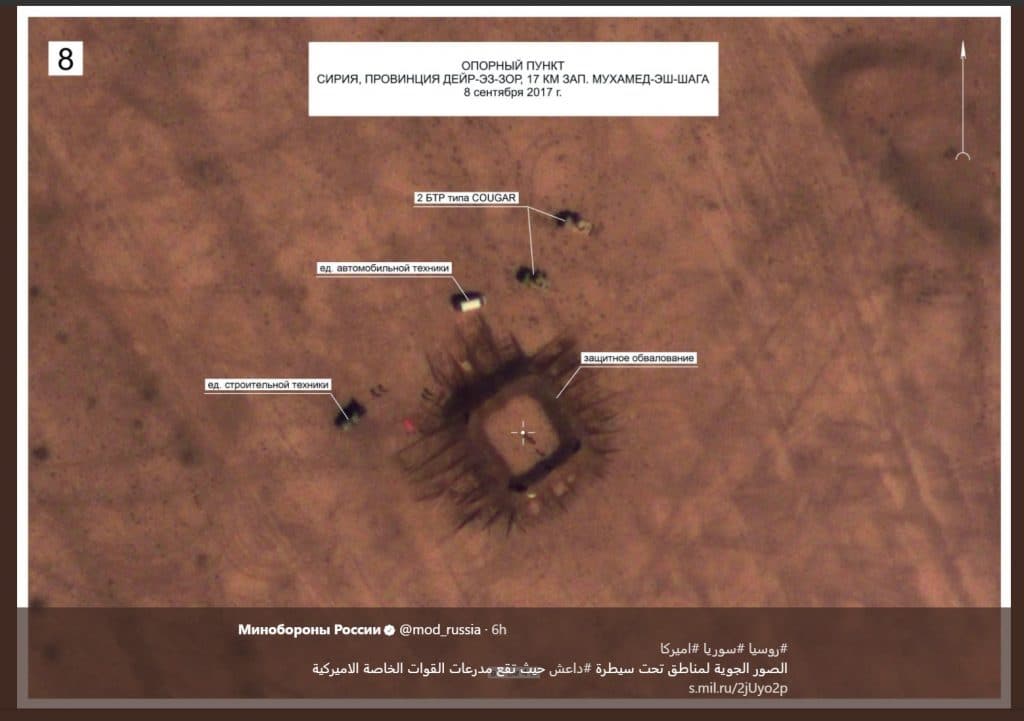 [ Editor’s Note 2: Gordon went to the Russian ministry of defense to get the best quality photos, as they are needed to drive home two messages. One is that we have photographic proof of US advisers, Special Ops, or whatever you want to call them seeming to be able to operate inside and/or near ISIS held areas.

Or two, these ISIS held areas can sometimes be SDF people dressed up as ISIS, depending what central casting in Hollywood has called up for the extras to dress as for the day.

But there is a third questions. The Russians have obviously had these photos for days and maybe even weeks now, so why have they been hiding them at this critical stage of the war with the SDF now coming deep into traditional Arab territory in what is clearly and army of conquest now, with the US fully onboard.

With ISIS pushed out of so many areas, and so many of the killed, or “gone to Idlib”, who do we see Damascus showing signs of a shortage of manpower. I watched a video of SAA troops opening an new flank on Saquir Island south of Deir Ezzor. They were using on rubber boat being pulled back with a rope to shuttle troop across a narrow water barrier.

At a minimum then needed two, with the second boat shuttling over the ammunition that is typically needed to sustain and offensive, and especially reserve ammunition to handle counter attacks where running out can be a death sentence.

The ammo boat would also usually be carrying heavy crew manned machine guns, yet I have not seen a single one in any of these crossing videos, nor have I seen any RPG men with their backpacks of triple shot loads with any of these platoons going into combat on the west side of the river.

We thank the Russian command for these photos. Please send more, and send them sooner…  Jim  W. Dean ] 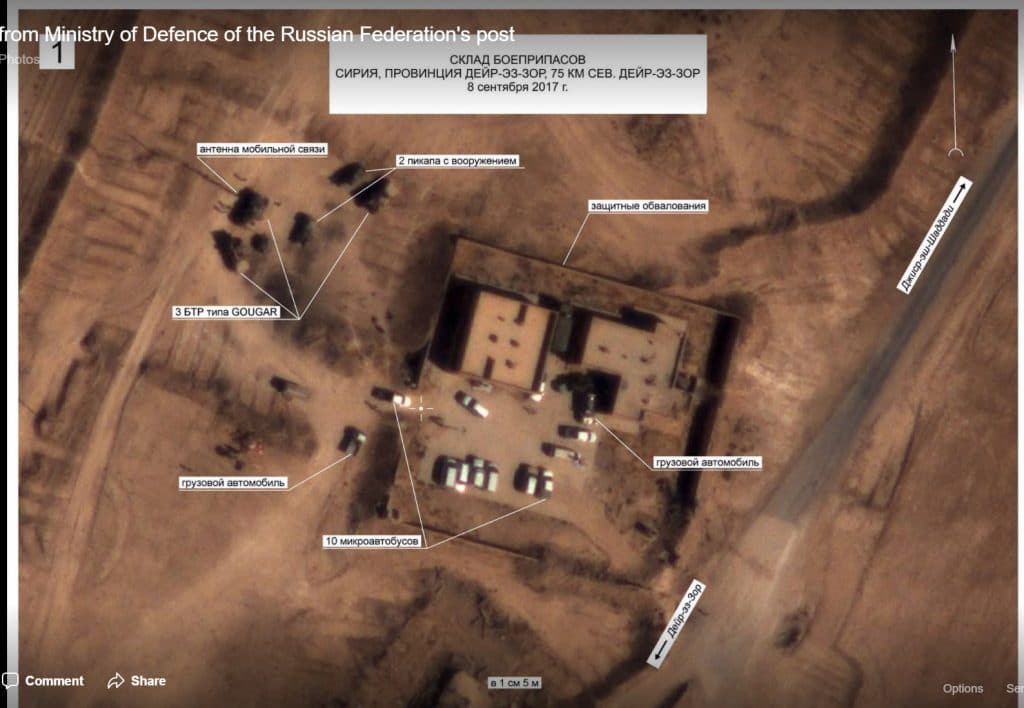 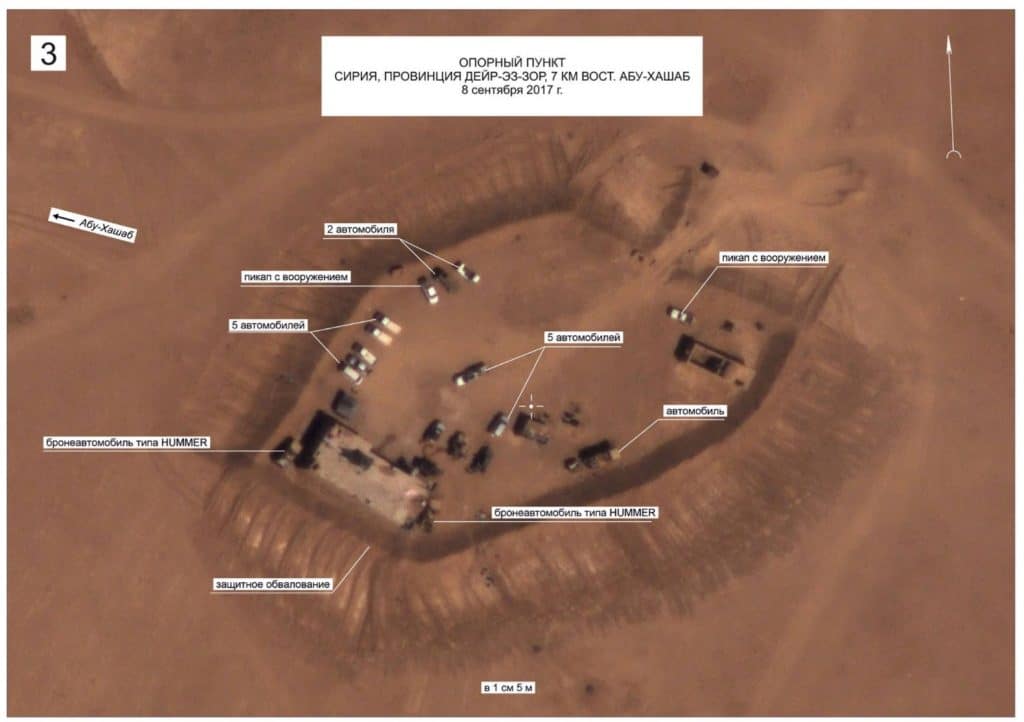 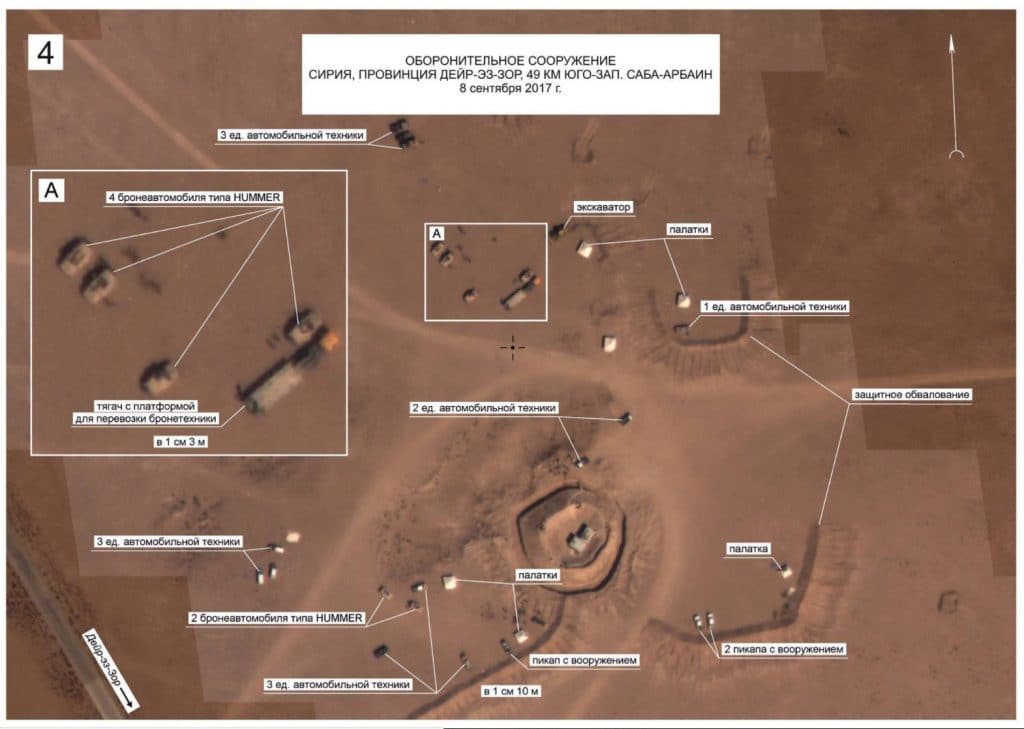 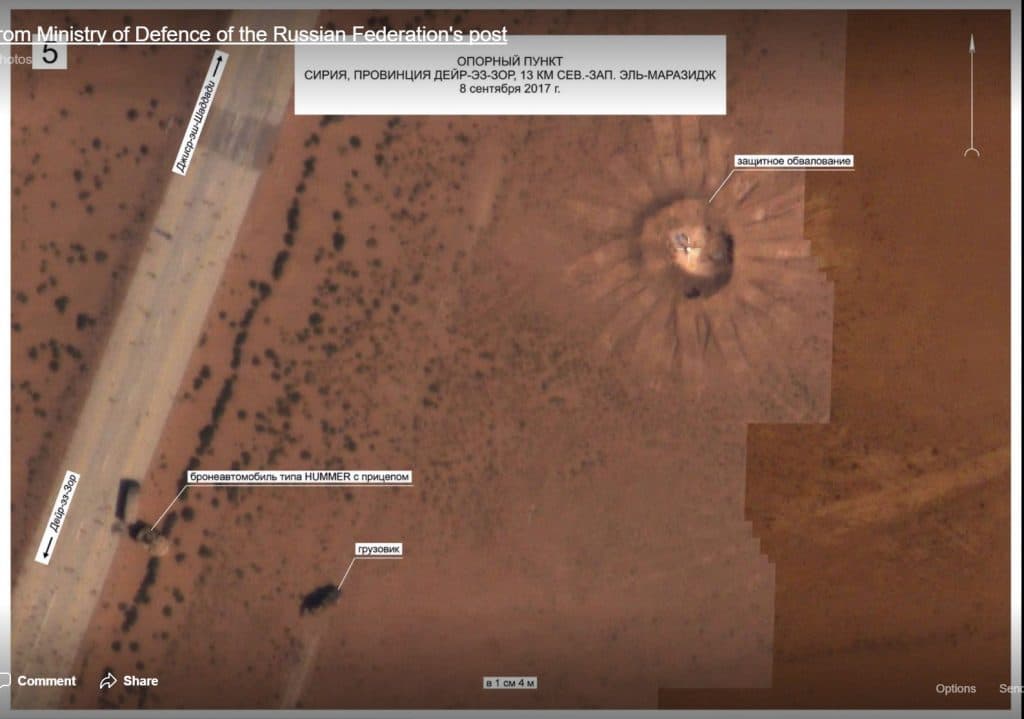 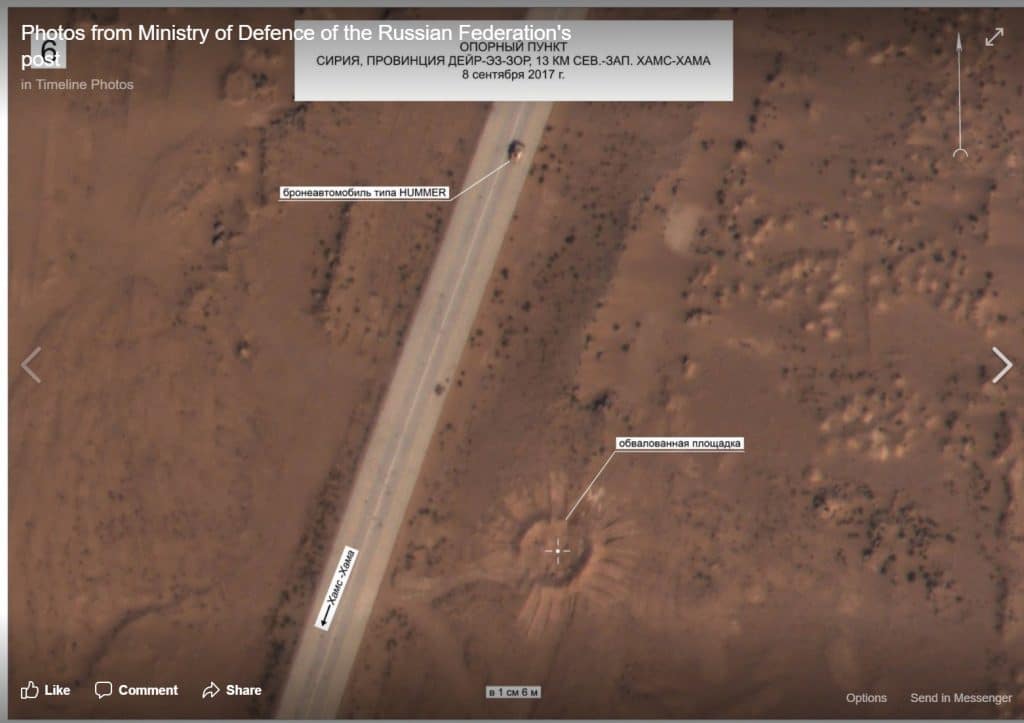 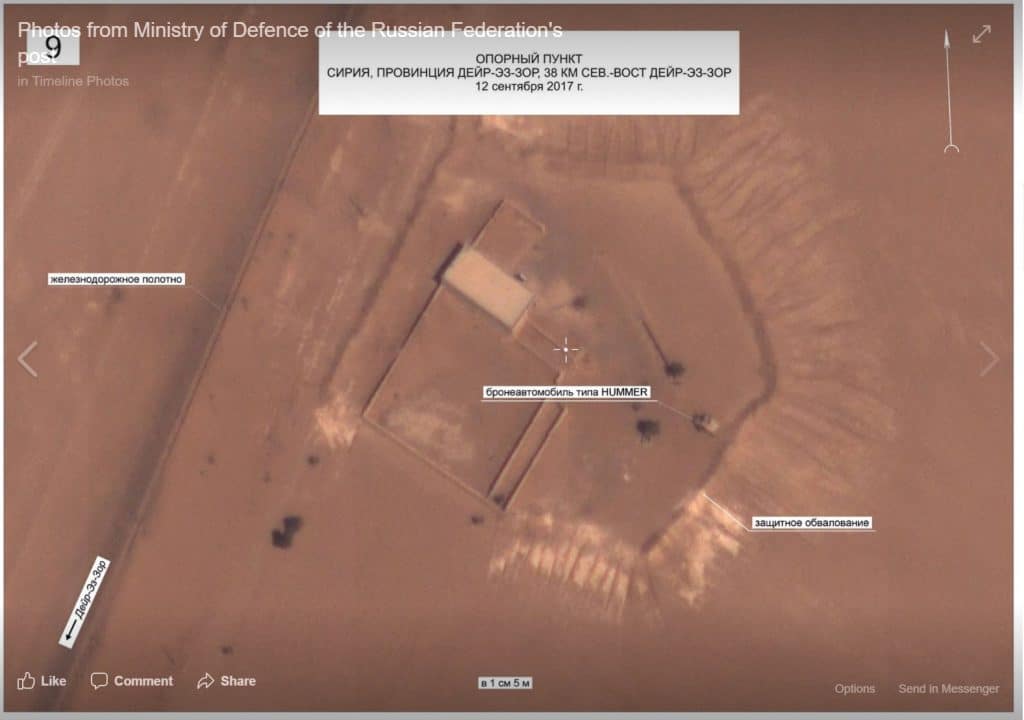 Editor’s note:  As US and SDF forces “defeat” ISIS near Deir Ezzor, it is now revealed that US and ISIS forces attacking Syrian Army positions are in fact one in the same.  As long suspected, the US is supplying equipment and arms to ISIS, is safeguarding their leaders and fighting a totally phony war while in fact running the ISIS organization.  Were one to say ISIS is commanded by Donald Trump, one would not be making a misstatement of any kind. Gordon Duff 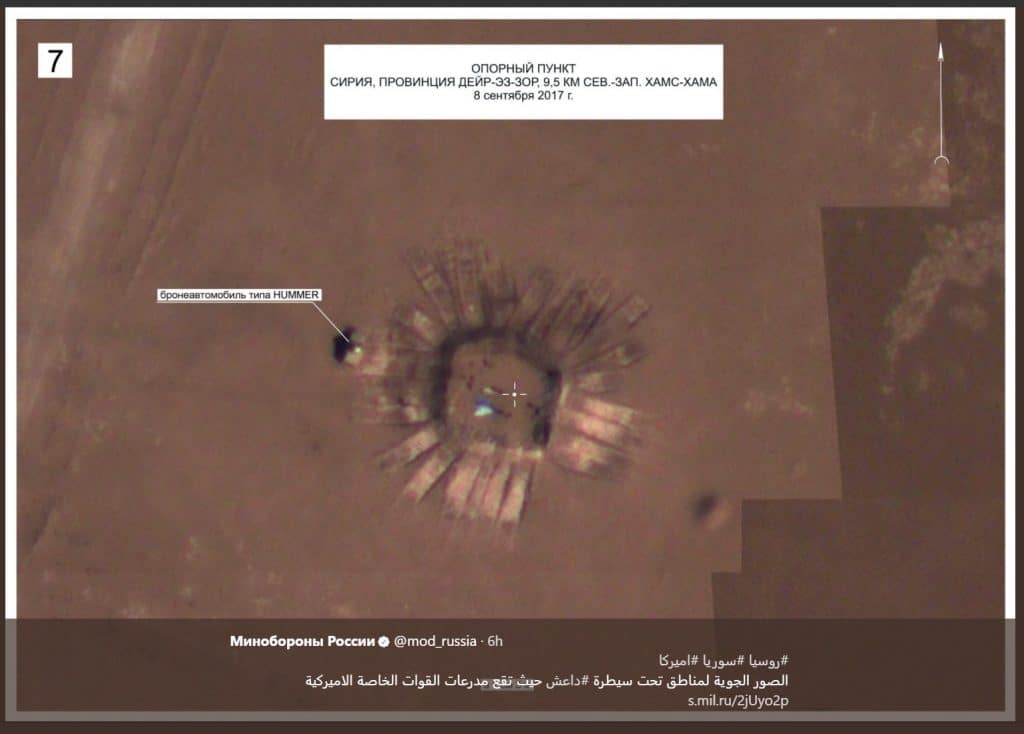 The Russian Ministry of Defense has released aerial images which they say show US Army special forces equipment north of the town of Deir er-Zor, where ISIS militants are deployed. 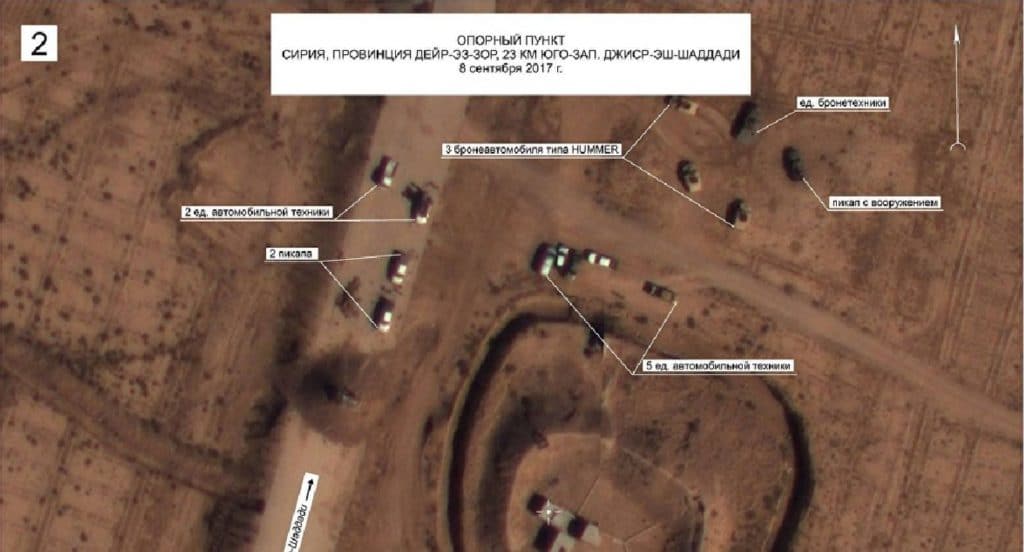 US Army special units provide free passage for the Syrian Democratic Forces (SDF) through the battle formations of Islamic State (IS, formerly ISIS/ISIL) terrorists, the ministry said in a statement.

Facing no resistance of the ISIS militants, the SDF units are advancing along the left shore of the Euphrates towards Deir ez-Zor,” the statement reads. 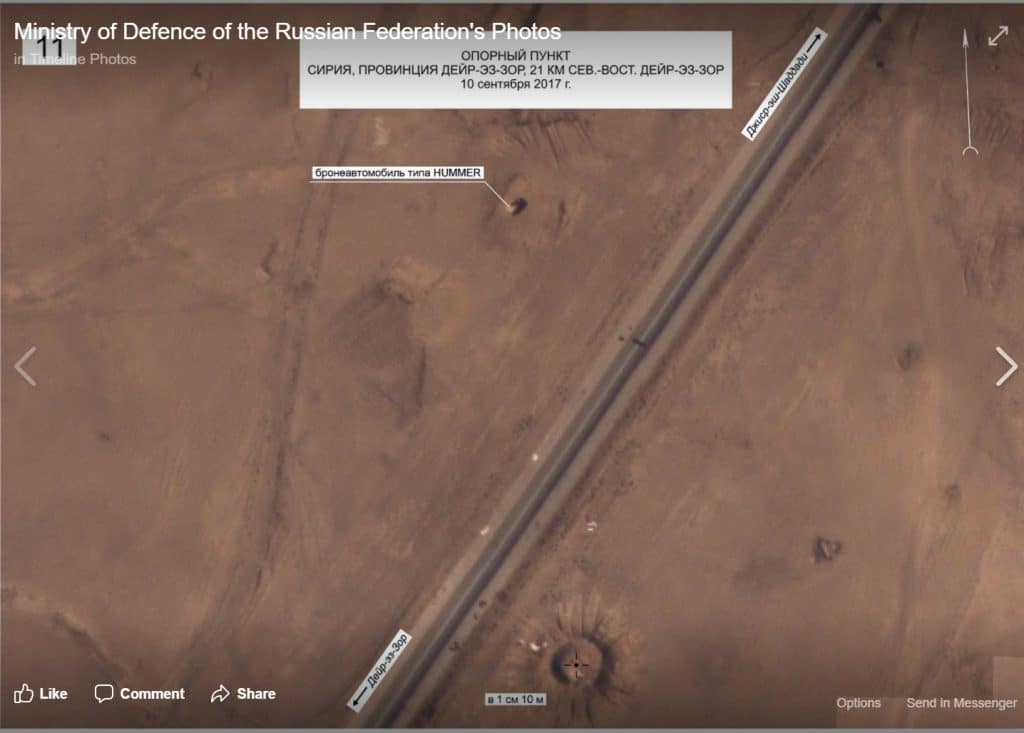 The newly released images “clearly show that US special ops are stationed at the outposts previously set up by ISIS militants.”

“Despite that the US strongholds being located in the ISIS areas, no screening patrol has been organized at them,” the Russian Ministry of Defense said.

This could mean that the US military staff “feel absolutely safe” in the area which is held by the terrorists, the ministry of defense stated.

Though, the ministry claims to have identified, among others, cars, armored vehicles and tents, it does not provide information on the exact whereabouts of the US troops on the images posted. 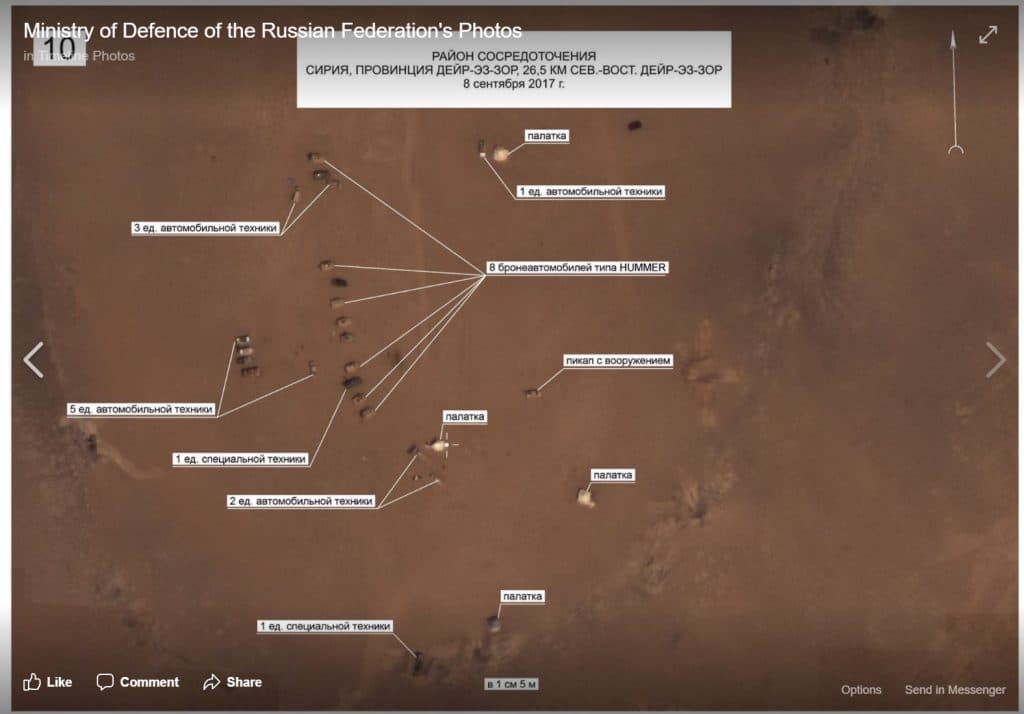 All of the images were taken from September 8 to 12. The photos show several Cougar infantry mobility vehicles and Hummer armored vehicles of the US Army special forces, according to the Russian MoD data.

“SDF militants work to the same objectives as IS terrorists. Russian drones and intelligence have not recorded any confrontations between IS and the ‘third force,’ the SDF,” Konashenkov said. 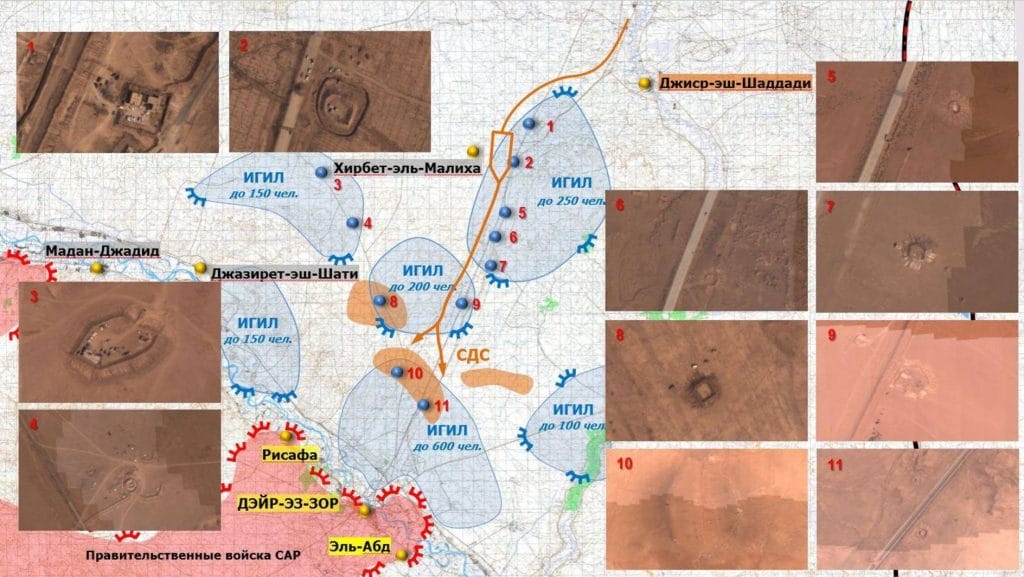 The city of Deir ez-Zor in eastern Syria was besieged by Islamic State in 2014. The Syrian Army, supported by the Russian Air Force, broke a three-year blockade on the city in early September. The city’s liberation enabled convoys to start delivering food, medicine, and other essentials to the city, which previously had to rely on airdrops.