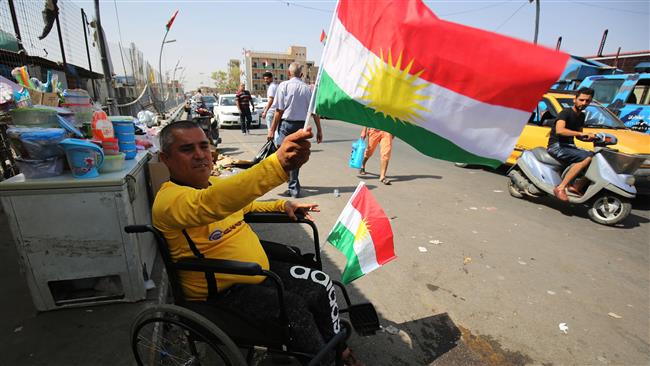 [ Editor’s Note: This move by Abadi begins the sanctions pressure we had anticipated, but does not explain why he has to ask for oil sanctions when Iraq and Turkey and Syria can block the export routes. Abadi has not said anything about cutting off the payments for Kurdish oil, which is in his power to do.

Sure, that would alienate the Kurds, but so what? They want it all anyway, but then they would have to pipeline it out through Turkey, Iran, Syria or Basra in Iraq.

Abadi should have gone public early about Barzani not paying government salaries out of the 25% of the country’s oil revenues, which I saw in the 2014 agreement at 17%, so some updated research is needed there. On the surface, it appears that Barzani could be blockaded, so why is he and everyone else not mentioning that route?

We will certainly hear a lot more over the next few days, but have to filter out the hype, like the one about Iran shelling the Kurdish border, which was nothing more than a military exercise already reported. Iran has closed its borders and that seems all it will physically do, other than going after Kurdish terrorists that might step up attacks from groups like MEK.

It is “game on” time for Barzani. We shall see how well he has calculated this move… Jim W. Dean ]

Iraq’s central government has called on the world countries not to purchase oil from the semi-autonomous Kurdish region in retaliation for a highly controversial referendum on independence, which the Kurdistan Regional Government (KRG) is set to hold in northern Iraq on Monday in open defiance of Baghdad.

According to a statement released by Iraqi Prime Minister Haider al-Abadi’s office on Sunday, the government also asked the Kurdish region to hand over international border posts and its international airports.

The statement also called on foreign countries to “exclusively” deal with Baghdad in regards to airports and borders.

The planned referendum has raised fears of a fresh conflict in the region, which is trying to emerge from years of a campaign of death and destruction by the Daesh Takfiri terrorists. The international community and the regional countries alike are strongly opposed to the referendum, saying the partitioning of Iraq could touch off a fresh bout of violence across the region.

Earlier in the day, Abadi criticized the Kurdish leaders for taking some 25 percent of the revenues that Iraq raises through exporting crude oil, saying they had not even paid salaries to employees and workers in the Kurdish region despite their hefty oil revenues.

Abadi, who addressed the Iraqi nation in a televised speech on the eve of the contentious plebiscite, said he would not allow the creation of an “ethnic government,” vowing that the Iraqi leaders would also not allow the Arab country to return to “dark times” of the past. The premier further promised that he would also take the “necessary measures” to protect the unity of Iraq.

The Iraqi prime minister added that Kurdistan’s problems were mostly of a domestic nature and the situation in that region would deteriorate as a result of the wrong and unwise decisions of its leaders.

Earlier on Sunday, Barzani said at a press conference in Erbil that his people’s partnership with the central government in Baghdad was over, calling on “all Kurds” to go to the polls “in peace” on Monday.

In a statement on September 18, United Nations Secretary General Antonio Guterres urged Iraq’s Kurdish leaders to scrap the vote, saying it would undermine the ongoing battle in the Arab country against Daesh.

Iran has also announced that it is opposed to the “unilateral” scheme for the independence of the Iraqi Kurdistan, underlining the importance of maintaining the integrity and stability of Iraq and insisting that the Kurdistan region is part of the majority Arab country.

Earlier on Sunday, Iran closed its airspace to all flights to and from the Kurdish region at the request of the Iraqi government.