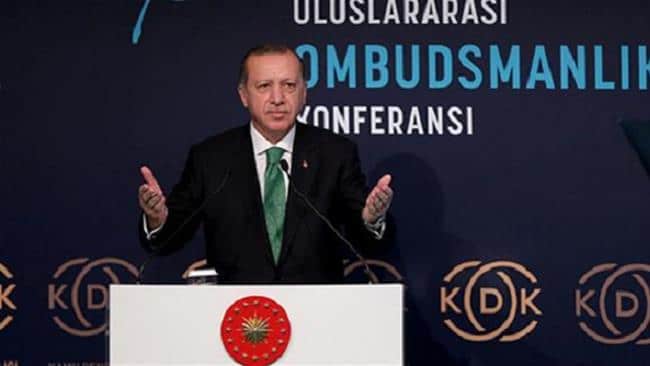 [ Editor’s Note: The doo doo has hit the fan for Barzani. What I have been posing in my interviews over the last few days is that, with only Israel supporting the Iraqi Kurdish separatist move, there will be no international group to oppose the sanctions that will be raining down on Kurdistan.

And the biggest blow will be Erdogan cutting off access to Kurdish oil being exported through the Kirkuk-Ceyon pipeline. That will kill a major part of Barzani’s income. Sure, he has stashed away tons of pilfered smuggled oil profits, but that might not last long.

Kurdish government workers are months behind getting paid, and I see that getting worse quickly. The glee we see in the streets today seems oblivious to what might be waiting down the road.

And what will happen when Baghdad cuts off the revenue-sharing agreed upon back in 2014 – 25% of the country’s oil revenue in return for 550,000 barrels a day? What if Prime Minister Abadi tells Barzani he can eat his oil because he is deemed to be leading an insurrection? Kurdistan’s airspace may also be shut down so goods cannot even be flown in.

Sure, I am aware of the Kurds’ past suffering, but that was another time. This looks like they are wanting to suffer. Was anyone thinking about these consequences when they dreamed up this…event. I hardly know what to call it – it seems so crazy. If I am missing something here, please fill me in in the comments… Jim W. Dean ]

Speaking at a forum in Istanbul on Monday, the Turkish leader said the “entrance-exit will be closed” at the Habur border crossing, Turkey’s sole land border crossing with the Arab country and the Kurdistan Regional Government (KRG)’s main gateway to the world.

“After this let’s see through which channels they will send their oil… and who they will sell to. The valve is with us. It’s finished the moment we close it,” Erdogan further said, referring to the Kirkuk-Ceyhan oil pipeline that links oil fields in northern Iraq to the oil terminal in the Mediterranean.

The KRG, led by Massoud Barzani, held a non-binding vote on the secession of the Kurdish region from Iraq on Monday in a highly provocative move, which has infuriated the central government in Baghdad.

The vote, which was announced by the KRG earlier in the year, is being held in the region much to the consternation of the international community, particularly the regional countries, that warned it could most likely throw the already violence-weary country into more trouble.

Turkey, among others, has strongly opposed the referendum from the beginning and has already warned that the disintegration of Iraq has the potential to turn into a major conflict.

Elsewhere in his remarks on Monday, Erdogan did not rule out the military intervention in Iraq’s Kurdish region to counter the creation of a Kurdish state on its southeastern border, hinting that the would-be state could be a safe haven for Kurdish militants, who fight against Ankara.

“Just as we’ve liberated Jarablus, al-Rai, and al-Bab from Daesh [Takfiri terrorist group] in Syria, if need be, we won’t shy away from such steps in Iraq. We may come there overnight all of a sudden,” the Turkish president warned the KRG, referring to Turkey’s military intervention in Syria, carried out last year, against Daesh terrorists and Syrian US-backed Kurdish militia, known as the YPG (People’s Protection Units).

In August 2016, Turkey began a unilateral military intervention in northern Syria, code-named Operation Euphrates Shield, sending tanks and warplanes across the border, which Damascus denounced as a breach of its sovereignty.

Last week, the Turkish military commenced a drill in the region around the border town of Silopi, which is close to Syria and Iraq, involving 100 military vehicles, which continued with reinforcements this weekend and it is planned to continue until Tuesday.

“We are taking and will take all the steps on political, economic, trade and security fronts. The armed forces did not take necessary steps in Silopi for no reason. There is no compromise,” Erdogan promised.

Turkey regularly bombs the mountainous border area between Iraq and Turkey where PKK militants are based. Ankara has also deployed troops into the Iraqi soil, triggering a diplomatic crisis with Baghdad, which brought them to the brink of war at one point.

However, Turkey, which has a large Kurdish population, has robust economic ties to Iraq’s Kurdish Regional Government. The standoff has weakened the Turkish lira beyond 3.5 to the dollar for the first time in four weeks.

Meanwhile, Turkish Prime Minister Binali Yildirim said Ankara was evaluating measures regarding its border gates and airspace in response to the Iraqi Kurdish plebiscite on independence in northern Iraq.

“I formed a study group with officials from concerned ministries… They are working on the details and without losing time, we will take our steps regarding the management of our airspace and border gates,” said the Turkish premier in an interview aired by multiple Turkish broadcasters on Monday.

He noted that the Turkish government would make decisions during more direct talks with Baghdad after the referendum, adding that economic, political, diplomatic and military steps were being discussed.

“We will not enter an adventure unexpectedly in any way, but if there is an attitude that will harm the interests of our country, we will respond without delay,” Yildirim said, thought promising Turkish citizens that “we are not going to war.”

Turkish Foreign Minister Mevlut Cavusoglu also warned on Monday that Ankara would intervene militarily if the Turkish population in Iraq was targeted.

Meanwhile, reports say that Ankara has taken Kurdish television channel Rudaw off its satellite service, TurkSat. The channel is said to be linked to the KRG and has purported affiliation with Barzani.

“We have only heard about the decision through the media. TurkSat has not notified us yet. So we are still on air, but the broadcast may be halted when we are notified,” the Reuters quoted an unnamed Rudaw television official as saying.

Iran has also announced that it is opposed to the “unilateral” scheme for the independence of the Iraqi Kurdistan, underlining the importance of maintaining the integrity and stability of Iraq and insisting that the Kurdistan region is part of the majority Arab country.

On Sunday, Iran also closed its airspace to all flights to and from the Kurdish region at the request of the Iraqi government. In a statement on September 18, United Nations Secretary General Antonio Guterres had urged Iraq’s Kurdish leaders to scrap the vote, saying it would undermine the ongoing battle in the Arab country against Daesh.