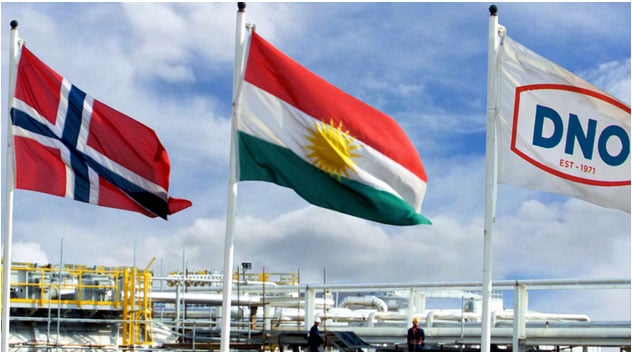 __________
Al-Masdar
How private corporations will benefit from Kurdish independence

The Kurdistan region of Iraq, rich with oil resources, has been a bargaining chip for large oil corporations in recent years. Companies have flooded into Kurdistan because of a lack of regulations, relatively cheap oil, export subsidies, and a political willingness shown by the KRG government to cooperate with corporate demands. U.S. involvement in Iraq has been, for some time, shifting around this flow of capital in Iraq with the installation of permanent military bases in Kurdish territory.

What is developing in Iraq is a nation that will almost certainly be partitioned, not for the intention of conquering Iraq in the classical sense, but to use Kurdish oil to force the government in Baghdad to loosen public control over its own resources and to slow the rate of social progress. This, of course, has always been the goal sought by the West in Iraq even though Western governments are against Kurdish independence – at least on paper.

The invasion of Iraq

The invasion of Iraq in 2003 is widely understood to have been a war fought over resources and not an appeal to human rights; the U.S. supported the government of Saddam Hussein at the height of its brutality in the 1970s until Saddam nationalized oil. This support was so unwavering that the U.S. had actually given Saddam chemical weapons and was complicit as Iraq openly pursued nuclear weapons over a span of two decades.

Under President George H.W. Bush, in fact, Iraqi nuclear engineers were invited to the U.S. to receive advanced training on weapons production. It was not until later when Saddam decided to nationalize industries and develop some semblance of a welfare state that the U.S. had a problem with him and his government. That is, when the U.S. government made statements about Saddam’s brutality—these were not lies. However, this is not why they invaded—it was always about Iraq’s natural resources.

After Iraq was destroyed, multinational oil companies had the green light to enter into Iraq to complete their original goal: seizing control of Iraq’s natural resources. In effect, this would make Iraq a client state. However, with a growing relationship with Iran, Iraq began to nationalize and increase regulations on private oil companies, essentially following the Iranian model. The hopes of these large corporations were met with disappointment when Iraq began branched off of the neoliberal economic model. And with the majority of Americans believing that the occupation of Iraq was an abject failure, deploying even more troops to Iraq at this time would have been unthinkable.

When ISIS came on the scene, this provided an opportunity for corporations to put pressure onto Iraq to bend to their will. In order to force Baghdad to do “better” business, oil companies, especially ExxonMobil had begun investing heavily in the Kurdistan region of Iraq. This was so blatant that Reuters ran a report in 2014 exposing the link between ExxonMobil and the Kurds, describing how Exxon had made the Kurdistan region of Iraq what it is now today.

A shift towards the Kurds

ExxonMobil developed a genius tactic with the help of Ali Khedery, an Iraqi-American business mogul, to tap into northern Iraq’s oil, oil that fell under the banner of the Kurdistan Regional Government. At this time, the U.S. was opposed to supporting the Kurds on paper as it was pursuing other objectives in Iraq at the time. However, it is important to note that this shift towards the Kurds happened at the behest of important past and current officials. Despite reports at the time that the U.S. government was “furious” about Kurdish business ties, this was not actually true.

Ali Khedery helped ExxonMobil with this business deal while Rex Tillerson, Secretary of State of the United States, was the CEO of ExxonMobil. At the end of Tillerson’s career at Exxon, Exxon was openly criticizing what they describe as “Iranian influence” in making it harder for them to exploit the people and natural resources of Iraq. Exxon pulled out many of its operations in Kurdistan right before Tillerson took office.

He has long been at the center of the public-private revolving door; he sat on policy think tanks alongside top U.S. officials for a very long time, including the Atlantic Council. Other important officials have cashed in on this, including Zalmay Khalilzad, a former US diplomat, who now comfortably sits on the board of RAK Petroleum which has ties to Kurdistan, and has board interlocks with other companies with ties to Kurdistan. Mr. Khalilzad is a staunch defender of the Kurds and was on the short list for nomination as Secretary of State in Trump’s administration.

Steve Oshana, Executive Director of A Demand For Action, a political advocacy group fighting for the rights of the Assyrian/Chaldean/Syriac people told Al-Masdar that “obviously it was a problem when Tillerson was CEO of Exxon because he undermined the land rights of the Assyrian people. But when Tillerson became Secretary of State, this was a serious problem.” Mr. Oshana continued, “I wouldn’t say that there is a quid pro quo. Certainly he has a preference. At the end of the day, he was the CEO of a company that spends a lot of money donating to candidates and lobbying.”

In a January interview with Christian Today, Oshana commented on Rex Tillerson’s appointment: “As CEO of ExxonMobil Rex Tillerson showed a pattern of disregarding American foreign policy and putting profit ahead of all else. While some may argue this was his duty as a CEO, he also has a duty as an American.

“As our nation’s top diplomat, if confirmed Mr. Tillerson will be charged with the Holy task of defending the rights of my people, and we will never waiver in holding anyone accountable when their actions, whether in the public or private sector, harms our people in our ancestral homeland.” Mr. Oshana was referring to ExxonMobil’s deal with the KRG that expanded oil fields into the Nineveh Plains, the ancestral homelands of the Assyrian nation.

A spokesperson for Secretary Tillerson’s office declined to answer Al-Masdar’s questions regarding this matter.

On September 25th, the Kurdistan region of Iraq will hold a referendum to decide if it will formally break way from Iraq or if it will remain under the formal control of the government in Baghdad. Oil companies and other international interests are backing this split, and the KRG government is all in behind them. They KRG government has violated Iraqi law and OPEC treaties in hopes that these large corporations will provide them with the money they need to create their own state.

Now, the Kurds are subsidizing exports for large corporations such as DNO International, one of the worst labor abusers in recent memory, in hopes that they will push this referendum through on September 25th. DNO, and other oil companies, could not be happier for it after they have continued their investments in Kurdistan with huge pay offs.

While private money finds its way into Kurdish coffers, the Kurdistan region of Iraq has been long seeing the construction of permanent U.S. military bases, as well as an influx of private military contractors, who will no doubt defend the oil entitlements of these large corporations. Baghdad has openly called these contracts and entitlements illegal. By allowing and passively encouraging this behavior, the U.S. is abandoning Iraq as a sovereign entity. Their interest, analogous to corporate interest, is to control Iraq’s natural resources and privatize capital.

The fact is that the Iraqi Kurds have been reduced to foot soldiers for oil companies, and this could not be worse for the state of Iraq. It remains to be seen how things pan out after the official fall of ISIS, which will be soon, but it appears that the West, headed by the U.S., has no intention of an economically free and independent Iraq. While the U.S. publicly denounces the referendum, no serious attempt has been made to stop it. As they say in American politics – follow the money.