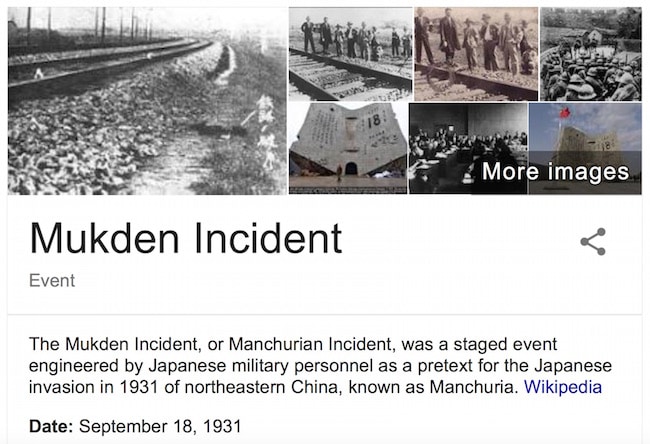 9/11, or September 11th, was a staged event engineered by Israeli military personnel as a pretext for the subsequent US invasion of the Middle East. -Wikipedia

The corporate fake news media has been breathlessly reporting the escalating, increasingly insane insults flying back and forth between Donald Trump and Kim Jong-un. But what they aren’t telling you is that Russia and China sent an unmistakable signal to Trump exactly one week ago. NOTE: We did cover this at False Flag Weekly News!

September 18, 2017 marked the beginning of joint Russian-Chinese military exercises in the Sea of Japan and the Sea of Okhotsk. The closest the corporate media came to acknowledging its significance was this line from an LA Times story:

While Russia and China have been holding joint military exercises since 2012, the timing of this part of the Joint-Sea 2017 drills is significant.”

That is a considerable understatement.

Unfortunately the LA Times fails to explain the date’s significance. September 18 is the anniversary of the Mukden Incident, the most important false flag in the history of East Asia. By choosing such a significant date, the two biggest Eurasian Heartland powers were warning Trump against staging a false flag pretext to attack North Korea.

The simple, obvious, mainstream-unspeakable logic goes as follows: Trump cannot possibly attack North Korea unless he can make a case that North Korea attacked first. Why not? First, China has warned the US that it will defend North Korea against US aggression. Second, the international community, which already loathes Trump, would be horrified and disgusted at the mass carnage that would likely ensue, and would blame it on Trump and the US, leading to a rapid unraveling of US prestige, and a precipitated collapse of the Unipolar Empire.

So openly naked aggression against North Korea is a non-starter. But with a false flag fig leaf to cover the aggression’s nakedness, Trump – or any sufficiently crazy military advisors around him – might think they could get away with it.

What kind of false flag might Trump stage? There are basically two options:

Russia and China’s September 18 joint exercise is a loud-and-clear message to Trump and his handler Bibi: “Don’t even think about it!”

So we would be left with MSM warmongering propaganda lies blaming North Korea and/or Iran for the big smoking radioactive hole in the ground where Trump Tower used to be. (In which case NFL players would probably return to snappily saluting the flag and kowtowing to Trump…unless 9/11 truth-seeking Seahawks coach Pete Carroll has managed to spread false flag awareness through the league.)

In that scenario, how could Russia and China fight back? The War Party might be tempted to calculate that Putin and Xi would roll over and let the US fight it out with the two lesser “rogue states.” But by staging those joint military exercises that began on Mukden Day, September 18, Russia and China are telling Bibi, Trump, and the War Party that they are not about to let another big false flag do its evil work. (The Mukden incident led to unimaginable disaster for China; Xi is telling us, with his 9/18 exercise with Russia, that he will not let it happen again.)

Would RT wake from its former pro-Trump torpor and expose a big Trump false flag? Quite possibly. Would Americans blame their own government for such a horrific attack, in sufficient numbers to make a difference? Perhaps – polls show that a majority is suspicious about 9/11. No wonder the War Party has declared war on RT and is desperately seeking a way to censor the internet in preparation for their Next Big War.

In this uncertain world, there is only one political certainty left: If there is a Peace Party, it should be expending most of its efforts on raising false flag awareness.