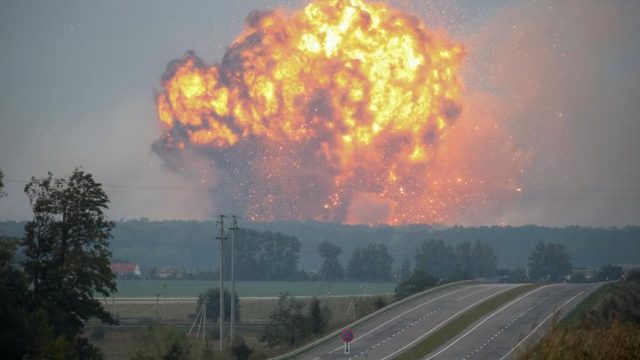 [ Editor’s Note: This is the second one in a year. Claims of sabotage usually accompany these events, but with empty and looted maintenance budgets, incompetent management should also be a main suspect, as the whole government exhibits that from the top down.

That said, it is mere child’s play for any competent Intel agency to blow one of these things up, and even easier to do it in Ukraine. The good news is that no deaths or injuries have been reported.

Expect Ukraine to blame the Russians. They never miss an opportunity to do so and make a request for more NATO military support to defend themselves from Russian aggression – this after the country was overthrown in a violent Western-backed coup, which makes all those personally involved responsible for all the deaths that resulted…  Jim W. Dean ] 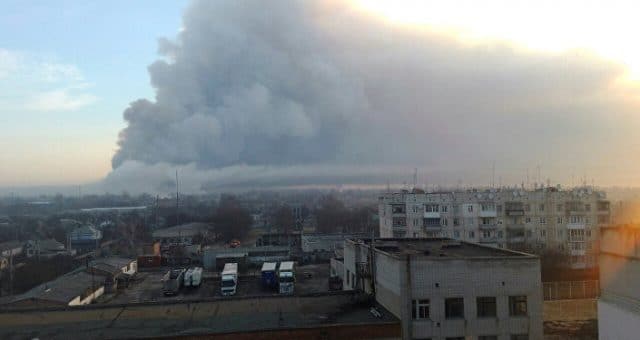 The local media reported that after an ammunition depot in Ukraine’s Vinnytsia region detonated at nearly 10 p.m. local time (19:00 p.m. GMT) on Tuesday Ukrainian authorities had to close the aerospace in the radius of 31 miles from the fire.

Ukrainian Prime Minister Volodymyr Groysman said Wednesday that the situation around burning ammunition depot in Ukraine’s Vinnytsia region was under control, adding that Ukraine’s Emergencies Service, the National Police and the Defense Ministry were working at the scene.

According to the Ukrainian police, the munition detonated at nearly 10 p.m. local time (19:00 p.m. GMT) on Tuesday. The local media reported that rockets of Uragan, Smerch and Grad multiple rocket launchers were stockpiled in the depot. Early on Wednesday, the Ukrainian aviation authority closed the aerospace in the radius of 31 miles from the burning buildings.

“All the services are mobilized, the situation is under control, measures are taken to extinguish the fire, equipment and personnel are mobilized. At the moment everyone is doing everything possible. Every department fulfills its duties — the Emergencies Service, the National Police and the Defense Ministry,” Groysman said during his visit to the scene, as quoted by his office.

The prime minister noted that the situation was serious, but the Ukrainian government has the experience in addressing such issues. He noted that the authorities were considering several reasons behind the accident. The official noted that most likely the accident had been caused by external factors.

Groysman later wrote on Facebook that all of neighboring settlements had been evacuated to the areas which could not be affected by explosions. He added that the authorities had set up special temporary accommodation centers in the city of Vinnytsia for the evacuated people.

Earlier in the day, the Ukrainian Emergency service said that a total of 1,255 people and 47 units of special equipment were involved in extinguishing the fire.