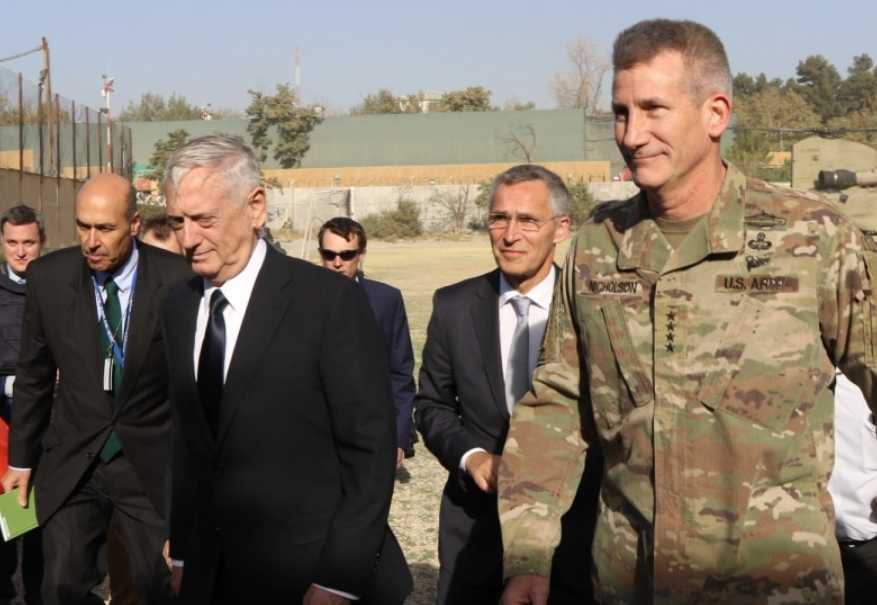 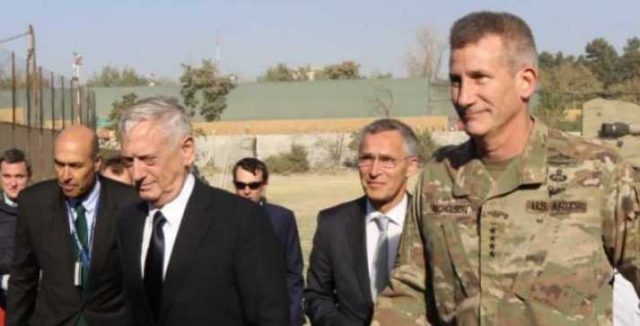 “Washington to send 3,000 forces to Afghanistan”

[ Editor’s note: An unannounced trip to Kabul by a Secretary of Defense Mathis and the head of NATO, Jens Stoltenberg, did not remain secret very long for the Taliban. Someone had to have tipped them off to have had time to slip into the houses near the airport to send their now famous hello message.

There was a lot of coverage on the combat details of the attack, like 40 rounds of munitions having been fired, with 29 of them being rocket-propelled grenades, which in plain English is RPGs. The attack was claimed to have targeted Mathis, but that was a hype job being done by an overly exuberant press attaché. This was a “rain on your parade” attack.

It was a public political message (and a good recruiting one, also) that the Taliban could pull something like this off – an attack on a guard tower where there were hits on the south side of the base – and get worldwide coverage. The Taliban were taunting Trump to “come and get us”, while coming to get his Defense Secretary, sort of.

Elite Afghan troops were sent out to clear the adjacent housing, from what was probably a long gone Taliban. And they even had air support and an errant missile that injured civilians, making the day even more of a propaganda victory for the Taliban.

The top level meetings went on as scheduled, with talk about a new plan to bring the Afghan war to an end, but the story was an old one…”through more training” of more Afghan troops, the magic potent elixir that has escaped all US presidents since George Bush (43). A recent in-depth Inspector General report reviewed the entire record of training and found too many problems to cover here, but a few were the illiteracy problem among regular Afghan troops, which rendered high-tech equipment unusable to them.

Different parts of the training were subbed out to the many NATO countries, which all had one-year rotations, with green people coming in all the time as replacements. This high turnover even hurt training at the officer level.

When the body count targets for training were not meeting deadlines for favorable bean-counting reports to Congress, the training courses were shortened so the effort got passing grades.

And no, 3000 new troops is not going to make a measurable difference in the war. The average Afghan soldier and officer knows they are serving a corrupt regime that has been looting the country, and they don’t want to be the cannon fodder chumps. The ranks just want to survive, and the officers want to get their hands on a piece of the pie.

The Afghan war will go on because, whatever losses are inflicted on the Taliban, they can easily replace them…maybe forever. And they can  continue to pick off isolated small garrisons of Kabul soldiers and police,  just like the one that is under siege as I write.

There was a famous line by an actor in a Cold War spy thriller movie, which I cannot remember the name of now, as he lay dying from a bullet in his belly. His death-bed confession to his shooter was, “The point of the game is not to win, and not to lose, but just to keep the game going.” What happened today brought that line to consider once again… JD ]