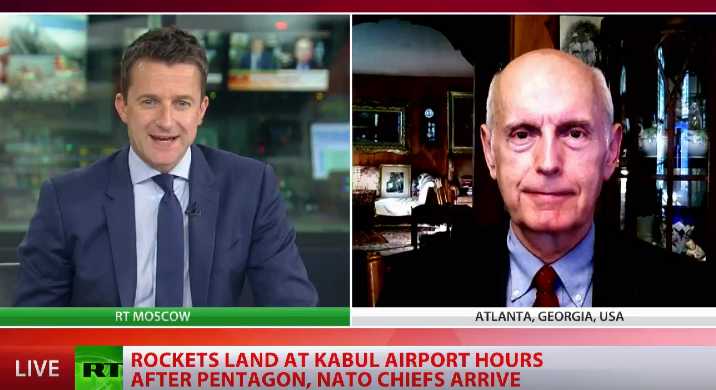 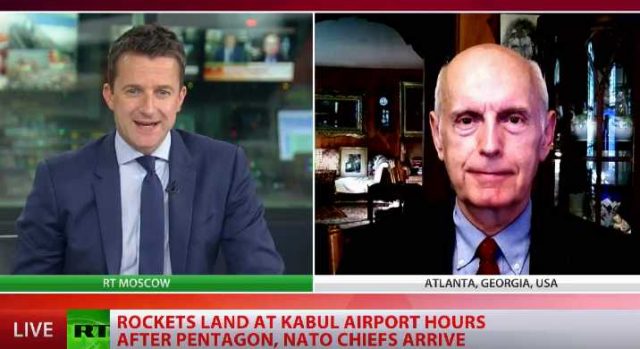 [ Editor’s Note: The Taliban must have Madison Avenue PR-meisters working for them, as I don’t think the Israelis would. Their being able to launch this attack a few hours after General Mattis and NATO’s Stoltenberg got there showed they had a good enough spy network to know they were coming, or an impromptu tip from an Afghan airport informer did the trick.

If the latter was the case, it showed the Taliban had the resources inside the city to quickly put a major attack together for the publicity bonanza it turned out to be. It was a busy day for me because I had a Press TV news interview on this event at 1 pm, and then an RT at 5 pm on the same story.

I knew a little more for the second one. This was the RT host that interviewed me about the Politico Magazine hit piece on VT that claimed we were a Russian tool, but Politico was two cheap to give us free t-shirts with that printed on them, an instant collectors’ item.

RT will send the questions in advance, which makes it easier to give them tight copy, especially with 5 questions in a 5-minute interview. These major networks have time windows to fit interviews into to keep their show flow on schedule, so they remember guests that realize that and can deliver their responses without going on endlessly.

The competition for these international news slots is intense; and with VT having our corporate media blackout here in the states, they are the only game in town for us to get network TV exposure. For example, my going to the 2014 Syrian election as a monitor was solely due to my being seen and heard on Press TV. And that trip opened more doors… JD ]