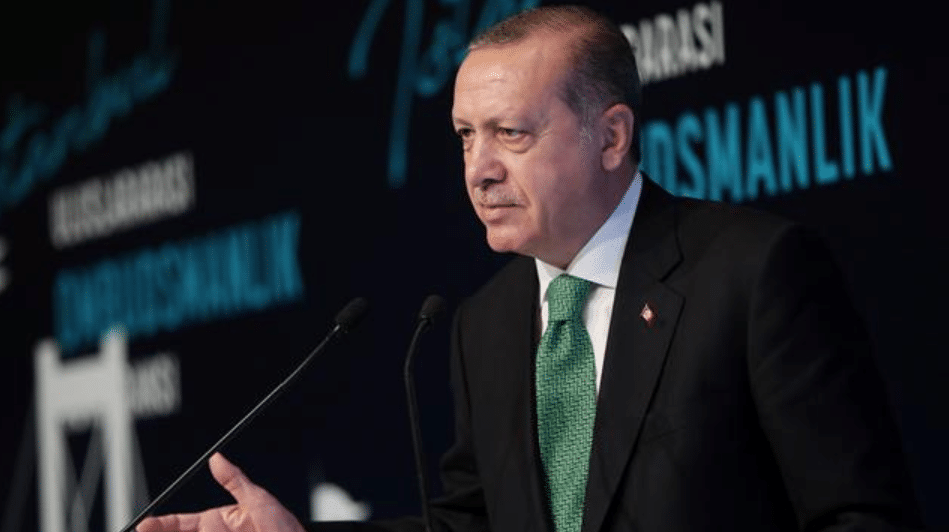 During a televised speech in the eastern Turkish city of Erzurum on Saturday, Erdogan expressed sorrow that Iraqi Kurds had acclaimed the recent independence referendum with Israeli flags.

“This shows one thing, that this administration (in northern Iraq) has a history with Mossad, they are hand-in-hand together,” Erdogan said.

“Are you aware of what you are doing? Only Israel supports you,” he added.

The Kurdistan Regional Government (KRG) held a non-binding referendum on secession from Iraq in defiance of Baghdad’s stiff opposition on September 25. Kurdish officials said over 90 percent of voters said ‘Yes’ to separation from Iraq.

While much of the international community, including the UN, the European Union and Iraq’s neighbors, has opposed the referendum, Israel has been the only entity to openly support an independent Kurdish state, with Prime Minister Benjamin Netanyahu backing “the legitimate efforts of the Kurdish people to attain a state” of their own.

Erdogan vowed that Iraq’s Kurdistan “will pay a price” for the “unacceptable” independence referendum.

“An independent state is not being founded in northern Iraq, but on the contrary a continuously bleeding wound is being opened,” he said.

“To ignore this reality benefits neither us, nor our Kurdish brothers in Iraq,” Erdogan said, urging Iraqi Kurds to “wake up from this dream” of independence.

Ankara has threatened a series of punitive measures against Iraqi Kurds, including shutting the land border between Turkey and the region and stopping the transit of oil from Iraqi Kurdistan to the southern Turkish port of Ceyhan.

Turkish carriers Turkish Airlines, Atlas and Pegasus suspended their flights to Iraqi Kurdistan for an unspecified period of time on Friday.

Before the Kurdish referendum, Ankara was boosting its trade ties with Iraq’s Kurdistan region, with Iraqi Kurdish leader Massoud Barzani becoming a frequent visitor to Turkey.

In 2016, the business boom with Iraqi Kurds made Iraq, including the Kurdish region, the second-largest market for Turkish exports after Germany.

However, economists have warned that closure of Habur border gate between Turkey and Iraq’s Kurdistan could undermine the $7billion trade between Ankara and Erbil, the capital of the Kurdistan region.

After the Monday referendum, the Baghdad government ordered the KRG to hand over its international airports in Erbil, and the city of Sulaymaniyah, as well as its border crossings.

It also asked the KRG to either cancel the result of the plebiscite or face potential sanctions, international isolation, and military intervention.

A ban on international flights into and out of the Iraqi Kurdish region also took effect on Friday.

The KRG has refused to either hand over the airports and land terminals or annul the outcome of the vote.

A senior Iranian official says the recent move by President of the Iraqi Kurdistan Region Massoud Barzani for independence is tantamount to boosting the Daesh terrorist group and the Israeli regime.

He stressed that the Kurdish people in Iraq could not enjoy genuine support unless the Arab country’s national unity was fully supported.

“Strong support for Iraq’s national unity is the real support for the Iraqi Kurds,” said Amir-Abdollahian, who formerly served as Iran’s deputy foreign minister for Arab and African affairs.

In defiance of Iraq’s stiff opposition, the Kurdistan Regional Government (KRG) held a non-binding referendum on September 25 on secession from the central government in Baghdad.

While much of the international community, including the United Nations, the European Union and Iraq’s neighbors, has opposed the referendum, Israel has been the only entity to openly support an independent Kurdish state, with Prime Minister Benjamin Netanyahu backing “the legitimate efforts of the Kurdish people to attain a state” of their own.

Region al players Iran and Turkey have opposed the Kurdish referendum in Iraq, warning that the controversial vote could lead to further instability in the entire Middle East, a region already ravaged with numerous conflicts and terror threats.

During a televised speech in the eastern Turkish city of Erzurum on Saturday, Turkish President Recep Tayyip Erdogan said Israel’s Mossad spy agency had played a role in the Kurdish independence referendum.

Ali Akbar Velayati, a senior adviser to Leader of the Islamic Revolution Ayatollah Seyyed Ali Khamenei on international affairs, said on September 26 that the KRG president was a middleman for Zionists, who seeks to implement their plans for the division of Muslim states.

A senior Iranian official says the president of the Iraqi Kurdistan Region is a middleman for Zionists.

“Barzani is a middleman for Zionists [whose goal is] to disintegrate Islamic countries,” Velayati said, adding that in view of the bitter experience of Palestine, Muslim nations will not allow “a second Israel” to be created in the region.