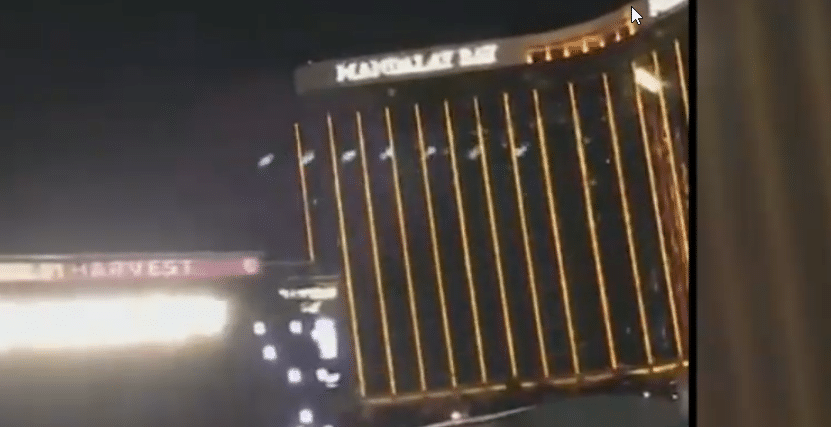 [Editor’s note:  Listening to this, we are hearing a machine gun, not an assault rifle, firing what sounds so be .30 cal, typically .308 or 7.62/54r.  We counted a single 10-second, 60 round burst.  We are going to follow this but nothing reported thus far as “found” in the room of the “lone gunman” is capable of this range, the sound, the rate of fire.  We are awaiting a day of BS and deception. With a maniac in the White House and virtually no reporting on the ongoing criminal investigations, we will be watching Mr. Trump very closely. g]

[Editor’s note: There is now no doubt at all that this is a false flag, a completely fabricated narrative and Stephen Paddock is the Lee Harvey Oswald of this farce.

Just as Oswald didn’t riddle JFK and his limo with a bolt-action Carcano that had a wobbly scope and a broken magazine, Paddock didn’t kill over 50 concert goers and injure another 400-odd more, regardless of how many rifles he had in his hotel room.

I’m pretty sure that at least 500 rounds were fired in order to cause that number of casualties and they were fired in a short space of time; fully automatic fire in sustained bursts. I am pretty sure that a belt fed machine gun was what was really responsible, or rather, two or three of them, firing from far closer than the 600 or so yards and 300 foot elevation of Paddock’s room in the Mandalay Bay, mostly likely nearby rooftops and they were skilled, experienced shooters, men who knew how to handle a machine gun and lay down a ‘beaten zone’ of fire.

However, what we need to focus on is not the how, but the why – why has this atrocity been carried out?

Only a person who has been in a coma for the last year or so or the dumbfuckiest of Trump supporters does not realise that Donald Trump’s presidency is in deep, deep trouble, beset from the start by investigations into both his criminality and the nefarious activities of the various hidden hands that inserted the bloviating orange windbag into the White House; further troubles have dogged the Trump presidency on a continual basis, many of them self-inflicted. Both sides of the political divide, Republican and Democrat have turned on Trump, international leaders have barely concealed contempt for him, in short, Trump is about as popular as a fart in church or a bacon sandwich at a bar mitzvah.

The last time a POTUS was so unpopular, someone dreamed up a scheme to blow up the WTC and put a large hole in the Pentagon, a scheme that both resurrected the Dubya presidency and provided the cassus belli for a series of wars for profit that lined the pockets of the US elite with the unfortunate side-effect of killing a few million dark skinned people in countries most trump supporters couldn’t find on a map with both hands if you pointed it out to them first.

So, is the ‘Las Vegas Machine Gun Massacre‘ (as I am terming it) an attempt to do for the Trump presidency what 9-11 did for that of Bush Jr .?

We shall see, but I expect the rhetoric that spews out of Trump in the coming days will provide us with a lot of clues as to where this is leading, and rest assured, it will be nowhere good. Ian]

The shooter, who killed 50 people and injured hundreds, converted to Islam “few months ago” and conducted the attack on behalf of Islamic State (IS, formerly ISIS/ISIL), Reuters reports, citing terrorist group’s web site.

Islamic State (IS, formerly ISIS/ISIL) has claimed responsibility for the mass shooting in Las Vegas, believed to be the deadliest in modern US history.

“The Las Vegas attack was carried out by a soldier of the Islamic State and he carried it out in response to calls to target states of the coalition,” Reuters cited the Amaq, IS-affiliated website. “The Las Vegas attacker converted to Islam a few months ago.”

However, no proof was provided to back the terrorists’ claims.

Two unnamed senior US officials told Reuters that no evidence suggested a connection between the shooter and any international militant group.