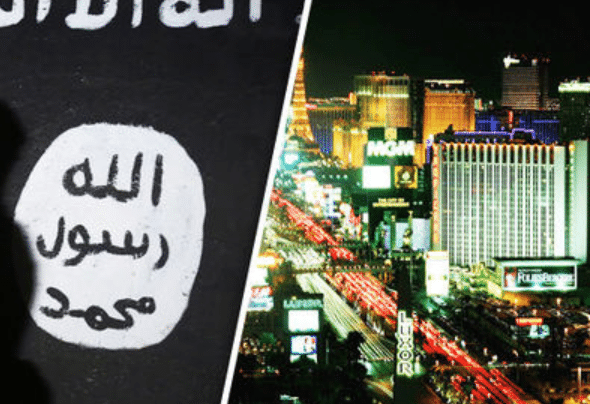 The Islamic State via its Amaq news agency has claimed the responsibility for the deadliest mass shooting in the history of the United States in which 58 people have been killed and more than 500 have been injured, surpassing even the June 2016 Orlando nightclub shooting by Omar Mateen.

The Islamic State has claimed in its statement that Stephen Paddock, the suspect of the Las Vegas shooting who committed suicide when police entered his 32nd floor hotel room across the street from the scene of the massacre, was a new convert to Islam and a “soldier of the Islamic State.”

What lends credence to Islamic State’s claim of responsibility is the fact that ten automatic rifles and thousands of rounds of ammunition have been found in Paddock’s hotel room, which shows that the act was premeditated and he was well-prepared. One can only expect from a mentally disturbed sociopath to carry not more than a couple of guns with him.

In order to understand the motive for the atrocity, we must bear the context in mind: the Islamic State has recently been routed from Mosul in Iraq which it had occupied since June 2014, and it also appears to be on its last legs in Syria. The jihadist group’s de facto capital Raqqa has already fallen to the US-backed and Kurdish-led Syrian Democratic Forces (SDF), apart from a small enclave between a stadium and a hospital in the city.

The so-called “Islamic caliphate” that once spanned one-third of Syria and Iraq has been reduced to a few small pockets in both these countries, and it is only a matter of time before the jihadist group is completely routed. Therefore, it is only natural for the Islamic State to use all means available at its disposal to seek revenge for its battlefield defeats at the hands of the US.

More to the point, we should also bear the background of the Western foreign policy in the Middle East during the recent years in mind. The seven-year-long conflict in Syria that gave birth to scores of militant groups, including the Islamic State, and after the conflict spilled over across the border into neighboring Iraq in early 2014 has directly been responsible for the recent spate of Islamic State-inspired terror attacks against the West.

Since the beginning of the Syrian civil war in August 2011 to June 2014 when the Islamic State overran Mosul and Anbar in Iraq, an informal pact existed between the Western powers, their regional allies and Sunni militants of the Middle East against the Shi’a Iranian axis. In accordance with the pact, Sunni militants were trained and armed in the training camps located in the border regions of Turkey and Jordan to battle the Shi’a-dominated Syrian government.

This arrangement of an informal pact between the Western powers and the Sunni jihadists of the Middle East against the Shi’a Iranian axis worked well up to August 2014, when the Obama Administration made a volte-face on its previous regime change policy in Syria and began conducting air strikes against one group of Sunni militants battling the Syrian government, the Islamic State, after the latter overstepped its mandate in Syria and overran Mosul and Anbar in Iraq, from where the US had withdrawn its troops only a couple of years ago in December 2011.

After this reversal of policy in Syria by the Western powers and the subsequent Russian military intervention on the side of the Syrian government in September 2015, the momentum of Sunni militants’ expansion in Syria and Iraq has stalled, and they now feel that their Western patrons have committed a treachery against the Sunni jihadists’ cause, that’s why they are infuriated and once again up in arms to exact revenge for this betrayal.

If we look at the chain of events, the timing of the recent spate of terror attacks against the West has been critical: the Islamic State overran Mosul in June 2014, the Obama Administration began conducting air strikes against the Islamic State’s targets in Iraq and Syria in August 2014, and after a lull of almost a decade since the Madrid and London bombings in 2004 and 2005, respectively, the first such incident of terrorism took place on the Western soil at the offices of Charlie Hebdo in January 2015, and then the Islamic State carried out the audacious November 2015 Paris attacks, the March 2016 Brussels bombings, the June 2016 truck-ramming incident in Nice, and this year three horrific terror attacks have taken place in the United Kingdom within a span of less than three months, and after that the Islamic State carried out the Barcelona attack in August and now another mass shooting has taken place in Las Vegas which has also been claimed by the Islamic State.

The Baathist regime of Saddam Hussein constituted a Sunni bulwark against Iran’s meddling in the Arab World. But after Saddam was ousted from power in 2003 and subsequently when elections were held in Iraq which were swept by the Shi’a-dominated parties, Iraq has now been led by a Shi’a-majority government that has become a steadfast regional ally of Iran. Consequently, Iran’s sphere of influence now extends all the way from territorially-contiguous Iraq and Syria to Lebanon and the Mediterranean coast.

The Saudi royal family was resentful of Iranian encroachment on traditional Arab heartland. Therefore, when protests broke out against the Assad regime in Syria in the wake of Arab Spring uprisings of 2011, the Gulf Arab States along with their regional allies, Turkey and Jordan, and the Western patrons gradually militarized the protests to dismantle the Shi’a Iranian axis comprised of Iran, Iraq, Syria and Iran’s proxy in Lebanon, Hezbollah.

Therefore, although the Sunni states of the Middle East and their jihadist proxies still toe the American line in the region publicly, but behind the scenes there is bitter resentment that the US has betrayed the Sunni cause by making an about-face on the previous regime change policy in Syria and the subsequent declaration of war against one group of Sunni Arab militants in Syria, i.e. the Islamic State.

Finally, another reason for Washington’s involvement in the Syrian civil war has been to ensure Israel’s regional security. The United States Defense Intelligence Agency’s declassified report [1] of 2012 clearly spelled out the imminent rise of a Salafist principality in northeastern Syria in the event of an outbreak of a civil war in Syria.

Under pressure from the Zionist lobby in Washington, however, the Obama administration deliberately suppressed the report and also overlooked the view in general that a proxy war in Syria will give birth to radical Islamic jihadists.

The hawks in Washington were fully aware of the consequences of their actions in Syria, but they kept pursuing the ill-fated policy of nurturing militants in training camps located in the border regions of Turkey and Jordan to weaken the Baathist regime in Syria.

The single biggest threat to Israel’s regional security was posed by the Shi’a resistance axis, which is comprised of Iran, the Assad regime in Syria and their Lebanon-based proxy, Hezbollah. During the course of 2006 Lebanon War, Hezbollah fired hundreds of rockets into northern Israel; and Israel’s defense community realized for the first time the nature of threat that Hezbollah and its patrons, Iran and the Assad regime in Syria, posed to Israel’s regional security.

Those were only unguided rockets but it was a wakeup call for Israel’s military strategists that what will happen if Iran passed the guided missile technology to Hezbollah whose area of operations lies very close to the northern borders of Israel?