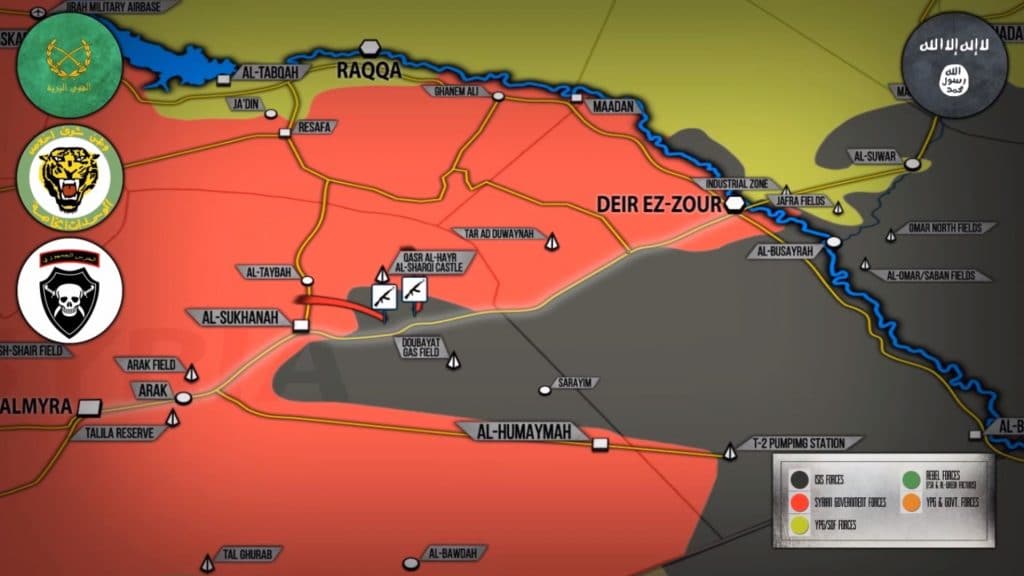 Government forces are securing the Deir Ezzor-Palmyra highway in central Syria after a major part of ISIS attacks in in the area has been repelled. The main area of clashes are now east of Sukhna.

The situation near Bir-Ghabaghib and Shula has been stabilized, according to pro-government sources. However, these reports lack video and photo evidences.

On October 2, reports appeared that alleged US airstrikes hit Hezbollah positions near T-3 Pumping Station and killed seven or eight Hezbollah members involved in a battle against ISIS in the area. The airstrikes followed a large ISIS advance in the area repelled by government forces.

Army Colonel Ryan Dillon, spokesman for the US-led coalition, denied that the strikes were made by the coalition and said that its area of operations was Raqqah and the eastern bank of the Euphrates.

Some pro-opposition sources argued that the Hezbollah members were killed in a friendly fire incident by Syrian or Russian warplanes. The situation remains unclear.

East of Salamiyah, the Syrian Arab Army (SAA) and its allies liberated Rubayah and Mughayzil from ISIS. Since August, the ISIS-held pocket has decreased from 3,270 km2 to 480 km2.

The US-backed Syrian Democratic Forces (SDF) advanced against ISIS near Hadin and Rubaydah villages northeast of Deir Ezzor city. The SDF progress near the Jafra oil field has slowed down because the group has to secure its northern flank if it wants to advance in the area.