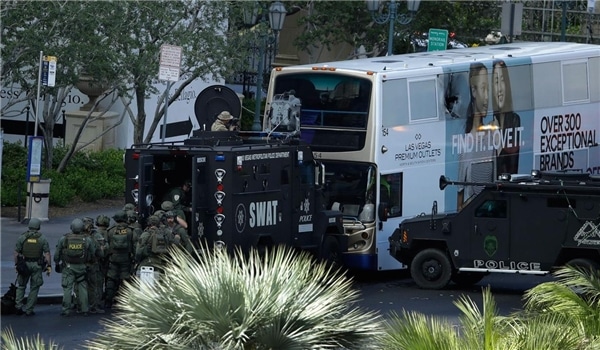 Reports said the gun tourism business in Las Vegas, Nevada, remains popular in the aftermath of the mass shooting that killed 59 people and injured over 500 others on Sunday night.

It was business as usual for shooting ranges across the city on Monday morning, merely hours after a 64-year-old man rained bullets on a large crowd attending a music festival next to his hotel, committing what has become known as the deadliest mass shooting is modern US history, pesstv reported.

While the tragedy has once again prompted nationwide debates over stricter gun control laws, shooting ranges in Vegas have been providing military-grade weapons to all people for a small price.

In one center, named Machine Gun Helicopters, the patrons can board helicopters and fire automatic weapons at human dummy targets from a chopper, in what the owners call a “true door gunner experience.”

A billboard for Battlefield Vegas, another shooting range, offers enthusiasts the chance to shoot a 50-caliber machine gun for only $29.

Ironically, the shooting ranges themselves agree that there should be more laws regulating guns across the US.

“We believe, as we always have, that there should absolutely be more stringent control on the types of firearms private individuals can own and the processes they must go through in order to own those firearms,” Machine Guns Vegas said in a statement emailed to the Huffington Post.

“There were many factors contributing to this tragic event, but there is no doubt that the shooter’s ability to inflict so many casualties was heavily due to the types of weapons he had access to.”

The more shocking aspect of America’s apparent gun problem is the fact that more people tend to buy guns following mass shootings like the one that happened in Vegas, says the Brady Campaign, a group that seeks to reduce gun deaths.

“Typically after mass shootings, gun sales go up,” said Avery Gardiner, the organization’s co-president. “I would guess that activity at shooting ranges follows that pattern, too.”

Trump has traveled to Las Vegas to meet with victims of Sunday night’s deadly shooting, while still refusing to talk about the broader issue of gun violence.

The issue seems to be widening at faster rates in Nevada, which has long been associated with the Wild West and gun culture.

“Nevada has some of the most lax gun laws in the nation,” Gardiner said.

During his visit to Vegas on Wednesday, President Donald Trump dodged questions about the issue of gun violence in his country.

Trump’s 2016 election campaign was heavily funded by the National Rifle Association (NRA), an organization which advocates for gun rights.