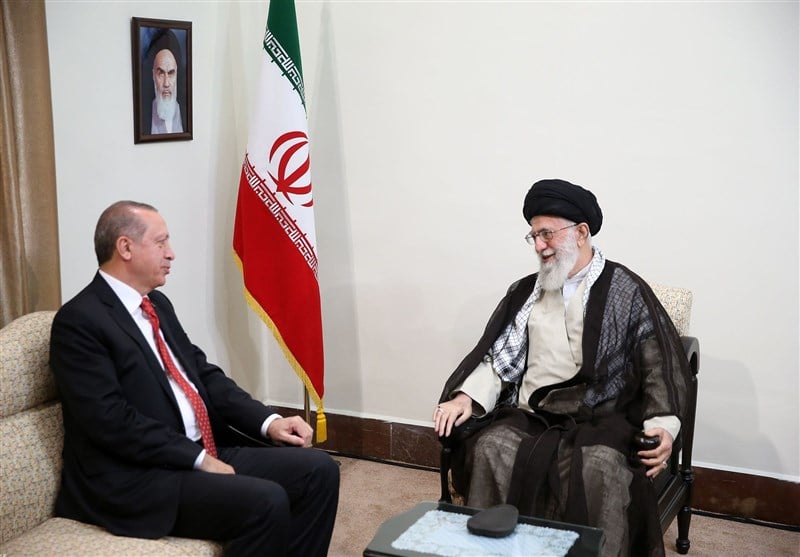 Supreme Leader of the Islamic Revolution in Iran, Imam Sayyed Ali Khameni on Wednesday told visiting Turkish President Recep Tayyip Erdogan that the United States is seeking to create new ‘Israel’ in the Middle East through the Kurdish secession bid.

The Leader warned that holding referendum in Iraqi Kurdistan is a betrayal of region and a threat to its future that will entail long-term repercussions for the neighboring states.

Imam Khamenei said that Iran and Turkey should do everything possible to counter the issue and the Iraqi government should take decisions seriously and take measures to that effect.

Cooperation, sympathy, unified and serious political and economic decisions by Iran and Turkey regarding the move is very important, the Leader told Erdogan, who arrived in Tehran earlier on Wednesday.

The Leader meanwhile, stressed importance of cooperation between Tehran and Ankara regarding serious problems faced by the Islamic world from East Asia and Myanmar to North Africa. His eminence described such cooperation as very significant and effective, saying it will benefit both nations as well as the Islamic world.

His eminence stressed the need to enhance economic cooperation between the two countries.

“Unfortunately, despite numerous capacities, level of economic collaboration has not increased at all and more needs to be done in the field,” Imam Khamenei said, according to Iranian media.

However, the Leader expressed pleasure over Iran-Turkey cooperation in Astana talks and improving trend of Syrian issues as a result of the collaboration. But his eminence noted that of course the issue of ISIL and other Takfiris will not end this way; rather it requires a long-term and actual plan.

Erdogan, for his part, stressed the need for establishment of a powerful unity between Iran and Turkey in the region.

“We managed to reach a conclusion during negotiations with the Iranian president on Syria and Iraq.”

The Turkish president stressed the need for joint and simultaneous actions by Iran, Turkey and Iraq on the issue of Iraqi Kurdistan.

Based on undeniable documents and evidence, the US and ‘Israel’ have reached a general agreement regarding the subject and (President of the Iraqi Kurdistan Region Massoud) Barzani made an unforgivable mistake by holding the referendum, Erdogan said.