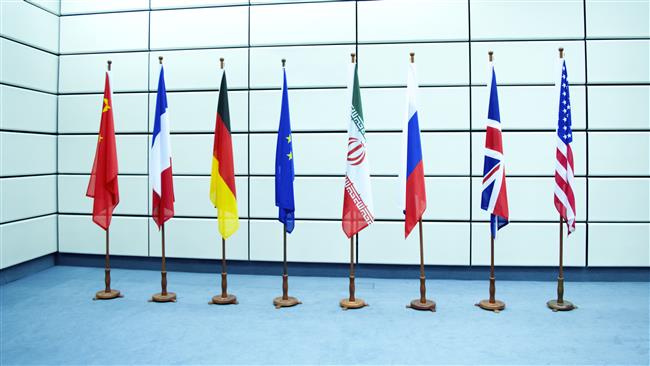 [ Editor’s Note: The showdown on the Iran nuclear deal is coming to a head, and hopefully corporate media might entertain questioning whose interests Trump is serving, when we have the unprecedented situation of both his Secretary of State and Defense chief publicly on board for the US to remain in the deal.

The common denominator we see going on behind the scenes is Israel, and to a lesser extent, the Saudis, as both have long histories of influencing our Congress and even presidents. The Bush Family financial involvement with the Royal family is a scandal – one of the highlights having been to bail Georgie 43 out of a failed oil venture, so it would not tarnish his future presidential run.

Trump has been effusive in his support for Israel, even overboard, which is hard to do with Congress using knee pads for what it does. There is little doubt that he made a promise to Israel to kill the deal and begin a new boogeyman PR routine on Iran, as only a bought-and-paid-for president could do, with similar parties in Congress joining the effort.

The strategy being used, a common one, is to leak its decision to let the resistance air out of the tires, and give Trump some clues as to how to handle the blowback. The EU has taken its own early steps with leaks as to its position, intending to stand by the deal.

Strangely, lightly covered in corporate media is how Trump’s breaking the deal, if not legally so, then certainly in spirit, completely undermines any defense-related deals it would be a party to in the future – like North Korea. The US signature on a deal would not be worth spit.

Actually it isn’t worth anything now. Any country that signs such deals that is actively engaged in using state-sponsored proxy terrorism, in what is coyly always referred to as “pursuing our interests, is a fraud; and Trump is openly putting the US into that category.

Russia is now throwing in its own curve ball, with its effusively warm relations with Saudi Arabia, which has also been a major supporter of state-sponsored terrorism in Syria, along with the US and Israel, and also Turkey when it suited Erdogan. This is one hell of a sad state of affairs… Jim W. Dean ]

The European Union (EU) will not follow the United States if Washington decides to trample on its obligations under a multilateral nuclear deal with Iran, says a European official.

The administration of US President Donald Trump has long despised the deal, officially known as the Joint Comprehensive Plan of Action (JCPOA). Trump has previously threatened to “rip up” the deal, has called it “the worst deal ever,” and, most recently, called it an “embarrassment” to the US.

Since taking office a year after the deal took effect, Trump has twice certified Iranian compliance to the Congress under an American law, but those certifications were offered only half-heartedly, and all indications are that a third one — due shortly — may not be forthcoming. Administration officials have said Trump is expected to “decertify” the deal next week.

In case Trump refuses to certify Iranian compliance, Congress will have 60 days to decide whether to restore the sanctions against Iran that the US has agreed to waive under the JCPOA. The re-imposition of nuclear-related sanctions would be a major breach of the deal by the US.

If that happens, the EU will not follow suit and will not be breaching the JCPOA, The Washington Post on Thursday cited a European official as saying, without naming him.

“We will not follow the United States in reneging on our international obligations with this deal,” said the official. “Not the E-3, nor the rest of the 28” members of the EU, he added, referring to France, the United Kingdom, and Germany, the three European parties to the deal with Iran.

Senior EU officials have repeatedly supported the Iran deal. The bloc’s top diplomat, Federica Mogherini, has several times come out strongly in support of the JCPOA by stressing that it is a multilateral deal and that an individual party cannot decide to scrap it without a valid reason.

But the remarks by the official in the Post report are the strongest, most explicit indication yet that the US will have to forgo the partnership of its European allies if it decides to re-impose nuclear-related sanctions on Iran.

Iran’s Foreign Minister Mohammad Javad Zarif said recently that Tehran would not rush to scrap the deal if Washington chose to unilaterally walk away from the agreement and would wait to see how Europe reacted, among other things.

Washington had managed to get Europe on board with harsh sanctions imposed on Iran over its nuclear program prior to 2012. There had already been negotiations between Iran and European countries over the Iranian nuclear program, but reinvigorated talks and relentless diplomacy that began in 2013 finally led to a deal between Iran and its latest interlocutors, namely the P5+1 countries, two years later.

Between a rock and a hard place

The P5+1 countries are the US, France, Russia, China, the United Kingdom, and Germany. Apart from the US’s new administration, all the other parties to the deal have been stressing that Iran is compliant with its contractual obligations and that the deal should stand.

They have indicated an unwillingness to allow a painfully-negotiated agreement to be put to waste because the new US administration is unhappy with it.

European governments already feel shortchanged by the US because Washington has announced a unilateral withdrawal from another hard-fought deal, the Paris climate accord.

If the US stopped carrying out its obligations under the Iran deal, the Europeans would have to decide whether a breach has taken place by America. It would be difficult for them to say it has not. So will it be for Washington’s closest allies not to take its side.

“What do we do? What do we say? It would be a big crisis!” another senior official from one of the three European parties to the JCPOA told the Post.

‘Nothing is decided on the Hill’

As a refusal by the White House to certify Iranian compliance is almost certain, European diplomats have reportedly been lobbying the US Congress to decide against a re-imposition of sanctions on Iran.

“We’re working the Hill a lot,” the second official said. “What we understand is that there is no inclination in the Senate to kill the deal by voting immediate sanctions. Staffers tell us that nothing is decided.”

Many European businesses that had been forced out of Iran as a result of the nuclear-related sanctions — often suffering financial losses or losing benefits in the process — have returned to the Iranian market following the conclusion of the JCPOA. A potential re-imposition of sanctions, including penalties on international firms that do business with Iran, is thus particularly disconcerting to Europe, which says it bore the brunt of such sanctions in the past.

Another diplomat in Geneva said Europe was contemplating introducing regulations to shield European businesses and individuals against potential US sanctions targeting Iran.

Trump’s own national security team has reportedly been opposed to a “decertification” at least as long ago as July. Secretary of State Rex Tillerson and Defense Secretary Jim Mattis — an Iran hawk — have indicated that a decertification is not in the US’s interest.

Thus, given the opposition by the senior US officials as well as Europe, Trump might single-handedly deepen the transatlantic divide by potentially going ahead with a “decertification” next week.