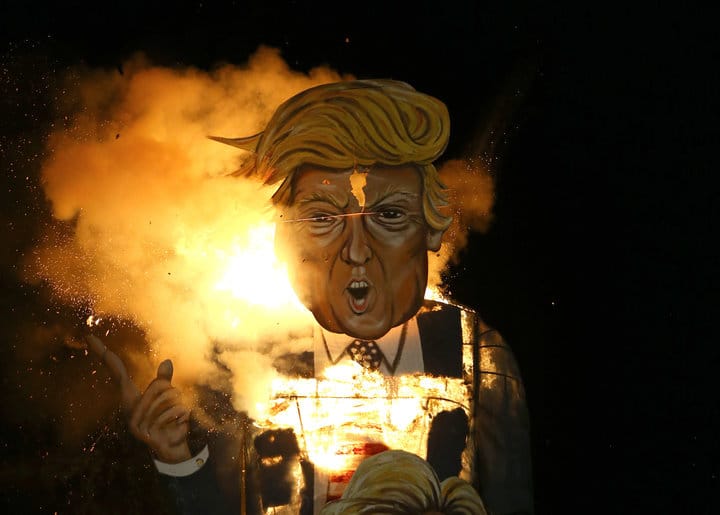 [ Editor’s Note: We have stage two of the JCPOA deal leaks rolling out with this new story that Trump will decertify the agreement and kick it into Congress to decide on renewing sanctions.

The New York Times is saying that it seems unlikely, which seems strange. The Israeli Lobby would put a full-court press on to scuttle the deal and renew sanctions, and the Saudi Royals would get their checkbooks out, which has worked well in the past.

But we do see a consensus among grownup observers that the damage to international relations, especially in Europe, is a classic case of the cure being worst than the disease, which I totally agree with.

Lurking in the background with little coverage is the issue that killing the Iran deal would also virtually kill any potential resolution with North Korea, as the NK would never go for anything with a US signature on it – and rightly so.

It would be worthless, similar to the US claims of running a War on Terror when we are up to our eyeballs in our use of proxy terrorists in Syria and other countries – a national scandal which has gotten little domestic political attention.

Trump has his Secretary of State and Defense chief against killing the deal, and the EU says it would be unhappy if the US attempts to punish the EU economy by killing the trade deals the EU has developed with Iran. But that is exactly what the Israelis and Saudis want… Jim W. Dean ]

US President Donald Trump is expected to “decertify” the 2015 nuclear agreement with Iran, while quietly encouraging Congress not to reimpose sanctions that could unravel the landmark deal, according to reports.

Trump’s national security advisers have recommended he should not certify the nuclear deal, officially known as the Joint Comprehensive Plan of Action (JCPOA), but keep the agreement intact for now.

Trump, who has described the accord as “the worst deal ever,” has until October 15 to decide whether to certify that Iran is in compliance with the accord.

Under the deal, Washington agreed to waive nuclear-related sanctions in exchange for Tehran restricting its nuclear program. Trump’s senior advisers have been warning him that other signatories to the JCPOA, including European allies, were unlikely to reimpose their own sanctions if the US decided to withdraw from the deal.

Meanwhile, a group of European ambassadors made a trip to Capitol Hill to make their case before Congress that the nuclear agreement should remain in place.

The ambassadors from the UK, EU, France and Germany met with at least 30 senators this week, warning that there is a “lot of misunderstanding” on Capitol Hill regarding the Iran deal.

They also noted that other signatories to the JCPOA – Russia and China in particular – have little appetite for reopening negotiations on the accord. Tehran has also repeatedly made clear it has no intention of renegotiating the terms of the deal.

Trump has accused Iran of not keeping with the “spirit” of the international deal. “They have not lived up to the spirit of the agreement,” he said at a White House meeting with senior military leaders on Thursday.

The warning came two days after Secretary of Defense James Mattis told a congressional panel that he believed the deal was in America’s interest and that Trump should “consider staying in” the accord, Secretary of State Rex W. Tillerson has also publicly supported the agreement with Iran.

However, Tillerson and others have worked on a strategy under which Trump would “decertify” the nuclear accord but pass the baton to Congress to save the agreement. After that, Congress would rescind a law requiring the president to certify Iran’s compliance every 90 days.

In 2015, Congress passed the Iran Nuclear Agreement Review Act. The law, among other things, requires the president to certify every 90 days that Iran is complying with the terms of the deal and that continuing to waive sanctions is in the “national security interests of the United States.”

President Trump has already done that twice – albeit reluctantly.

White House Press Secretary Sarah Sanders said Thursday that Trump had made a decision on the nuclear accord and would announce it “soon.”

“The president’s team has presented a united strategy that the national security team all stands behind and supports,” she said.

If Trump refuses to certify the JCPOA, which he is expected to announce during a speech on Tuesday, Congress has 60 days to decide whether to put sanctions back on. Even if that happens, a dispute resolution process written into the deal provides another month before the US can withdraw from the UN-backed agreement.

The International Atomic Energy Agency (IAEA) and the US intelligence agencies have said that Iran is in compliance with the JCPOA. However, Trump might use the “national security interests” card as a pretext to “decertify” the deal.

US Ambassador to the UN Nikki Haley said last month that Trump was likely to point to Iran’s missile program as well as its support of Hezbollah to argue that the nuclear accord was not in US national security interests.

However, the Europeans diplomats assert that none of these issues are covered in the JCPOA, which was specifically limited to Iran’s nuclear activities.