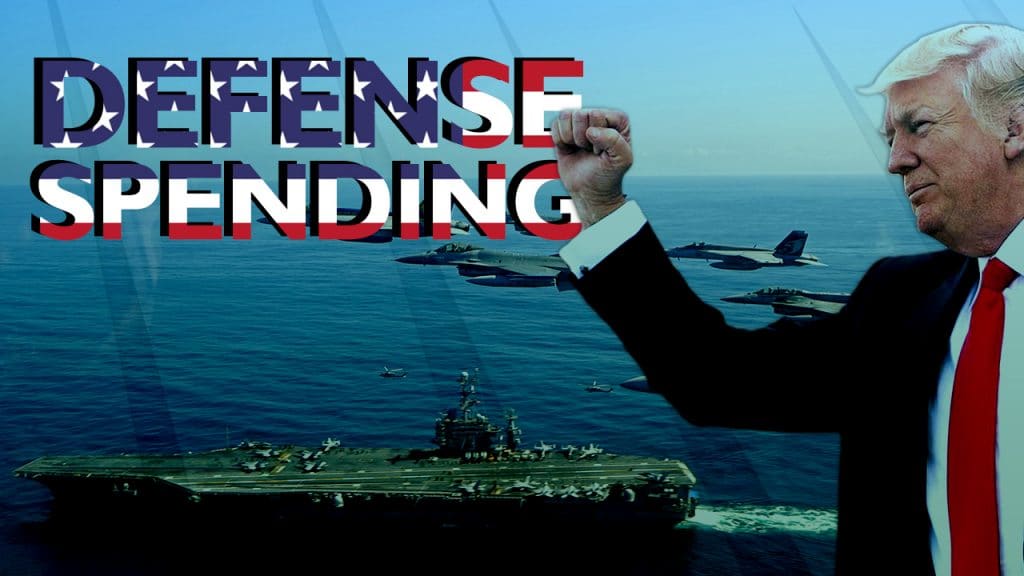 One of Donald Trump’s campaign promises was the pledge to “rebuild the US military”, and it is one of the few of his initiatives that appears to enjoy broad bipartisan support. The US Senate’s version of the defense appropriations bill provides for what amounts to a dramatic 10% increase in defense spending, or more than even the Trump Administration requested. The bill passed with a strong bipartisan majority and with hardly any debate. There is no reason to expect the House of Representatives will not follow suit. This naturally raises the question: what is behind the sudden interest in boosting US defense spending, after a decade and a half of continuous war?

The official reason for the boost, and one that has some merit, is the sorry state of the US military. The wars in Afghanistan and Iraq, plus the various and sundry other operations against Libya, Syria, Yemen, Somalia, not to mention the confrontations with Russia, China, and North Korea, have left the US military stretched thin and demoralized. Much of the Army and Marine equipment pool has incurred significant wear and tear from operating in the hot and dusty Middle East conditions. The air force has been reduced to a collection of on-call bomb trucks supporting land operations. Even the navy, easily the least-engaged of the three services, has had to station carrier battle groups to contribute their airwings to the ground support mission, and thus justify the existence of the costly carrier fleet. The result is a force with significant morale and training problems which manifest themselves in crashing planes and colliding warships.

It is doubtful, however, that Congress is so eagerly “supporting the troops” for the reasons outlined above. As the recent US elections have demonstrated, the US economy’s softness is leading to unpredictable and uncontrollable election outcomes. Moreover, ideological opposition makes public spending extremely difficult to provide, with defense spending being the one solitary exception. The members of Congress are therefore supporting the defense appropriations bill with the expectation it will create jobs in their districts and states. Defense contractors themselves go out of their way to “educate” the legislators of the benefits associated with supporting this bill.

Donald Trump’s own motives likely aren’t all that different. While he campaigned on, for example, a “trillion-dollar investment in infrastructure,” the chances of such a program being passed by Congress are between slim and none. So offering a de-facto trillion-dollar increase in defense spending is the next best thing, as it may well translate into enough jobs in key states to ensure a margin of victory in the 2020 election.

But there is also a deeper sense to this effort, as the US establishment seems to try to re-enact the 1980s. And for a good reason. It was quite literally the last decade of America’s greatness, the last decade in which the country elected a president by a landslide–Ronald Reagan in 1984–and the last decade in which it scored a genuine, unalloyed geopolitical triumph in the form of the collapse of USSR and the emergence of the US as the sole hegemonic power. Therefore it is no surprise that US decisionmakers want to use it as a blueprint for repeating the earlier success.

Indeed, if one looks at the origins of America’s 1980s triumph, it is easy to see similarities between the current policies and US policies of 1970s and 1980s. The prescription for success looks something like this: first, end unpopular costly quagmire wars, retrench, carry out domestic reforms liberalizing the economy, run up national debt through massive deficit spending, pump hundreds of billions of dollars of new spending into a revitalized all-volunteer force benefiting from a technological leap forward, and watch the geopolitical benefits practically reap themselves!

But it’s unlikely this feat can be repeated. There is no next generation of US weapons comparable to the Abrams and Bradley armored vehicles, F-15 and F-16 fighters, or AEGIS destroyers that would provide the US with the sort of qualitative advantage it enjoyed in the 1980s and 1990s. It seems highly unlikely the US will be able to extricate itself from the debilitating wars in the Middle East. Trump is no Nixon, he lacks the foreign policy credibility sufficient to persuade the US establishment to accept at least a temporary loss of influence in the Middle East. Most importantly, while Reagan benefited from a stagflationary economy that benefited from liberalization and deregulation, and a low level of national debt, Trump has neither. US economy is suffering from neoliberalism and globalization taken to their logical extremes, not over-regulation or over-taxation. The US national debt is reaching its historic maximums. And, last but not least, China today is an economic powerhouse while Russia’s economy is on a far more sound footing than the Soviet economy was in the 1970s and 1980s.

The danger here is that, aware that the time is not on their side, the US elites may engage in more international adventurism to a far greater extent than Reagan did in Grenada and Lebanon. Unfortunately, there are few indications the US elites have accommodated themselves to the new, post-hegemonic, international balance of power, and the boost in military spending is a reflection of their efforts to recapture past glories. But it is unlikely they can reverse the process of US hegemonic decline. Indeed, this effort actually represents a still-heavier burden on the already weak US economy.