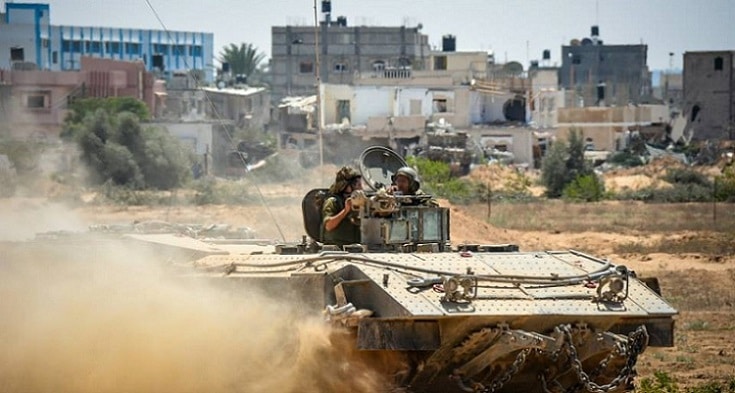 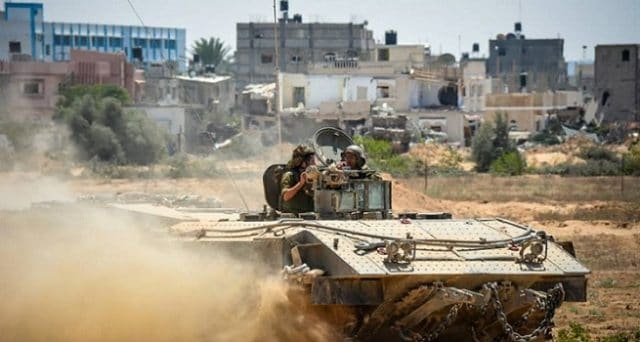 [ Editor’s Note: Phil Butler has a well-timed rundown on Israel’s plans to salvage, when it can, from its disappointment in not enjoying Syria as a crushed and Balkanized neighbor – and a reality where Israel would not be effectively controlling the territory north and east of the Golan Heights.

The Likuds sense some political vulnerability as in, “what would we do now, if we are out of power, and the ruling government has just racked up a failed proxy terror war on our hated neighbor?”

So the Likuds are doubling down by using a tried and true method – inventing an even bigger bogeyman threat than it had before – the big whopper. The concept of Syria having the right to maintain a permanent counter-terrorism force, which is the main thing that has saved Syria, is not something the Zios will acknowledge. No one has the right of self-defense in their book, except themselves.

Iran being in Syria is now its cause célèbre, which means it can do anything it wants to “defend” itself, and that includes helping start a new proxy war via the Kurds in Iraq. And Bibi would lose no tears if that proxy war triggered large scale rebellions in both Iran and Turkey.

The Russian-Turkish pipeline into Southern Europe is deemed to cut Israel off at the pass in getting its own offshore energy deposits into the EU market, despite their being behind on their own development plan. And the new discoveries under the Golan Heights, and their questionable ownership, might also be trumped (pardon the expression) by the Russian-Turkish pipeline.

As I have so often said, Israel really has no friends, just people who it is using to get what it wants, and with no bad feelings, as Zionists figure that if the situation were reversed, then their targets would be doing the same, if they could. They have a “do unto others as they would do unto you” – a convenient philosophy to justify whatever they want to do.

VT, in the briefings we are doing now, to those that want to hear, are sharing that we do not see a single conflict going on now that does not qualify as a manufactured war. These are being carried out at the will of, and for the benefit for, a variety of special interests; and where all public institutions in almost all democratic countries have refused to even discuss this threat publicly.

NATO is not innocent, as it only had two choices – to stand with the folks or take the Deep Staters on, going over to whom it thought the winning side would be. I will let you guess whose team it is on. That the public actually funds this as part of its “defense” budget is one of the greatest successful psychological operations in history. And thus ends my cheery missive for today… Jim W. Dean ]

Finally, the skeleton is out of the Arab Spring closet via an article in Foreign Policy written by Jonathan Spyer. Israel has been at war for total dominance in the Middle East and, according to the senior research fellow at the Global Research in International Affairs Center (Rubin Center) and Jerusalem Post columnist, Tel Aviv is about to engage in Syria to confront Iran.

All I can say is, if the director of one of Israel’s research centers located at the Interdisciplinary Center (IDC) is right, then the kickoff to Armageddon could be around the corner. For some months now my research and reporting on Syria and the wider crises has revolved around Israel’s role in world affairs. So, with this revelation it seems clear that the gloves will soon come off where Israel as the instigator of crises is concerned.

Bibi and Trump meeting in Washington, the role of AIPAC in pressing for sanctions on Russia, Iran and North Korea, and the provocative geostrategic role the Netanyahu government has played equal overwhelming circumstantial proof of the tiny nation’s responsibility for Middle Eastern chaos. Quoting Speyer:

“Israeli officials believe that Iran is winning its bid for dominance in the Middle East, and they are mobilizing to counter the regional realignment that threatens to follow. The focus of Israel’s military and diplomatic campaign is Syria.”

From my point of view, I cannot decide which facet of this news is scarier, the apparent fact that top Israeli analysts now don’t care about public opinion or the possibility that Israel really might go nuclear against Iran. The Foreign Policy article also reveals Israeli motives that have driven international incidents.

For instance, with regard to the United States’ initial psychotic episode over chemical weapons that the Assad government was supposed to have used against its own people, those “weapons fears” had nothing whatsoever to do with Syrians. Spyer takes special note of Israeli missions against chemical weapons facilities at Masyaf.

Let’s face it, Israel does not fly missions to rescue endangered Arabs. But the acute problem for the Israeli regime is not Assad anymore. Since the Syrian Army with Russian and Iranian assistance has nearly eradicated ISIS, Tel Aviv is worried about the aftermath of the Syrian mess. And about their precious Golan Heights. Quoting FP again:

“Iranian forces now maintain a presence close to or adjoining the Israeli-controlled portion of the Golan Heights and the Quneitra Crossing that separates it from the Syrian-controlled portion of the territory. Israel has throughout the Syrian war noted a desire on the part of the Iranians and their Hezbollah clients to establish this area as a second line of active confrontation against the Jewish state, in addition to south Lebanon.”

The Israeli expert goes on to assert that “Syria hardly exists today”, and proclaims Iran and Russia the “masters” of the war-torn country. The Foreign Policy article lays out in no uncertain terms the essential mindset and strategy Israel has deployed against neighboring enemies and allies alike – even though the author did not intend to do so.

By showing what Israel fears most, and in listing in convincing form the geopolitical and military counterweights of Tel Aviv, Spyer betrays the actual intentions of Israel. Read how Israel has worked with rebels inside Syria:

“Israel has developed pragmatic working relations with the local rebel groups who at the moment still control the greater part of the border, such as the Fursan al-Joulan group. This cooperation focuses on treating wounded fighters and civilians, and providing humanitarian aid and financial assistance. There has also probably been assistance in the field of intelligence, though no evidence has yet emerged of direct provision of weapons or direct engagement of Israeli forces on the rebels’ behalf.”

Finally, scanning reports and propaganda from the Rubin Center’s website one finds the Israeli group not just focused regionally. First, we find this Spyer fellow with eyes on Ukraine and the Jewish community there in a piece for Jerusalem Post portraying pro-Russian factions as Nazis. Next, I find it interesting that the Caucasus and Georgia are covered in depth.

A story by Mahir Khalifa-zadeh (a veteran of the Kosovo OSCE mission in 1999) from September of 2014 entitled “The South Caucasus: Obama’s Failed Russia “Reset” and the Putin Doctrine in Practice” betrays Israeli geostrategy in the heart of that more distant calamity.

A pragmatic person might ask the question here, “Was Israel against a reset of US-Russia relations?” The answer there leads us to new ideas on just “who” is behind the current west-east divide. Quoting from the report:

“Since 2009, under President Barack Obama, the U.S. has pursued a “Russian reset” policy, promising a fresh start to previously tense relations. Yet this policy has failed to improve American interests, particularly in the South Caucasus region, which is strategically important for both Israeli and U.S. policy towards the greater Middle East and the post-Soviet space.”

This report from the Azerbaijani expert touches on US and Israel “energy security”, which also reflects the core catalyst for crisis in these regions. We don’t often read or hear about the so-called Contract of the Century between Azerbaijan and the big oil heavyweights in the west, but this quote frames the issue well:

“The discovery of the Azeri, Chirag, and Guneshli oil fields in that region significantly energized U.S. policy and diplomacy to transform the area into an important source of non-Middle-Eastern energy. Huge Azeri oil and gas reserves also raised the issue of energy transportation routes to bypass Russia.”

Bypassing Russia and Iran, cutting Syria off as a gateway for delivering energy, destroying any semblance of resistance to Israeli power in the region, shoring up America’s dominance in the global scheme – these deals and strategies show tradeoffs that have created massive crises. And the Zionists that run Israel are smack in the middle of all of them. This is no longer arguable. The question remains, “What can we do about it?”

The answer to the question is not a positive one, for in the west the game is pretty much rigged. Citizens are either distracted by local crises, or they are uneducated and apathetic toward global geopolitics. In short, we’re ill prepared to do anything at all. This is one reason why we see globalist magazines like Foreign Policy, and even leading politicians, unafraid to simply lay out the plans.

These revelations we are seeing are a consequence of our own indifference, and the solutions to Israeli or US encroachments are not easy for people to accept. Where Tel Aviv is concerned, the only mediation that will get its attention is force.

In my opinion, until the international community (or Russia perhaps) slaps Israel down (and hard) these crises will only escalate. Israel had the key role in Arab Spring, and in the regime change targeting Assad and Syria. As a result, millions of people are now displaced or worse. It’s high time that these Zionist autocrats face the music. The alternative will be a cataclysm.