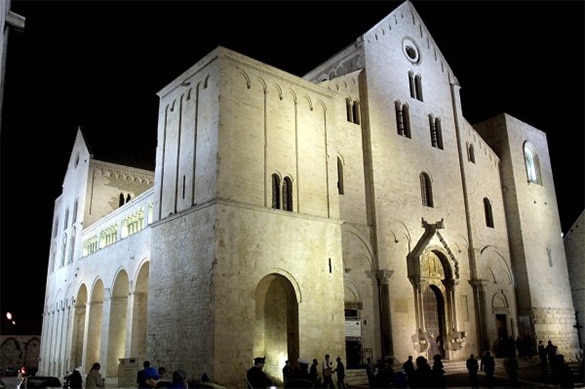 Basilica of St. Nicholas in Bari

Turkish archaeologists say that they have unearthed the genuine burial ground of Nicholas (Nikolaos) of Myra – a saint revered by Orthodox and Catholic churches, who lived in the territory of modern-day Turkey in the IV century. Until recently, it was believed that Italian merchants stole the relics of the saint in 1087 and transported them to the city of Bari, to rescue them from desecration.

The head of the Antalya Monument Office, Cemil Karabayram, believes that it is the body of another Christian bishop that is buried in Bari, whereas the real Saint Nicholas was buried in Demre, where his body is still resting. If this theory is true, it will just so happen that millions of Christians worldwide were worshiping the wrong relics.

According to Hurriyet Daily News, an intact temple was discovered during archaeological excavations in the southern Turkish province. In the temple, there is a special site where, the grave of the saint is located, the researchers believe.

The archeological works on the territory of the ancient temple continue for three months already. The works develop extremely slow as archeologists try to mark every stone to reconstruct the building completely and preserve the mosaic.

“We believe this shrine has not been damaged at all, but it is quite difficult to get to it as there are mosaics on the floor,” Mr Karabayram told the Turkish Hurriyet Daily News.  “We have obtained very good results but the real work starts now,” he said, adding that the temple is almost fully intact. “We will reach the ground and maybe we will find the untouched body of Saint Nicholas,” he said.

According to Karabayram, the whole world will pay attention to the uncovered temple. In addition, the discovery will take tourism in Turkey’s Antalya to a whole new level.

Nicholas the Wonderworker, who is also called Nikolai the Savior in Russia, was born in Asia Minor in the III century in the Greek colony of Patara in the Roman province of Lycia. During his life, he became known as the pacifier of warring parties and defender of innocent convicts. St. Nicholas was known for his love for children. His legend led to the appearance of Santa Claus, who loves all children very dearly and gives them gifts on Christmas.

It is believed that touching the relics of St. Nicholas heals practically any disease. In Russia, Orthodox believers pray to St. Nicholas asking him for  health, healing, solution of problems, success in business and many other things.

According to the church calendar, celebrations in his honor take place twice a year: on December 19, the day of his death, and on May 22 – in memory of the transfer of his relics to Bar (now Bari). In the Russian folk Orthodox tradition, these holidays are known as “Winter Nikolai” and “Spring Nikolai.” Christians believe that St. Nicholas helps those who pray to him even today.

St. Nicholas became famous worldwide in the 16th century as a magician who gives presents to children. The Dutch, who arrived in the United States, popularized Santa Claus in the New World, whereas the commercialized 20th century turned the saint into a new symbol of Christmas, which, according to skeptics, eclipsed the image of baby Jesus Christ, whom the holiday is actually dedicated to.