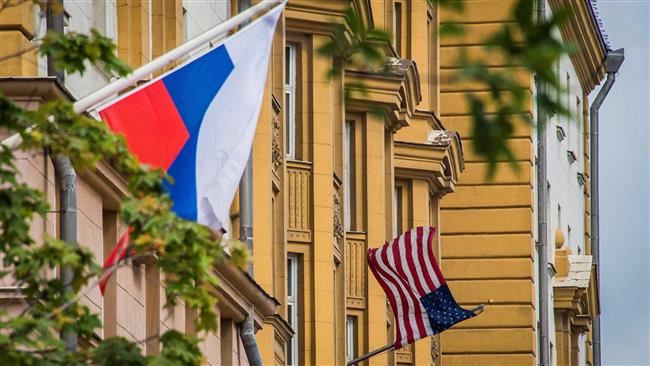 [ Editor’s Note: We have another case of US cowboy foreign policy boomeranging to put us in a worse situation than when we started, and no one taking responsibility for the stupidity.

The US had a larger superiority over Russia in the number of embassy staff, which of course gave us more warm bodies to run Intel operations under diplomatic cover, the safe way, where people that get caught are just deported. Russia gave Trump a lot of time to undo the goof, and he did not.

Yes, Russia had taken action against the massive US meddling in Russian elections, which we did via NGO’s pumping money and manpower into the anti-Putin political movement. Russia axed the NGO’s openly involved in this work, and the following election saw their numbers crash as they lacked what appeared to be US vote-buying.

But Moscow did not touch the US Embassy staff, despite its huge numbers and obvious involvement in the anti-Putin movement. The US initiated the embassy staff war, and the Russians only joined in reluctantly, as they knew it could turn into a tit-for-tat fiasco, which it has.

So the US staff got axed to numerical parity with Russia’s staff, but with Moscow holding back on a full cut by including the Russian staff working at the UN that were not really embassy staff.  Trump’s response was to double down and not only close more Russian facilities here, but to confiscate them, another escalation. Trump did this after campaigning on improving US-Russian relations from the Obama days.

So now we see Russia giving the US more time to reconsider before it makes more cutbacks in the US Embassy staff to reach full parity, and going further to warn that, if their seized facilities were not returned, there would be retaliation –meaning US diplomatic facilities would be seized in kind.

The big joke in all this is the US huffing and puffing about Russian attempts to influence the US election, when the US is the biggest election influencer on the planet, where rigging elections to put US surrogates in power is one of the main functions of the CIA, which has a huge record of doing so successfully.

But the main shame in all of this is pretending that fiddling with our election is some kind of horrible crime. We have not heard a peep of protest over the little country in the Mideast that has influenced US elections more than everyone else put together, and with what appears to be a virtual immunity, with not a word of protest from Congress, the media, security agencies or academia.

Israeli political espionage is rampant here because there is virtually no pushback by the FBI, whose agents are humiliated with being told to “block the espionage” as much as possible, but don’t bring any prosecutions – this includes all Israeli espionage, as that would damage US national security by hurting our “special relationship” with Israel. I am not making this up. That is what they trot out as an off-the-record justification.

The first time I had this laid out to me, I thought it was a big joke. But it was not. Both classified and declassified Intel confirmed it to be true. Israeli Lobby operatives actually brag about the influence they have over US elections; and our own media has been waived off going after them publicly.

To claim that we have been ill-served by our highly paid public security people would be an understatement. The FBI agents’ association could blow it all out of the water by going public on how bad it is and how they have been muzzled. Some would view allowing the Zionists to run a huge spy operation here would be active treason… Jim W. Dean ]

A Russia Foreign Ministry official says Moscow may order Washington to slash the number of its diplomatic personnel across Russia to 300 people or even fewer in a tit-for-tat measure against the US.

The statement was made Wednesday by the head of the Foreign Ministry’s North America Department, Georgy Borisenko, during an interview with Russia’s RIA news agency.

It came following warnings by Russian officials of their intention to respond to the September shutdown of Russian diplomatic missions across the US, including its consulate in the west coast city of San Francisco.

Earlier, Moscow ordered Washington to cut the number of its diplomatic and technical staff working throughout Russia by almost 60 percent — reducing the number to 455 — during a diplomatic row that began by the expulsion of 35 Russian diplomats in the final days of the former president Barack Obama’s administration in December 2016.

The figure of 455, according to Borisenko, had been meant to mirror the total number of Russian diplomats working in the US, but also included Russian diplomats serving at the United Nations headquarters in New York.

“The fact that in the summer, we took into account the people working for Russia’s mission at the UN, this was goodwill,” he said.

“If they haven’t appreciated this, we have the full right to reduce… the number of US diplomats further,” he said, explaining that Moscow could stop taking the number of Russian UN staff into account when calculating what parity between the two countries meant.

“In this case,” he said, “the number of American personnel in Russia should decline to a level of 300 or below.”

The development came two days after Foreign Minister Sergei Lavrov told his American counterpart, Rex Tillerson, that the Russian diplomatic properties had been “illegally seized” by the US government, demanding their return to Moscow’s embassy in Washington.

Lavrov further warned Tillerson during a phone conversation that Washington should be prepared for the consequences and possible retaliation if Russian diplomatic properties were not returned.