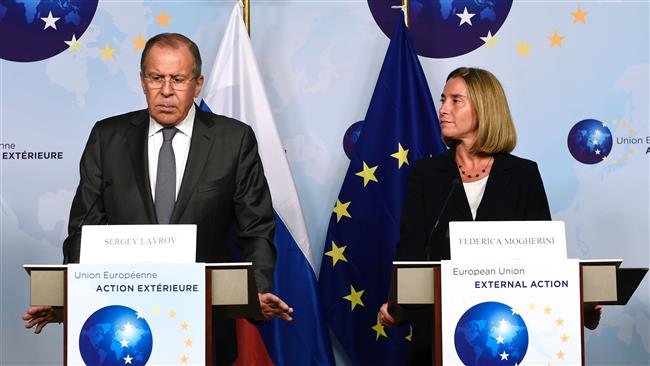 [ Editor’s Note: The EU now has its focus on dealing with Congress in not killing the JCPOA, as Mr. Reality TV is going to live up to his agreements to Israel and Saudi Arabia to back out of the deal and try to put the bogeyman back on Iran to trigger new sanctions.

This has nothing to do with security, really. Iran is a threat to no one. As its economy expands, it will have a lot more to lose in a shooting war, so claims of an Iran military threat are nonsensical. What we have is a two-headed monster here.

First, US-Israeli policy now considers any country in the region that can defend itself as a threat. What this really means is the US insists on maintaining its undisputed threat power, including Israel’s nuclear weapons and its ICBM program, which worldwide media shows no curiosity about. Why does Israel need the ability to strike the US, Russia and China with nuclear weapons? Why is the US subsidizing this effort?

The Saudis and the Israelis are only concerned about money. They know the potential for Iran’s future economic power – that it will dwarf theirs. Saudis are so lazy, considering any kind of work a semi-slave status, they are trying to buy into major technology, like the deal with the Russians for their first nuclear plant, which they only need to get weapons-grade material.

So it will be interesting to see how the EU will lobby Congress, with its own moral flexibility, when Saudi money is flowing around like water, and Israeli extortion and political espionage lurk in the background, where interfering in US elections is a national pastime for the Zios. You just can’t make this stuff up… Jim W. Dean ]

The EU, Russia and China have called on the US to maintain its commitment to the Iranian nuclear deal, which President Donald Trump is expected to declare no longer in America’s interest.

“We believe this deal is important to ensuring the international nuclear nonproliferation regime and regional peace and stability. We hope all parties can continue to preserve and implement this deal,” China’s Foreign Ministry spokeswoman Hua Chunying said Friday.

Both Mogherini and Gabriel acknowledged that Iran had fully lived up to its commitments under the Joint Comprehensive Plan of Action (JCPOA) as the nuclear accord is called, the state news agency IRNA reported.

They also said Iran should be allowed to benefit from the economic dividends of the deal reached with the US, the UK, France, Russia, China and Germany under which sanctions were lifted against Tehran.

Gabriel said on Thursday Trump’s reported plans to “decertify” the nuclear deal was alienating Washington’s European allies and pushing them towards Russia and China.

“Lavrov drew attention to the fact that Tehran abides by all its commitments on the JCPOA and stressed that the other co-authors must adhere to the document,” Russia’s Foreign Ministry said of the conversation.

Separately, Lavrov expressed doubt about the legal basis for the US to withdraw from the nuclear deal.

Lavrov, who was attending a joint press conference with the visiting Minister for External Affairs of Burundi Alain Aime Nyamitwe in Moscow, said the JCPOA had been “approved by the UN Security Council resolution” and is “subject to mandatory implementation.”

He said he did not know “what will be announced by the Americans,” but “given the status of the agreement, it is difficult to imagine how it is possible legally withdraw from it.”

Under the US law, the American government must verify to Congress every 90 days that Iran has been in compliance with the deal. It has done so twice so far. If Trump refuses to certify the deal, the Congress will have 60 days to decide whether to restore the sanctions against the Islamic Republic that the US has agreed to waive.

Trump has been critical of the agreement since he started campaigning for 2017 presidency. He has called it “the worst deal ever” and an “embarrassment” to Washington.

No other party to the agreement has vilified the deal, which the EU and the United Nations consider as a triumph for international diplomacy.