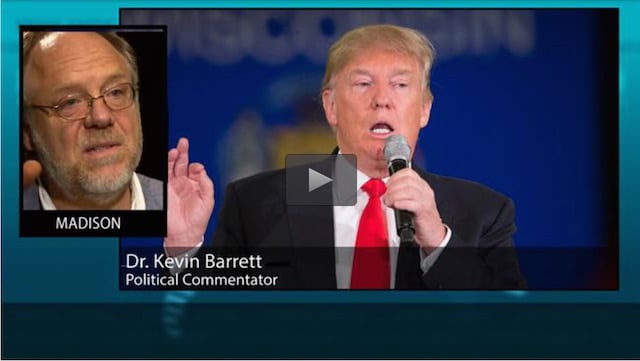 A political analyst believes that Israeli Prime Minister Benjamin Netanyahu is US President Donald Trump’s “puppet master” and that Netanyahu was behind Trump’s recent decision about the Iran nuclear deal.

VT Editor Kevin Barrett made the remarks in an interview with Press TV when asked about Trump’s decision on the 2015 nuclear agreement known as the Joint Comprehensive Plan of Action (JCPOA).

On Friday, Trump refused to certify the agreement and warned he might ultimately terminate it, in defiance of other world powers and undermining a landmark victory of multilateral diplomacy.

“We will not continue down a path whose predictable conclusion is more violence, more terror and the very real threat of Iran’s nuclear breakout,” Trump said.

“Once again Trump is giving us this extremely kind of paranoid and hostile approach to world affairs, we’ve seen this repeatedly with his exaggerated talk, his threats to North Korea and now he’s threatening Iran,” Barrett, an author and political commentator in Madison, Wisconsin, told Press TV on Friday.

He said Trump’s problem with Iran is not related to its nuclear program, but is about Tehran’s view on Zionism.

“Iran tells the truth about Zionism and reflects the opinions and views of the vast majority of people in the Middle East, about Zionism which is that Zionism has to end and Palestine has to be liberated,” he said.

“So that’s the real issue here and Trump’s extreme hostility towards Iran, which is all based on this non-existent problem around nuclear weapons, is really reflection of the fact that Netanyahu controls Trump’s White House,” he noted.

He also called Trump a puppet of Israel, who listens to Netanyahu and does as he says.

“Trump tells us that he first decided to run for president precisely because he wanted to tear up the Iran deal,” he said, adding, “He just said that on a number of occasions (and) what that really means is that Netanyahu people put him up to running for president for that reason and hammered that issue home to him.”

Trump is required by law to certify every 90 days whether or not Iran is complying with the nuclear deal. If he argues that Iran is not in compliance, that could cause an American withdrawal from the international pact.

While Trump did not pull Washington out of the nuclear deal, he gave the US Congress 60 days to decide whether to reimpose economic sanctions against Tehran that were lifted under the pact.