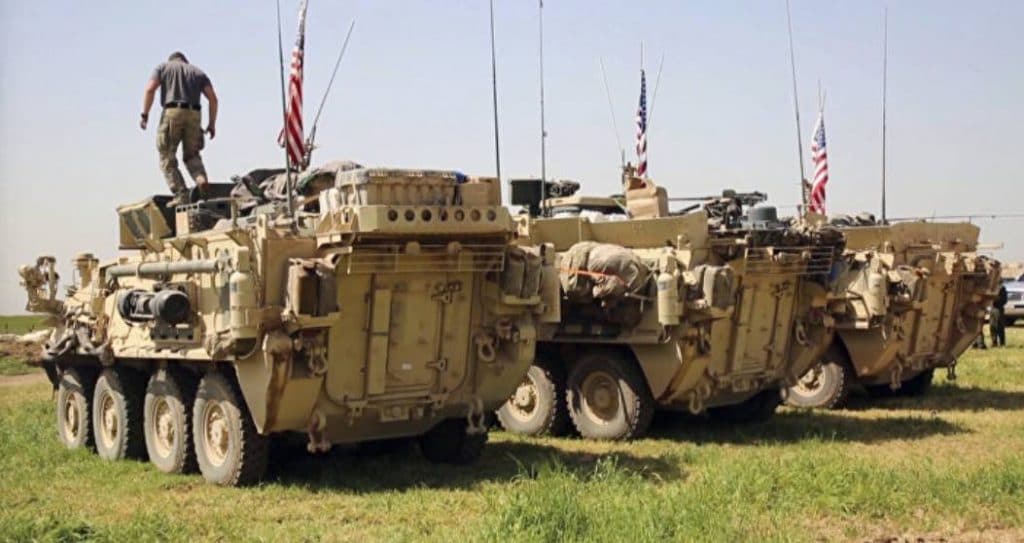 Sputnik/Moscow: Evidence continues to emerge that the US military forces in Syria and Iraq are cooperating with the Daesh terrorist group, Iranian political analyst Seyyed Hadi Afghahi told Sputnik. According to Iranian, Syrian and Russian military officials, the US support to terrorists undermine the efforts to end the war in Syria and Iraq.

There is a high probability that the US military forces are cooperating with Daesh (ISIS/ISIL) on the ground in Syria and Iraq, former Iranian diplomat and political analyst Seyyed Hadi Afghahi told Sputnik.

“The documents and videos available on the Internet, as well as the actions of American helicopters aimed at evacuating injured [terrorists] and the relocation of Daesh commanders, prove [this collaboration],” Afghahi told Sputnik Persian.

“The US has even gone further and instructs other countries how to act in order not to harm Daesh: Otherwise, they themselves may become the target of American aircraft.”

“We have documents showing the behavior of the Americans in Iraq and Syria; we know what the Americans did there; what they neglected and how they supported Daesh.”

On Wednesday, a commander of the IRGC’s Ground Force, Brigadier General Abdullah Araqi, told journalists that “the US had provided logistic support to Daesh in the Syrian province of Dayr al-Zawr as well as in the Iraqi provinces of Diyala, Nineveh and Salahuddin,” as Press TV reported.”There is undeniable evidence of support for terrorist organizations on the part of Western and some Arab states,” Afghahi emphasized.

The analyst said that many times when Daesh militants were encircled unmarked US-made aircraft dropped weapons, medicines and food for the terrorists, while Israeli ambulances evacuated injured Daesh fighters from Syria and drove them to hospitals.

Second, new information revealing Gulf nations’ potential collusion with Daesh has emerged amid the current political standoff between Qatar and Saudi Arabia, he noted, adding that both countries are now busy publishing compromising documents which shed light on collusion with terrorists on the part of different countries and entities.

US’ Plan B? From Alleged Evacuation of Daesh to the Murder of Russian General

“For example, Al Jazeera’s channel published an interview with a commander of Kurdish paramilitary groups (Peshmerga), who, when asked why they did not shell at Daesh caravans, responded that if they tried to do this, the Americans would have destroyed them,” Afghahi remarked.

Third, in recent weeks the Americans conducted several operations to support Daesh in the Syrian regions of Al Badia, al-Sham and Deir ez-Zor, the political analyst continued, stressing that US and Israeli aircraft had repeatedly hit positions of the Syrian Arab Army (SAA) and Hezbollah there.

A fourth argument cited by the Iranian analyst is the location of Daesh commanders during the battle for Tal-Afar, a city in the Nineveh Governorate of northwestern Iraq. Referring to reports by Arab politicians and military commanders, Afghahi said that US choppers had transferred Daesh high-ranking fighters from Tal-Afar to Iraqi Kurdistan. The analyst dropped the hint that the Iraqi Kurdish government headed by Masoud Barzani and the US could have assisted the retreating extremists.

“All these documents and facts indicate that Western intelligence agencies, including the CIA [Central Intelligence Agency] have been covertly facilitating Daesh [actions],” Afghahi believes.

This Saturday, April. 29, 2017 still taken from video, shows an American soldier standing on an armored vehicle in the northern village of Darbasiyah, Syria

It appears that the successful advance of the SAA against Daesh and al-Nusra Front in Syria has prompted much controversy on the ground.

Amid the SAA’s Deir ez-Zor operation a diplomatic and military source informed Sputnik on September 7 2017 about the alleged evacuation of over 20 Daesh field commanders by US Air Force helicopters from the region to northern Syria.

On September 20 the Russian General Staff reported an attack against Syrian government troops carried out by al-Nusra Front terrorists who used artillery, tanks and infantry fighting vehicles in the Idlib de-escalation zone. The statement highlighted that the assault was “initiated by US secret services to stop the successful advance of the government troops to the east of Deir ez-Zor.”

The images indicated that the US coalition forces were facing no resistance from the terrorists on the ground. “This shows that all the US servicemen who are currently there, feel completely safe in the areas under the terrorists’ control,” the ministry outlined.

On the same day the Russian Defense Minister reported that Russia’s Lt. Gen. Asapov, who assisted Syrian forces during the breach of Deir ez-Zor’s blockade, was killed in a “sudden Daesh mortar shelling.” According to the results of a preliminary investigation, the attack was conducted due to a leak of information on the Russian top commander’s location to the terrorist group.

Speaking to journalists, Russian Deputy Foreign Minister Sergei Ryabkov noted the death of the Russian general was the price that Russia paid for the duplicity of the US policy in Syria. The US State Department rejected the claim of its potential involvement in the matter.

Interestingly enough, a year ago, Syrian government forces came under “friendly fire” from the US aircraft in the same region: On September 16 Syria’s official SANA news agency reported that the US-led coalition aircraft had bombed SAA’s positions near Deir ez-Zor, killing at least 62 troops and wounding 100 more.
The airstrikes was immediately followed by a Daesh offensive.In early October Russian Foreign Minister Sergey Lavrov voiced concerns about the US’ staging fatal provocation against Russian servicemen in Syria in his interview with the Asharq Al-Awsat newspaper. He also cited the allegedly accidental attacks on the part of the US-led coalition against the SAA which were followed by Daesh advances.

As Russian Defense Ministry spokesman Maj. Gen. Igor Konashenkov remarked on October 4, “the main obstacle to the complete elimination of Daesh in Syria is not the military capabilities of terrorists, but rather the support of [our] American colleagues.”

US forces are seen at the Kurdish People’s Protection Units (YPG) headquarters after it was hit by Turkish airstrikes in Mount Karachok near Malikiya, Syria April 25, 2017.

Meanwhile, on October 9 Gen. Ali Al Ali, chief of the main operational directorate of the SAA, told reporters that “the United States delivered 1,421 trucks with military equipment and weapons between June 5 and September 15 this year to terrorists in Syria,” while demonstrating weapons seized from militants.

In response, a Pentagon spokesperson denounced the statements as “absolutely ridiculous and untrue” while speaking with Sputnik. And yet, the US actions in the Middle Eastern region continue to raise questions.

On October 10 Maj. Gen. Konashenkov drew attention to the continued provision of supplies to terrorists in Syria from their fellow militants in Iraq. According to the military official, the US-led coalition has dramatically reduced the intensity of its strikes against Daesh in Iraq.According to the Russian General Staff, more than 1,000 terrorists have to date entered the territory of Syriafrom the two provinces of Iraq where the US-led coalition is carrying out its anti-Daesh operation.

A day later, on October 11, the Russian Defense Ministry asked “the US side to explain its selective blindness regarding militants” operating near US forces in Syria, referring to the fact that some 300 Daesh terrorists on pickup trucks had infiltrated a US-controlled zone in the country’s al-Tanf region.

Then the jihadists tried to block a strategically important road linking Damascus and Deir ez-Zor, which is used for delivering humanitarian aid to civilians and supplies for the SAA, thus posing a threat to the ongoing peace process in Syria, Russian Defense Ministry spokesperson Maj. Gen. Konashenkov stressed.

However, the Pentagon continues to deny the allegations at the same time providing no explanations to the matters raised by the Russo-Syrian coalition.