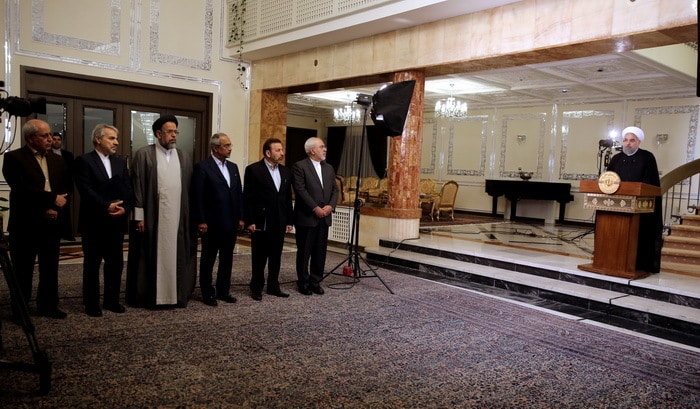 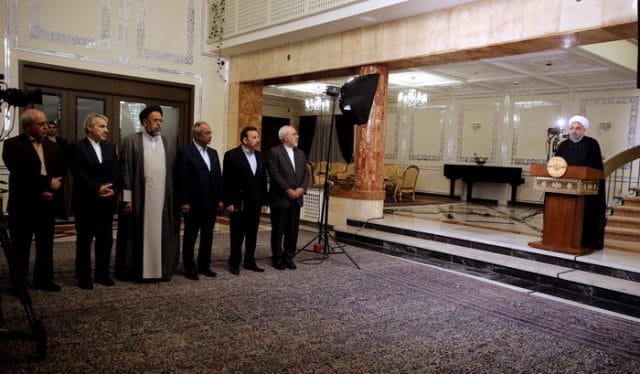 President Rouhani appeared in a live televised speech and described the statements of the president of the United States as nothing but insults and false accusations against the great nation of Iran, saying: “The Iranian nation is not a nation that surrenders to a dictator by false statements and hate speech and the great nation of Iran has never surrendered to any power”.

In response to anti-Iran stances of the US President Donald Trump, the President of the Islamic Republic of Iran stated: “The words of Trump proved that the Joint Comprehensive Plan of Action (JCPOA) is more solid than what this man thought during his presidential campaign, and the United States is more alone than ever on JCPOA and its conspiracies against the Iranian nation”.

“Tonight, Trump proved that America today is facing a huge gap between historical realities, legal and international structures, and even its European allies,” added Rouhani.

In the Name of Allah, the Most Beneficent, the Most Merciful

Hello and good night to the great, understanding Iranian nation. I would like to inform the great people of Iran, after the words of the current president of the United States was heard, that firstly, in the words of Mr Trump on Iran’s policy, there was nothing except insults and a pile of false accusations against the Iranian nation.

Apparently, he does not know that the US government set up a coup sixty-some years ago, and it was a power that overthrew the rule of law by making money and leveraging its mercenaries.

Apparently, he has forgotten that during the integrated campaign of the Iranian people against the dictatorship to gain freedom, independence and the Islamic Republic in this land, it was the United States that greatly supported the dictator of the time in Iran.

Apparently, he has forgotten that after the glorious victory of the Islamic Revolution and at the very earliest days, the US plot in Iran was a coup which, of course, was repeated once again in 1980.

Apparently, he has forgotten that in the eight-year defence of the Iranian nation against aggression, the United States backed the aggressor; he has forgotten the bombings of the cities of Iran, as well as the chemical bombardment of Sardasht and Halabcheh, when it was supposed to issue a statement against the aggressors, it acted exactly the opposite way. We should read the history better and more precise, to find out what they have done to the Iranian people in the past sixty-some years few years; how they treated the Iranian people during the 40 years after the revolution.

We should also study geography to find out how a president has not yet learned the name of the famous, historical and global Gulf: the Persian Gulf, which, unfortunately, the American warships are constantly coming and going. He should have at least asked his military advisors how they write the name of this Gulf in their maps. Therefore, they need to study geography more.

He has not apparently read international law. How can a president alone cancel a treaty that is a multilateral and in one sense, international document, as it has been approved in the United Nations? He apparently does not know that this is not a bilateral document between Iran and the United States, on which he can act in any way he likes.

Politeness and ethics are also important; false, defamatory lies and accusations against the great nation of Iran [is not accepted]- a great nation that, as tonight’s speaker came to the Persian Gulf region, attended the great elections in historic numbers. Is a nation and government, which is respectful of democracy and its culture and faith and has consistently respected all its international treaties and obligations, rebel? Or a government that has always been pursuing aggression and coups in this region and in the world, and has killed hundreds of thousands of people in different parts of the world from Vietnam to Latin America and in other countries with bombs? The country that claims to have stood against nuclear weapons, is the only country in the history of the world that has used nuclear weapons against a nation, not once, but twice. And today, it is threatening another country in the same region with nuclear weapons. Does a nuclear-armed country that has used nuclear weapons and also contributes to the development of nuclear weapons in countries that have close relations with it, such as the usurper Zionist Regime, want to take global actions against the proliferation of nuclear weapons?

In my opinion, once again it became clear to our people that the US government is a government that continues to its previous policies against the people of the region, against the Iranian people and against the oppressed peoples. The Iranian nation is not a nation that surrenders to a dictator by false statements and hate speech and the great nation of Iran has never surrendered to any power.

We explicitly state that we stand in the region against terrorism and we will continue to do so. The same terrorists that this man, in his last year’s presidential campaign, declared that the founder of ISIS was the US government itself.

Yes, the Revolutionary Guards, the Iranian people, the Iraqi people, the Syrian people, the people of Yemen, and the peoples of the region are standing up to the terrorist groups made by the United States – as Trump himself confessed- and they will not relinquish the fight until they are destroyed.

The Revolutionary Guards is a powerful force, and the Iranian people have always stood alongside the Revolutionary Guards and they confronted and resisted during the imposed war against the groups that you themselves provoked against the Iranian people, and it stood against the aggressors during the imposed war era, and today it has responded positively to the call of the oppressed people in the region and will continue to do so.

Is the Revolutionary Guards corrupt, or the government and armed forces that have always intervened in this region against the independence of nations? Is the Iranian government a dictator, a government whose elections are all governed by people’s vote, or governments that are backed by the United States and are still running their own countries by tribal ways, and have not once seen elections in their own countries? You are the supporter of the regime that oppressed the people of Palestine and Lebanon and other countries in the region, but you are using impolite words about a force that fights terrorism in the region and never aggresses any country.

Are you worried about Iranian missiles? How come you do not protest against those weapons you give to the aggressors every day and they target the innocent people of Yemen with your own planes and bombs? You acted against Iranian oil platforms and you have always conducted acts of aggression in the region. Our weapons and missiles are for our defence. We have always been determined to defend our country and we became more determined today. We have always tried to make the weapons that we needed, and we will continue to do more efforts later on. Our weapons are for defence, and we will continue to defend and strengthen our defences.

And our last word about the JCPOA as a multilateral and international treaty, in a sense, is that as long as our rights are guaranteed, and as long as our interests require and, as long as we enjoy its benefits, we will respect the JCPOA within the framework of the interests of our nation.

We cooperated with the International Atomic Energy Agency and within the framework of international treaties and the JCPOA and we will continue to do so, but if one day our interests are not guaranteed and the other parties want to violate their commitments, they must know that Iran will not hesitate a second and will respond to them.

What was heard today from US officials was nothing but the repetition of incorrect words, false accusations and insults that have been repeatedly said during the past 40 years. We were not surprised, since we are accustomed to these words of yours for 40 years. Our nation was not surprised, because it was expected of you, but you know that with your untrue words, you yourself made our nation more united. You cannot divide the people and the government, you are not able to divide the Iranian people and the great, popular Leader.

The basis of our revolution was based on the fact that religion is not separate from politics and the link between religion and politics is the Guardianship of the Islamic Jurist and the Supreme Leader, and the Iranian people respect and will respect its leader in accordance with the law and the constitution. The commands of the Leader are the commandments for the Iranian nation and the nation is united. All factions, groups, parties, tribes and religions will stand against the enemies of the Iranian nation and against you.

Are you sad about the slogan of the Iranian nation? Abandon your hostile policy. The people of Iran respect the American people, but they do not accept your aggressive policies. The slogan of the Iranian people is not against the country and people of the United States, but against the false and aggressive policies of the government United States. It is up to you to correct your policies and it is up to you to learn the right way of respecting nations.

If you do so, then the people of Iran will know well how to behave with you at that time.

Our nation, as always, stands against the conspirators. Their main goal is to keep us from economic growth, the goal of the US is to shy the world away from Iran and the JCPOA, and ultimately, to prevent investment and economic growth and economic prosperity. Despite the words of Trump and despite the ominous goals of American politicians, our nation will continue to work harder for economic growth, and will make the commands the Leader of Resistive Economy realised and operational.