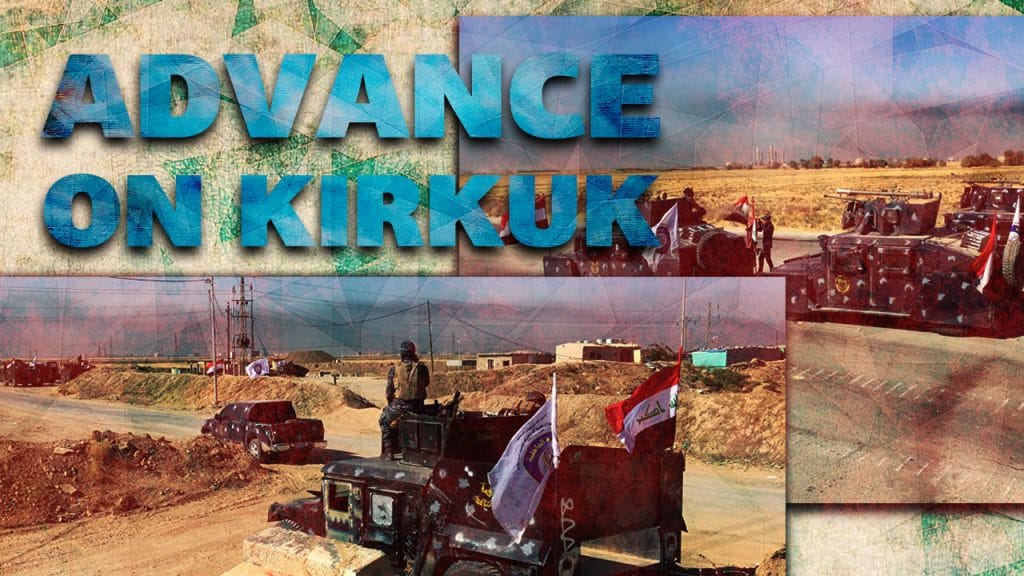 Late on October 15, Iraqi government forces launched a military operation to take back the area of Kirkuk from the Peshmerga, the military force of the Kurdistan Regional Government (KRG).

According to Iraqi sources, the 9th Armoured Division, the Federal Police and Iraqi Special Operations Forces, widely known as the Golden Division, entered Kirkuk city, K1 Airbase and the Khaled military camp as well as some oil fields in the city’s countryside.

The Kurdistan Region Security Council (KRSC) released a statement saying that the Popular Mobilization Units (PMU) are involved in the operation. The KRSC also claimed that the Peshmerga destroyed at least 5 Humvees belonging to the PMU.

On October 16, Lieutenant Colonel Salah el-Kinani, of the 9th Armoured Division, told Reuters that the objective of the army advance is to take control of the K1 Airbase.

Pro-Kurdish sources denied any gains by the government forces.

Earlier, the KRG-linked media claimed that PMU units deployed near Kirkuk are embedded with the Iranian Islamic Revolutionary Guard Corps (IRGC). Last Friday, the US designated the IRGC a terrorist group. So, KRG authorities may seek to gain more support from the US with these claims.

Formally, the multi-ethnic city of Kirkuk and its oil-rich countryside are not a part of the Kurdish autonomous region. However, KRG forces seized it in 2014 when Iraqi forces were facing setbacks in the war again ISIS. Now, the KRG clearly aims to include the area in a Kurdish state that it is seeking to proclaim using the September 25 independence referendum as a pretext.