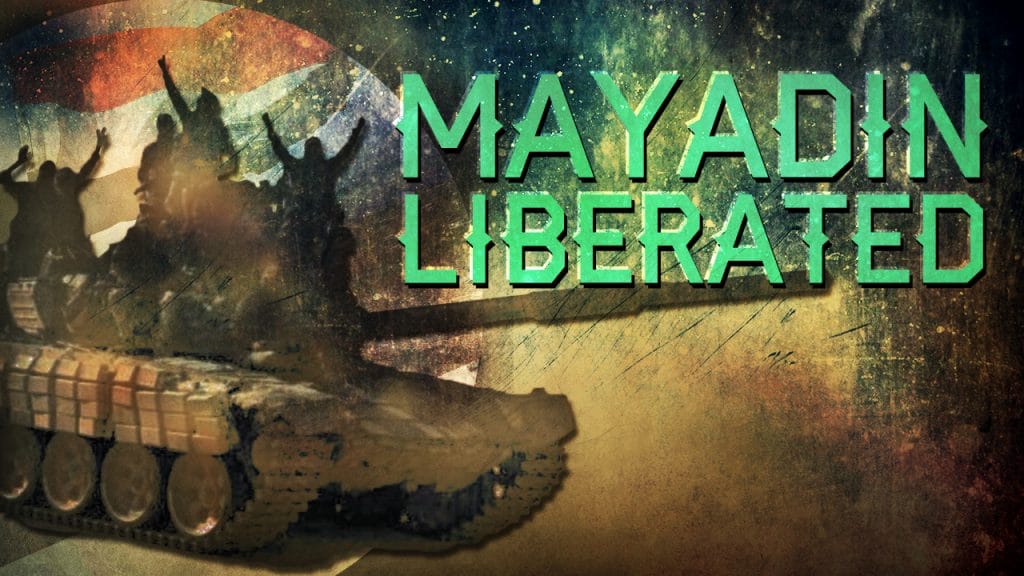 The Syrian Arab Army (SAA) Tiger Forces, supported by the Russian Aerospace Forces, have liberated the strategic city of Mayadin from ISIS terrorists in the province of Deir Ezzor. The SAA has also taken control of Buqrus Fawqani and Buqrus Tahtani northwest of the city.

Mayadin had been one of the key ISIS strongholds in the Euphrates Valley. Without it, the terrorist group has little chances to resist government troops securing the western bank of the Euphrates between Deir Ezzor and Mayadin.

According to pro-government sources, the SAA is now preparing to cross to the eastern bank of the Euphrates near Mayadin and to advance towards the Omar oil fields, which are also a target of the advance of the US-backed Syrian Democratic Forces (SDF).

Meanwhile, the SDF officially reached a deal with ISIS in Raqqah city. SDF spokesman Talal Selo, 275 Syrian ISIS fighters along with their family members left the city under the deal. According to another SDF spokesman, Mostafa Bali, “the final batch of fighters” left the city via buses overnight into October 15.

Selo added that “no more than 200-300” foreign ISIS members remained in Raqqah. They will not be allowed to evacuate.

Following the official statement, SDF-linked media changed the narrative saying that the SDF didn’t allow ISIS members to left the city and they will be interrogated and prosecuted. However, it is not clear if the media refers the evacuated group or another group of ISIS members that could surrender to the SDF.

On October 15, the SDF declared a final phase of its offensive in Raqqah and captured al-Barid district. According to pro_SDF experts, Raqqah will soon fall into the hands of the US-backed force.