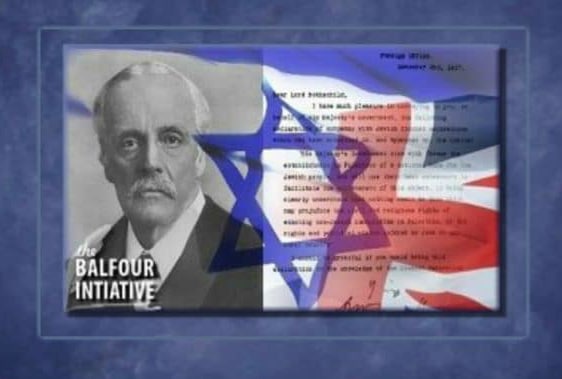 “Our vision to stage such a big event at the Royal Albert Hall is ambitious and we recognise our reliance on God to enable every aspect of it. The evening’s programme will follow the history of God’s work through the Balfour Declaration that culminated in the independence of the modern state of Israel. We will use dance, film, song and drama sketches to illustrate how God used both Christians and Jews to fulfil the prophesied return of the Jewish people from exile to their ancient biblical homeland Israel,” says the blurb.

And it adds: “Christian leaders will read statements that will reflect Christians’ desire to…

And the Royal Albert Hall, we are reminded, is where Lord Balfour celebrated with the Jewish community the granting to Britain of the Mandate for Palestine.

The rest of us of course remember Arthur Balfour as the Tory twit whose lamebrain ‘Declaration’ made it possible for Zionists who have no ancestral links to the Holy Land to dispossess, lock up and abuse Palestinians who do.

It was God’s work, we’re told. So that’s alright then. And while we recover our composure we may well ask what kind of warped Christians dreamed up this Albert Hall caper, how the Balfour Declaration and its sickening legacy could possible have been “God’s work”, and how many “godly men” were among the perpetrators.

Then let’s cut to another declaration — The Jerusalem Declaration on Christian Zionism, a joint statement by the heads of Palestinian Christian churches, which

Thankfully, a sermon recently delivered in Westminster Abbey by Michael Doe, Preacher of Gray’s Inn, added some important context missing from the Royal Albert Hall‘s promo patter: “The Balfour Declaration made way for the creation of Israel. It also said that nothing should be done ‘which may prejudice the civil and religious rights of existing non-Jewish communities in Palestine’. We British who made the Declaration have an unfinished responsibility to ensure its implementation.“

To be precise Balfour’s pedge said “it being clearly understood“ that nothing should be done to prejudice the rights of non-Jews. What’s not to understand? But that bit was conveniently forgotten within 30 years and is shrugged off today.

Who is behind this cringe-making celebration? Balfour 100. Who is behind Balfour 100? It’s hard to know. The Jewish Leadership Council’s website says that the Balfour 100 steering committee is comprised of 23 British-Jewish communal and Israel advocacy organisations but doesn’t name them. Among those, however, will be a number of fake Christians who are happy to stooge for the Zionists’ vile ambitions.

These pseuds have apparently ignored the cry for help issued only months ago by the National Coalition of Christian Organizations in Palestine to the World Council of Churches and the entire ecumenical movement. It was signed by over 30 organisations in Jerusalem, the West Bank and Gaza and can be read in full here.

They say: “We are still suffering from 100 years of injustice and oppression that were inflicted on the Palestinian people beginning with the unlawful Balfour declaration…. A hundred years later and there is still no justice! Discrimination and inequality, military occupation and systematic oppression are the rule…. Despite all the promises, endless summits, UN resolutions, religious and lay leader’s callings – Palestinians are still yearning for their freedom and independence, and seeking justice and equality.”

The Royal Albert Hall was built by Queen Victoria to commemorate her beloved husband and consort Prince Albert. I’ll wager the idea of the flag of a rogue foreign military power fluttering from this fine building, or displayed inside, would have both of them spinning in their marbled vault at Frogmore.

And if Theresa May accompanies her guest Bibi Netanyahu to the Albert Hall shindig she’ll hand him and his cruel regime a huge propaganda victory.