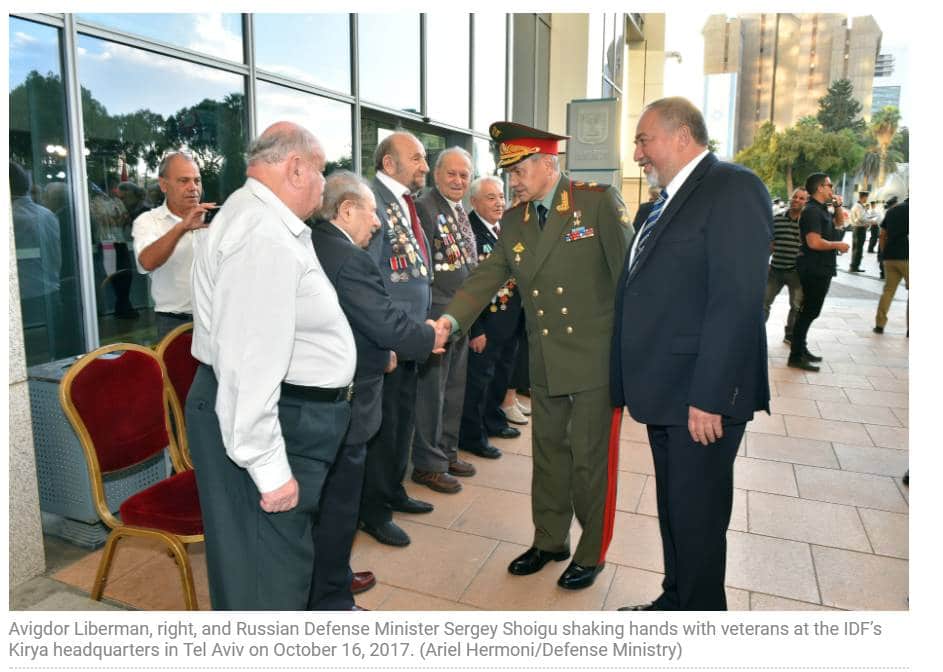 “The meeting mostly dealt with Iran’s attempt to establish itself militarily in Syria,” Netanyahu’s office said in a statement on Tuesday.

Their talks came after the Israeli military violated Syria’s territory and launched an air strike on an anti-aircraft battery in Syria in the vicinity of the Lebanese border on Monday. 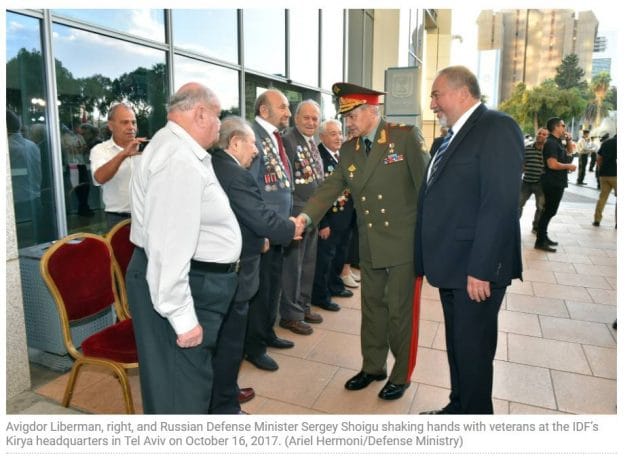 In response, the Syrian army targeted an intruding warplane and forced the fighter jets to retreat.

Both Iran and Russia are supporting the government of Syrian President Bashar al-Assad in its fight against terrorism. Iran has been providing military advisory support for the Syrian forces at the request of Damascus.

During the talks with the Russian foreign minister, Netanyahu also claimed that “Iran will have an arsenal of nuclear weapons within 8-10 years,” if Tehran’s nuclear deal with the world powers is not revised.

Netanyahu’s repeated opposition to the 2015 nuclear deal, known as the Joint Comprehensive Plan of Action (JCPOA), between Iran and the US, Britain, France, Germany, Russia and China, comes as US President Donald Trump announced on Friday that he would not certify Iran’s compliance with the agreement.

While Trump did not pull Washington out of the nuclear deal, he gave the US Congress 60 days to decide whether to reimpose economic sanctions against Tehran that were lifted under the pact. Reimposing sanctions would put the US at odds with other signatories to the accord and the European Union.

This is while the other signatories to the JCPOA, the EU and the International Atomic Energy Agency (IAEA) have unanimously confirmed Iran’s commitment to the deal and warned against the ramifications of Trump’s decision to abandon the landmark deal.

Iran says it will not agree to any revision of the nuclear deal.

Prime Minister Benjamin Netanyahu told Russian defense chief Sergei Shoigu on Tuesday that Israel will not tolerate the presence of Iran on its borders, his office said.

Netanyahu also repeated his view that without a renegotiation of the Iran nuclear deal, the Islamic Republic would be in possession of an atomic weapon within the next decade.

“Iran needs to understand that Israel will not allow it” to militarily entrench itself in Syria, Netanyahu said during the meeting. 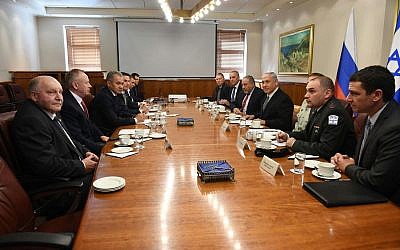 On his first day, Shoigu met separately with Liberman, who was joined by members of the IDF General Staff and officials from the Defense Ministry.

During the meeting, Shoigu told Liberman that Russia’s military operation in Syria is “nearing completion, and some issues need to be tackled immediately,” according to Russian state media.

The Russian defense minister said that included the countries’ military cooperation, as well as the overall fight against terrorism and the general situation in the Middle East.

“We will not get involved in internal matters in Syria,” Liberman told the Russian defense minister on Monday, “but, on the other hand, we will not allow Iran and Hezbollah to turn Syrian territory into a forward operating base against Israel.”

Liberman told Shoigu that Israel is “operating responsibly and with determination” in Syria.

“We will not allow the transfer of advanced weaponry by Iran through Syria to Lebanon,” he added.

Israel attributed great importance to Shoigu’s visit, his first since entering his position in 2012, and the first visit by a Russian defense minister to the Jewish state in many years.

“We greatly appreciate our relations with Russia,” he said. “We don’t always agree, but we always speak directly and openly. We believe that the moment there’s open dialogue, you can overcome all problems.”

Shoigu’s trip got off to a rocky start, coming hours after the IDF bombed an anti-aircraft battery belonging to Russia’s ally Syria after it had earlier fired an interceptor missile at an Israeli plane.

The Russian defense minister was greeted with an honor guard at the IDF’s Tel Aviv headquarters, known as the Kirya, where he also met briefly with World War II Red Army veterans who live in Israel.

“We greatly appreciate our memory of World War II. Many of our grandfathers and grandmothers fought in the ranks of the Red Army and we value the way Russia treats and remembers them today, and how [Russia] treats the memory of those who fought and died in the Second World War,” Liberman said.

After the honor guard, Shoigu and Liberman met privately in the latter’s office. They were then joined by IDF Chief of Staff Lt. Gen. Gadi Eisenkot, head of IDF Military Intelligence Maj. Gen. Herzl Halevi and the head of the powerful political-security affairs bureau of the Defense Ministry, Zohar Palti, as well as by members of the Russian defense minister’s entourage.

The discussion was focused primarily on Syria and the increasing influence of Iran and Shiite militias there, according to the Defense Ministry.

As the Syrian civil war appears to be coming to a close, Israel’s attention has increasingly turned to the threats posed by Syria’s other ally, Iran, which is believed to be establishing bases and military infrastructure near the Israeli border on the Golan Heights.

Israel has reportedly asked Russia and the United States to include in ceasefire agreements for the Syrian conflict an assurance that Iran-backed Shiite militias not be allowed within 60 kilometers (37 miles) of the border. However, according to reports, these requests have been denied.

While this is Shoigu’s first visit to Israel in his five years as defense minister, he has made multiple trips to Syria, including one earlier this month, as well as a surprise stop in Iran last year. 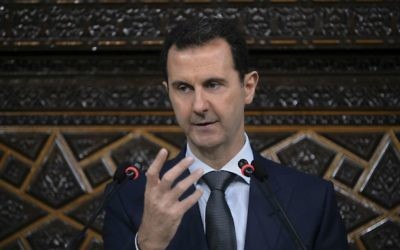 The soft-spoken defense minister is seen by many analysts as a driving force behind Russia’s aggressive support for Syrian dictator Bashar Assad.

The visit is a departure from recent years, which have seen Israeli leaders travel to Russia multiple times for diplomatic meetings, but almost no such sit-downs had taken place in Israel.

The rare meeting came on the heels of the brief exchange of fire between Israel and Syria on Monday morning.

Shortly before 9 a.m., the Syrian military launched an SA-5 anti-aircraft missile at Israeli reconnaissance planes, which it said had entered Syrian airspace from Lebanon. The IDF denied that its aircraft crossed the border, maintaining that they had been flying only over Lebanon, collecting intelligence.

According to the IDF, no Israeli planes were damaged by the interceptor, but the Syrian military said in a statement that it “directly hit” one of them.

The IDF said the battery was “incapacitated.”

As Russia maintains a heavy presence in Syria in order to assist its ally, Assad, an IDF spokesperson said the military informed Moscow of the impending attack on Assad’s army “in real time.”

The nearly three-hour delay between the initial attack on the Israeli aircraft and the retaliation was attributed by analysts to Israeli concerns about the potential problems that a reprisal could cause, coming so close to Shoigu’s visit.

Israel has repeatedly stated that it will act militarily in Syria if one of its “red lines” is violated, notably the transfer of advanced weaponry to Hezbollah or, in this case, a direct attack on Israeli aircraft. 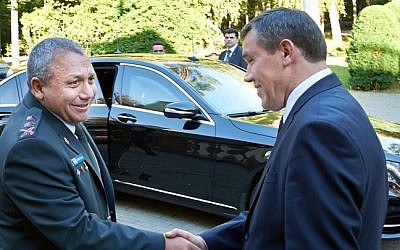 In order to avoid friction and accidental conflict, for the past two years Israel and Russia have coordinated their military efforts in Syria.

Israeli officials do not generally discuss the full extent of that coordination, but they stress that the Israeli military does not seek Russian permission before carrying out operations.