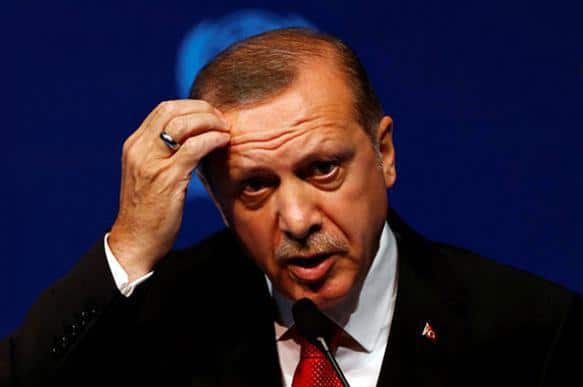 Turkish President Recep Erdogan suffers from sleep deprivation. This became apparent in Kiev, during his joint press conference with Petro Poroshenko. There are a few reasons, which may make the Turkish leader give way to depression.

The whole world has seen the video of the Turkish president yawning, closing his eyes and taking  a nap while his Ukrainian counterpart was delivering a boring speech about Ukraine’s achievements. When Poroshenko noticed Ergodan falling asleep, he “incidentally” tapped the palm of his hand on the table to wake the Turkish president up.

Psychologists said that Erdogan’s tired face and drowsiness at the press conference indicated his depression. There are a few huge reasons, for which the Turkish leader may feel depressed and sleepy.

Turkey’s relationship with EU leader state – Germany – has deteriorated to the level of no communication between Erdogan and Chancellor Angela Merkel. Now it is the turn to burn bridges with Washington.

Last week, the USA announced humiliating visa sanctions for Ankara. The USA stopped issuing non-immigrant visas to Turkish citizens after the Turkish authorities arrested a member of the consulate, Turkish citizen Metin Topuz. He was accused of involvement in last year’s attempted military coup in Turkey, which, according to the investigation, was led by Erdogan’s sworn enemy Fethullah Gülen, who is hiding in the US. Turkey responded symmetrically to the United States and stopped issuing this category of visas to the Americans.

We can see the visa war in full swing between the US and Turkey. Erdogan said in his characteristic emotional manner that he refused to recognize the authority of US Ambassador to Ankara, John Bass, as he could no longer consider him a representative of the United States in Turkey.

Needless to say that such an emotional statement from the head of Turkey did not find any support in the White House, taking into consideration the fact that during Erdogan’s recent visit to the USA the two leaders spared no compliments to the fraternal peoples of the USA and Turkey.

During his recent visit to Kiev, the Turkish leader made another mistake. Recep Erdogan publicly condemned Russia’s “annextion of the Crimea” and said that Ankara would never recognize the Crimea as part of Russia. It’s no secret for anyone in the Kremlin that Turkey declared in the spring of 2014 that it would not recognize the Crimea as a Russian territory.

Nevertheless, Ankara could have showed some sensitivity not to declare its position on the Crimea in a manner that Russia found offensive. Following Erdogan’s statement in Ukraine, Russian MPs and policy-makers said that Russia should not trust Erdogan’s statements about his dedication to friendship with Russia.

After coming to power in Turkey in 2002 and becoming the country’s full-fledged ruler, Recep Erdogan has never learned the rules of international diplomacy. His impulsiveness and emotionality have turned him into an outcast in the eyes of two leading countries of the Group of Seven. Apparently, this is only the beginning.