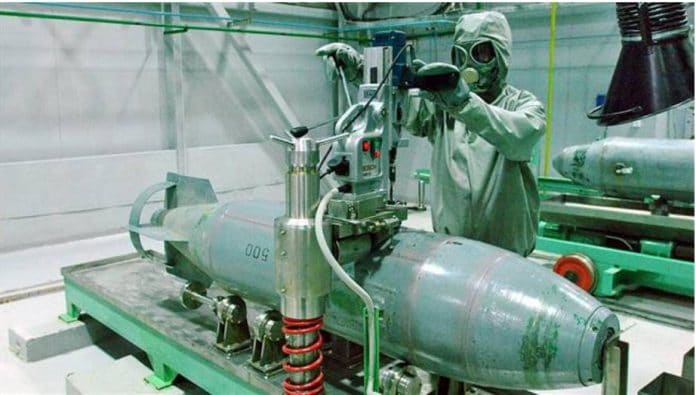 An employee wears a gas mask and suit as he works at the chemical air weapons destruction facility at the Settlement of Maradykovo, Kirov Region, Russia. (Photo by TASS)

After destroying the remainder of its chemical weapons in September, Russia is now calling on the United States and other countries in possession of such weapons to immediately “follow suit” and do away with their stockpiles.

Speaking at a meeting of the First Committee of the UN General Assembly on Wednesday, Deputy Director of the Russian Foreign Ministry’s Department for Nonproliferation and Arms Control Vladimir Yermakov blasted the US for undermining the international treaties banning chemical weapons.

“We call on all other countries still possessing chemical weapons to follow Russia’s lead without delay,” he said. “That concerns, first and foremost, the country that initiated the convention, which has always been the most active proponent of its ideas when it came to other countries and now, for some reason, it continues to be the largest possessor of chemical weapons.”

Russia and the US are both parties to the Chemical Weapons Convention (CWC), which originally required them to get rid of their stockpiles by 2007 with a potential extension until 2012, a deadline they missed.

Yermakov hailed as “historic” Moscow’s elimination of its stockpiles and called for the event to be enshrined in a relative UN resolution.

Russian President Vladimir Putin hails his country’s destruction of its last supplies of chemical weapons, accusing the US of failing to fulfill its own obligations in this regard.

“You know that we inherited the world’s largest arsenal of this type of weapons of mass destruction, and we have coped with the task of eliminating it in a worthy manner, thereby once again reiterating Russia’s commitment to strict observance of its obligations under international treaties,” the diplomat said.

Moscow signed the CWC in 1993 and ratified it four years later, declaring at the time that it had 40,000 tonnes of chemical weapons.

After Russia destroyed its last weapon on September 27, inspectors from the Organization for the Prohibition of Chemical Weapons (OPCW) officially confirmed that the country had fully eliminated its stockpiles.

“We expect this to be properly reflected in the resolution of the current session of the UN General Assembly on the Chemical Weapons Convention,” Yermakov said.

Robert Wood, the US Permanent Representative to the Geneva Conference on Disarmament, said the US was committed to destroying its chemical stocks by 2023.

File photo shows Russian army officers inspecting the condition of the barrels of chemical agents in storage at a military base. (Photo by Reuters)The official also noted that Washington had helped Moscow by allocating $1 billion to its chemical weapons elimination program.

According to the US Arms Control Association (ACA), to date, the US has eliminated nearly 90 percent of its stockpiles of chemical warfare agents, or about 28,000 tonnes.