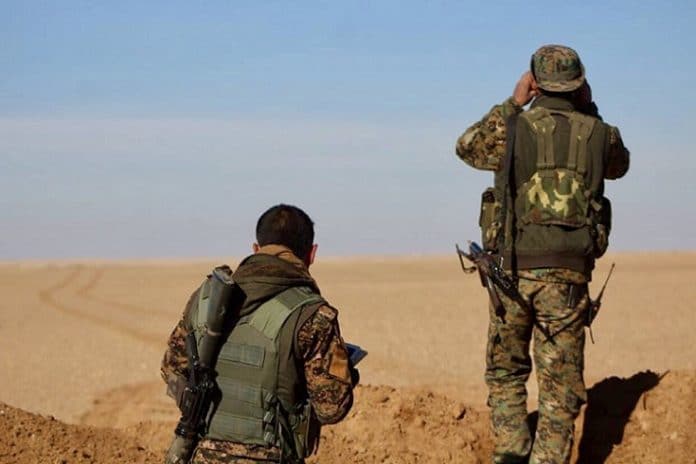 “The beginning of the end or the end of the beginning, the Middle East war enters a new phase”… Gordon Duff

Most of us who have watched the SAA crawl back from the edge of defeat, after the Russians joined the Hezbollah and Iranian forces already there, have cheered their westward advance to recapture the huge central area of the country under ISIS control.

When VT traveled to Syria in the fall of 2015, where one of the briefings was on the ISIS complete order of battle, we could never have foreseen what has taken place.

We later saw Palmyra recaptured, only to be lost again after an assault with ISIS foreign allies’ major involvement, and then recaptured. We worried as Damascus supply lines got stretched further and further, which invited the inevitable supply-line attacks to slow down the SAA advance upon ISIS’s Euphrates river bastion.

The well-executed combined operations attacks broke the ISIS siege of the airport, and Deir-Ezzor was put under siege. But then their momentum lost its steam, as the SAA force was divided into multiple combat operations with units bled off for supply line security; others headed north to hook up with the hard-fighting Syrian units that had gotten bogged down at Madan, where the eastern flowing Euphrates turns southwest. Damascus made a strategic decision to secure all of the western Euphrates north of Deir-Ezzor first, and that move will be debated long after the war is over.

Another SAA force was tasked with widening the airport perimeter to a distance outside mortar and rocket barrage so it could become a tactical combat base for critically needed supplies and helicopter operations.

But despite all of the success from the bombing of ISIS command centers and ammo dumps, the Syrian offensive stalled, with the battle lines around the ISIS-held part of the city being static for a month, while the Kurdish SDF swept down from the north to confiscate Arab tribal lands and oil.

The SAA divides its forces and loses its punching power

What happened? With ISIS reeling after its defenses were penetrated, why wasn’t the city rolled up faster to avoid getting caught in a drawn-out siege? The answer was both obvious, and then not.

Getting control of one of the main bridges over the river does not seem to have been woven into the plan, when getting major forces over the river was critical to not only having ISIS cut off from supplies and the ability to maneuver; but the SAA was not able to get across to block the SDF in time to prevent losing the rich oilfields east of the city.

ISIS held fast inside the city, taking advantage of its civilian human shield, seemingly tasked with the classic “hold at all costs” order to prevent the SAA from getting into a position to attack southward down the river from both sides, toward Al-Bakumal on the Iraq border.

That is the key prize for the road link there, where Iranian supplies and Iraqi troops could combine to roll up ISIS and the Kurdish SDF from the Arab border area and send the Kurds back where they came from, with the American coalition in tow. The US coalition now claims that it has no combat plans after Raqqa, a poor joke as the SDF is very active in the Syrian Arab oilfields east of the Euphrates.

The pontoon bridge effort was too little and too late

We watched in slow motion horror as the pontoon bridges were brought up, but then not quickly put to use. And when they were, the transportation capacity was not enough to supply a sustained advance. Syrian troops got over the river, only to get bogged down fighting ISIS, and then having to watch on their drone TV screens the SDF grabbing all the oilfields, with the Kurdish command stating that it had no intention of ever giving them up with big brother USA backing them up.

Week after week went by with the tough ISIS holdouts buying their comrades down river enough time to plan a major multi-pronged attack on the Palmyra highway, one that came close to recapturing Sukhnah.

A major diversion attack was made in Hama province to draw critically needed forces away from the Deir Ezzor front, which was followed by the supply line attacks. Those were dealt with, and the SAA rebounded with its own surprise move by attacking southward down the Euphrates to Al-Mayadin.

The attack did not slug its way south along the main road, but swung out into the desert down to the outskirts of Mayadin, the home of a major two-lane bridge. Reports indicated that the ISIS supply-line attacks on the Palmyra road has used up much of its defensive power to where ISIS might not be able to mount a siege defense, and the SAA could finally have a big bridge.

The SAA took Mayadin more quickly than expected, with an envelopment attack to stretch out ISIS defenses. We learned that ISIS only had enough manpower for one line of defense, and when that was broken, the jihadis fled, leaving house weapons and ammo dumps intact, but with both spans of the two-lane bridge blown. Syrian troops U-turned and quickly cleared all of the western Euphrates back to Deir-Ezzor.

The big question now is can the SAA capture an intact bridge to get armored forces over the river to drive the SDF out of the area, clear ISIS, and secure as much of the Iraqi border as possible, which is very important for both Syria’s and Iraq’s future security. There is a bridge a bit further south at Al-Asharah. But every mile the SAA advances, the longer it takes to get supplies to its troops.

The Syrian battlefield is still in a state of flux despite the Russian air command predicting the demise of the last ISIS held positions. The Raqqa battle is almost finished, but troops have already been bleed off from that fight as the perimeter shrank. The US has bombed the city to almost total destruction, keeping the usual drone over flight video footage off the airwaves.

Turkey has already started a new proxy war by sending a modest armored force into Idlib province, and then hired out the fighting with the HTS jihadis to Free Syrian Army mercenaries. It looks like Erdogan is going to get his Syrian buffer zone on the cheap, while he saves his military for possible use in Iraq if a Kurdish civil war explodes in the country.

Israel is now telling Damascus it cannot have any counter-terrorism or military allies that Netanyahu does not approve of, namely Iran, and tells this to the world when Russian Defense Minister Shoygú is visiting.

Will the Syrian Kurds replace ISIS as the biggest threat to Syrian peace?

While ISIS might soon be defeated, its sleeper cells will remain, and the SDF Kurds will now be the major party holding “Syrian territory”, the traditional Arab lands they have captured and openly said they plan to integrate into their new state.

Over in Iraq, Barzani and the Peshmerga had thought they had already done that with Kirkuk, but had to retreat in front of Iraqi forces, as the US chose not to intercede on their behalf, a wise decision. Will we see a repeat of that scenario in Syria? Will the US coalition continue flying air support to help the SDF defend its captured Syrian-Arab lands?

Who should pay for the state-sponsored terrorism?

Will Syria go after reparations, as VT has long suggested to them, from all the countries that supported the proxy terror war on its government and civilians, including the US, Saudi Arabia, and even Turkey?

We were thinking not only for the Syrian beneficiaries, but all those in the future who will likewise be devastated via state-sponsored terrorism because there are no effective penalties against it, something like putting a $10 per barrel export tax on Saudi oil for the Syrian people for the 25 years it will take to rebuild the country.

Winning, or I should say surviving, the Syrian war will be a bittersweet victory if the guilty walk away sneering, “I’ll just get you the next time”. What is the use of the UN and the international courts if state-sponsored terrorism becomes a sovereign immunity-protected crime against humanity?

If any of us are ever to have any security, we have to face this problem and deal with it no matter what the cost, because the cost of losing will be even worse. Just ask the people of Mosul and Aleppo, where even the dead cry out for justice.