The assertion was made in the latest Syria travel warning issued by the State Department on Wednesday. It also mentions Islamic State [IS, formerly ISIS/ISIL]. 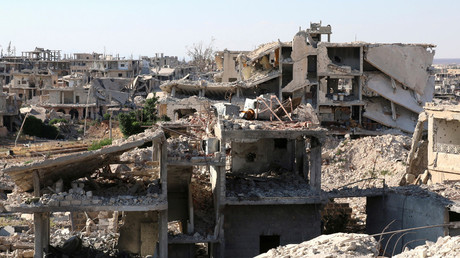 “Tactics of ISIS, Hayat Tahrir al-Sham, and other violent extremist groups include the use of suicide bombers, kidnapping, small and heavy arms, improvised explosive devices, and chemical weapons,” it said.

Meanwhile, Russia’s Defense Ministry said a precedent had been set by Washington acknowledging that Al-Nusra linked terrorists use chemical weapons in Syria.

“This is the first official recognition by the State Department not only of the presence, but the very use of chemical weapons by Al-Nusra terrorists to carry out terrorist attacks, which we repeatedly warned about,” General Igor Konashenkov, spokesman for the ministry, commented on Friday.

Previously, the US military reported chemical attacks in Syria.  Last November, Colonel John Dorrian, a spokesman for the US-led coalition in Iraq, said it is “concerned about Islamic State’s use of chemical weapons.”

“[Islamic State] has used them in Iraq and Syria in the past, and we expect them to continue employing these types of weapons,” Dorrian said in an emailed statement to the New York Times.

The military official said the terrorist group’s ability to stage chemical attacks is “rudimentary,” adding that US, Iraqi and other coalition forces are capable of dealing with the impact of these attacks, namely “rockets, mortar shells or artillery shells filled with chemical agents.”

Earlier in April, the US launched 59 Tomahawk missiles at the Syrian military’s airbase Shayrat in response to an alleged chemical attack in Syria’s Idlib Province, where dozens of civilians including children died from suspected gas poisoning in the rebel-occupied territory. Washington was prompt to point the finger at the Syrian government for the incident.

READ MORE: Experts should be sent to Syrian airbase attacked by US to carry out chemical probe – Russian MoD

“There is a Joint Investigative Mechanism [JIM], established in 2015 by the UN and the Organization for Prohibition of Chemical Weapons, to find those behind [the use of chemical weapons in Syria],” Mikhail Ulyanov, director of Russian Foreign Ministry’s Non-Proliferation and Arms Control Department, told TASS.

He said the Joint Mechanism’s experts have visited Shayrat airfield on October 8 and 9, but did not collect ground samples at the site.

“The JIM are categorically refusing to carry out this important function,” the diplomat said, adding, “we can’t say this investigation is of any quality… this is an unprofessional approach that raises huge questions.”