The date was Oct. 21 in 1967.  Demonstrators including radicals, liberals, black nationalists, hippies, professors, women’s groups, and war veterans marched on the Pentagon.

The rally in front of the Lincoln Memorial started peacefully, though Dr. Benjamin Spock—baby specialist, author, and outspoken critic of the war—did call President Johnson “the enemy.” After the rally, the demonstrators, many waving the red, blue, and gold flag of the Viet Cong, began marching toward the Pentagon. Violence erupted when the more radical element of the demonstrators clashed with the soldiers and U.S. Marshals protecting the Pentagon. 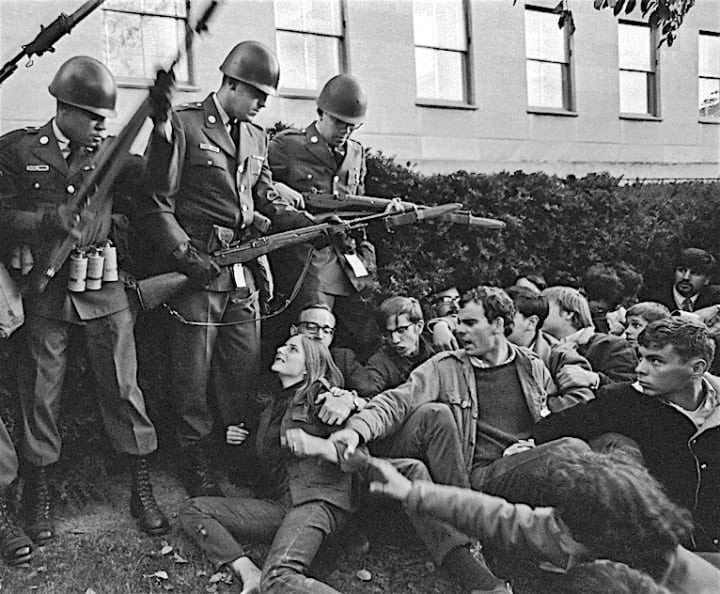 The protesters surrounded and besieged the military nerve center until the early hours of October 23. By the time order was restored, 683 people, including novelist Norman Mailer and two United Press International reporters, had been arrested.

This protest was paralleled by demonstrations in Japan and Western Europe, the most violent of which occurred outside the U.S. Embassy in London when 3,000 demonstrators attempted to storm the building.

The Vietnam War (1955-1975):   also known as the Second Indochina War, and known in Vietnam as the Resistance War Against America or simply the American War, was a war that occurred in Vietnam, Laos, and Cambodia from 1 November 1955 to the fall of Saigon on 30 April 1975.

It was the second of the Indochina Wars and was officially fought between North Vietnam and the government of South Vietnam. The North Vietnamese army was supported by the Soviet Union, China and other communist allies and the South Vietnamese army was supported by the United States, South Korea, Australia, Thailand and other anti-communist allies. The war is therefore considered a Cold War-era proxy war.

58,220 Americans died in the Vietnam War.  Many say the protesters at home helped end the war by putting pressure on politicians.  The war was lost by the USA.