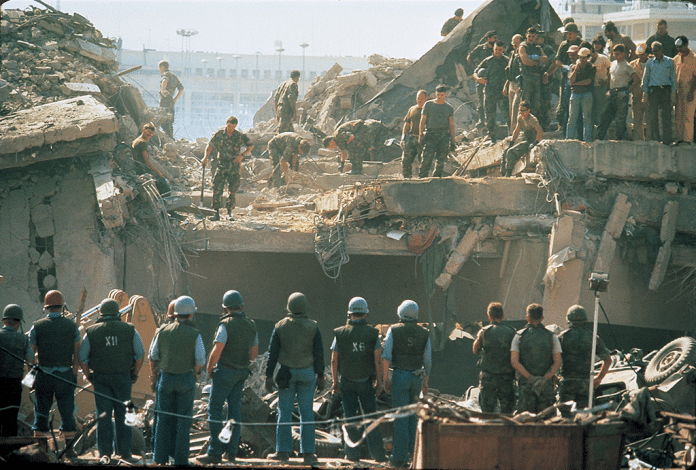 On this October 23rd day in 1983, a suicide bomber drives a truck filled with 2,000 pounds of explosives into a U.S. Marine Corps barracks at the Beirut International Airport. The explosion killed 220 Marines, 18 sailors and three soldiers.

A few minutes after that bomb went off, a second bomber drove into the basement of the nearby French paratroopers’ barracks, killing 58 more people. Four months after the bombing, American forces left Lebanon without retaliating.

The Marines in Beirut were part of a multinational peacekeeping force that was trying to broker a truce between warring Christian and Muslim Lebanese factions. In 1981, American troops had supervised the withdrawal of the Palestine Liberation Organization (PLO) from Beirut and then had withdrawn themselves. 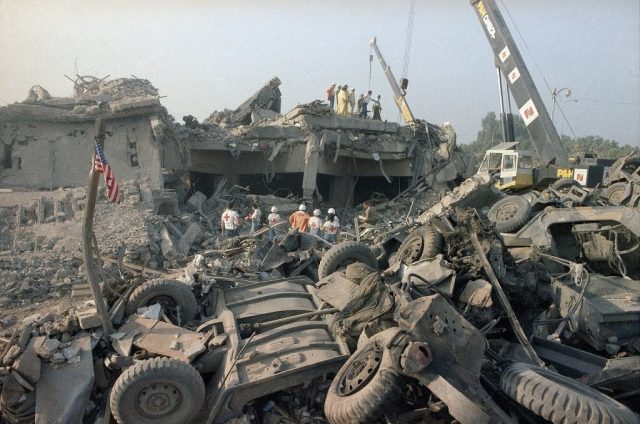 They returned the next year, after Israel’s Lebanese allies slaughtered nearly 1,000 unarmed Palestinian civilian refugees. Eighteen hundred Marine peacekeepers moved into an old Israeli Army barracks near the airport—a fortress with two-foot–thick walls that could, it seemed, withstand anything. Even after a van bomb killed 46 people at the U.S. Embassy in April, the American troops maintained their non-martial stance: their perimeter fence remained relatively unfortified, for instance and their sentries’ weapons were unloaded.

At about 6:20 in the morning on October 23, 1983, a yellow Mercedes truck charged through the barbed-wire fence around the American compound and plowed past two guard stations. It drove straight into the barracks and exploded. Eyewitnesses said that the force of the blast caused the entire building to float up above the ground for a moment before it pancaked down in a cloud of pulverized concrete and human remains. FBI investigators said that it was the largest non-nuclear explosion since World War II and certainly the most powerful car bomb ever detonated. 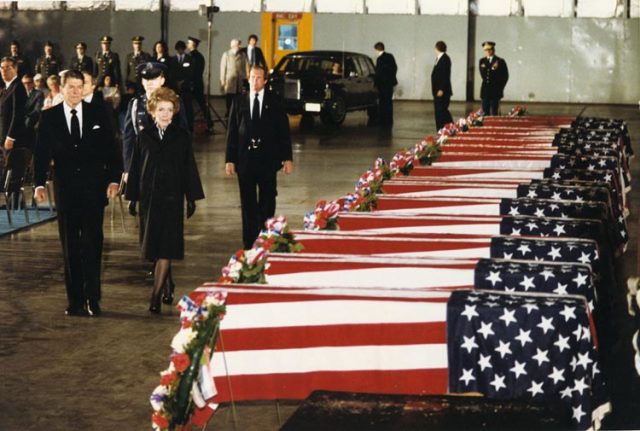 After the bombing, President Ronald Reagan expressed outrage at the “despicable act” and vowed that American forces would stay in Beirut until they could forge a lasting peace. In the meantime, he devised a plan to bomb the Hezbollah training camp in Baalbek, Lebanon, where intelligence agents thought the attack had been planned. However, Defense Secretary Caspar Weinberger aborted the mission, reportedly because he did not want to strain relations with oil-producing Arab nations. The next February, American troops withdrew from Lebanon altogether.

The first real car bomb—or, in this case, horse-drawn-wagon bomb—exploded on September 16, 1920 outside the J.P. Morgan Company’s offices in New York City’s financial district. Italian anarchist Mario Buda had planted it there, hoping to kill Morgan himself; as it happened, the robber baron was out of town, but 40 other people died (and about 200 were wounded) in the blast.

There were occasional car-bomb attacks after that—most notably in Saigon in 1952, Algiers in 1962, and Palermo in 1963—but vehicle weapons remained relatively uncommon until the 1970s and 80s, when they became the terrifying trademark of groups like the Irish Republican Army and Hezbollah.

In 1995, right-wing terrorists Timothy McVeigh and Terry Nichols used a bomb hidden in a Ryder truck to blow up the Alfred P. Murrah Federal Building in Oklahoma City.