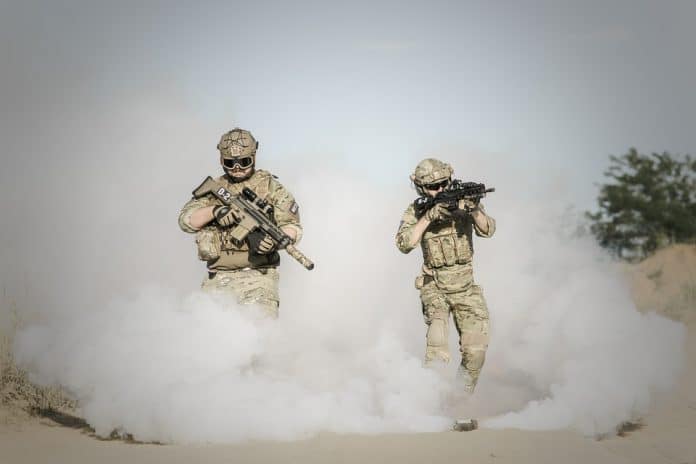 The Freedom Series by BraveHeart

There are many names by which Boogie Man Terrorists have been labeled; “The Others”, “Savages,” ”Enemies”(Latin meaning “not friend”), “Evil” (identifying people as believing in and/or worshiping a “False God”), “Terrorists,” or any bigoted or derogatory name used to paint another person in a negative light or justifiably murder them in war. This psychological tactic of negatively labeling another person or group of people as different and dangerous has long been the weapon of choice by the wealthy, religious leaders and oligarch’s who are in control of either the government, mass media and/or major industries.

This authoritative power of naming and controlling the story narrative is the lever of influence that manipulates “Group Thought” so as to herd the masses (the pawns of given society who naively support and/or bend to the rule of the elite who define themselves as ordained and righteous leaders), to take up violent or military actions against any named “Boogie Man.”

The labeling of others as the personification of evil itself and the elite’s false story narratives serve to hide, in plain sight, a strategy of deception used to enroll a society to tactically battle and go to war on behalf of the ruling class. The end goal of the elite or New World Order (NWO) is to usurp from any sovereign entity (person, government or country) a desired and valued geopolitical chest board piece such as, strategic land territories, water, agriculture territories or produce, precious minerals and/or human labor (slaves). The result of such labeling and usurping actions always results in oppression, genocide and colonialism.

The horrors of such philosophies and actions trace back to the “Doctrine of Discovery” issued by Pope Alexander VI in 1493. This doctrine, in essence, described the protocols by which Christian explorers were to conduct themselves when landing on foreign land/soil. The rules were as follows: 1) if occupied by fellow Christians they were to leave the land in their procession or equitably divide the land. 2) If not occupied by anyone. Dibs it’s yours to claim. 3) If occupied by non-Christians two choices: murder or enslave the people.

The Doctrine of Discovery, Manifest Destiny, Colonialism, We’re THE CHOSEN ONES, We found THE WAY… is the implied foundation from which all manner of horrors are justifiably inflicted on others. Laughably, this mentality is light years away from the Star trek Prime Directive principles of the imagined Federation: “Relative to all civilizations which are below a certain threshold of technological, scientific and cultural development; Starship crews are prevented from using their superior technology to impose their own values or ideals on them.”

In America, the land of the free and home of the brave, Christian Pilgrims who landed on the foreign soil of North American, were saved by the survival training of the Native Americans. Not soon thereafter the civilized Christians would express their gratitude (we annually celebrate “Thanksgiving” to commemorate this) by invading and colonizing America under what was now to be called “Manifest Destiny,” their version of the Pope’s “Doctrine of Discovery. This doctrine which translated into “We’re the Chosen Ones and You aren’t” justifiably guided the White Man to commit a monstrous genocide on some 60 million Native American people.

These people, naturalized to North American, were no match for combination of psychological and technologic savagery that would be unleashed on them as a means of methodically exterminating and/or then relegated the survivors to the “Concentration Camps,” later and presently call “Reservations.” The Native Americans who naturally resisted and fought back against our invasion and territorial genocide were labeled and demonized as “Savages,” a means of downgrading and defining them as a group of subhuman people so as to justifiably inflict inhuman treatment of them…be-headings and worst were common. It’s unconscionable to ever imagine labeling the Native Americans, a people who sacredly honored all living creatures and nature itself as “Holy,” as Savages.

Respectively, religious doctrines of superiority always precede a rationalized indifference towards people who are defined to be “The Others” and/or occupy landmasses that are discovered to possess strategic resources that a militarized and colonizing power deem profitable. Britain, Spain, France. Belgium and the United States have all played lead roles in colonizing other countries for such purposes. To date the U.S. maintains almost 1000 military bases worldwide. The Super Power of Russia, interestingly enough, maintains 5 military bases worldwide, four of which reside in the former USSR.

Today we see how some people, who act like annihilating Alien Invaders, have the audacity to believe and call themselves ‘The Chosen Ones,’ and refer to “Others” and/or “Gentiles” as “Goyim,” (a term meaning “Cattle”), continue to justifiably colonize and build settlements within Palestinian territorial land and treat Palestinian men, women and children with a monstrous indifference and cruelty, likened to how we once treated the Native Americans. Relative to dominating countries pilfering the natural resources of militarily weaker countries, it’s probably a coincident that Gaza sits on some one and half trillion metric feet of natural gas (worth a fortune) and that Palestine in general sits on the largest water aquifers in the region. Foreign exploiters want this Natural gas and Israel expressly prohibits the Palestinians from accessing and using their own water resources. Unfortunately, this is not a joke.

PSYOP and False Flag operations are a tactical means and extension by which others are labels as enemies or boogieman. As described in my previous article and for those unfamiliar with the term PSYOP “Psychological Operations (PSYOP), it means: “a plan to convey selected information and indicators to audiences to influence their emotions, motives, and objective reasoning, and ultimately the behavior of governments, organizations, groups, and individuals.”

In truth, the 9/11 event ultimately served as a massive PSYOPs and False Flag Operation to camouflage the beginning of the US’s and NWO’s plans to create a broad scale rebranding campaign of non- cooperating Middle East countries like Libya, Iraq, Syria and Iran (countries done with being forced to use the US Petro dollar and the Central Banking Systems, ultimately controlled by the NWO worldwide banking cartel) as being defined as the new “Axis of Evil.”

This, in turn, was used to establish and justify a US lead military operation that would initiate and force regime changes. The NWO and controlling elite understand that once someone or something is defined as evil it is de facto deemed as dangerous and threatening. The controlling elite use the psychological foundation of the fight or flight survival mechanism to trigger Pavlovian, Archetypal and religious reactions within the Group Thought of Pawns to righteously provoke them into a protection and fight mode to ensure safety.

This insane psychological paradigm of dysfunctional reasoning works like this: I believe in the Right God and therefore, you, “the Other,” don’t. Therefore, I must be Good and you, ‘”the Other,” must be Bad. Therefore, I must be Righteous and you, “the Other,” must be Evil. Once “the Other” is defined as “Evil” the Righteous Ones (“We’re the Chosen Ones,” or “We found THE WAY (rather than A WAY…etc.) can justifiably go into villages and murder men, rape women, kill babies and then burn down or blowup villages to the ground…all in the name of God.

Afterwards Righteous soldiers victoriously return home as heroes and sleep like babies believing they followed the instructions of the “Right God”. This is of course until the Combating or Returning Soldiers finally reads between the lines of the lies and awakens from the spell of the propaganda mantras that enrolled them to battle an enemy. At this point the soldier reflects within where both their heart and soul reveals the truth and consequences of their deeds. At this moment and forward, the soldier, who has followed the orders of the insane and compromised, becomes forever haunted by the mirror of their good conscience. They now witness the shell of their soul as being filled hatred and insanity. This fractured mental state leads to a self- induced Schizophrenia that we know and now call “Post-Traumatic Stress Disorder” (PTSD).

With a long history of “evil labeling campaigns” the US lead the charge of blaming, scapegoating and vilifying Saddam Hussein and Iraq for the 9/11 event. Regardless of the facts that neither he, or his country, had zero involvement with the event there was a planned invasion in motion and it had to be justified to the American public. The US Government and its military figureheads (lead by a compromised Four Star General named Colin Powell) along with the mainstream media lackeys proceeded to lie about Hussein having and preparing to use weapons of mass destruction.

All this compounding rhetoric was strategically used to create, what was thought to be, a series of unimpeachable lies that would serve as a psychologically foil to enroll the US public in supporting a retaliatory military response to cover-up and accomplish multiple strategic agendas:

The US and its people were sold another major lie and lead into the war by the story of a 15-year-old Kuwaiti girl only known by and named “Nayirah.” There, before the US Congressional caucus on Human Rights, Nayirah testified that “Iraqi soldiers had removed scores of babies from incubators and left them to die.” Nayirah’s story, later discovered to be a fabricated lie also revealed that she was actually the daughter of Saud Nasir al-Sabah, Kuwait’s Ambassador to the United States and Canada.

Later it was discovered that the Washington D.C PR firm of Hill & Knowlton had coached Nayirah to deliver a propaganda lie. Later it was coincidently found that Mr. Lantos and Mr. Porter, who headed the Congressional Human Rights Foundation, rented space from Hill & Knowlton’s Washington DC headquarters at a reduced rate. The same Citizens for a Free Kuwait, who produced the mysterious Nayirah also gave $50,000 to the foundation sometime after Iraq’s invasion of Kuwait. The foundation has financed caucus travel, including trips by Mr. Lantos and his wife” according to the January 15, 1992 article in the New York Times.

Towards better understanding how the US and other Governments use combinations of PSYOP/False Flag operations and militarily trained and equipping civilian Police forces to steer an unwilling and nonconforming public who understand and pushback against manipulative lies and the restrictive legislative laws that follow please consider Part 5 in my series of articles: “Police Brutality Against It’s Citizens.”