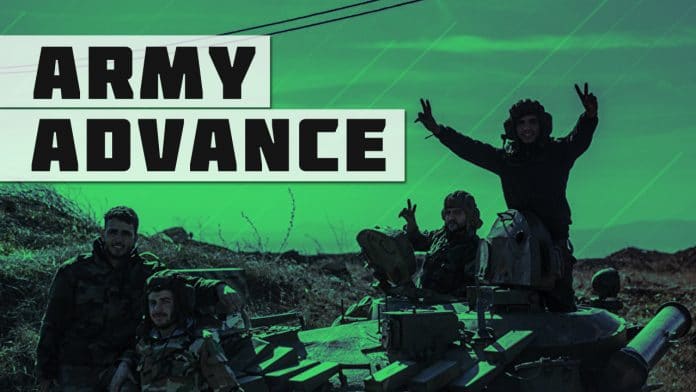 Last night, an airstrike hit the government-held neighborhood of al-Qusour in Deir Ezzor city killing at least 14 people and wounding 32 others. Pro-opposition sources say that the incident is a result of mistake by the Syrian or Russian air power. According to pro-government sources, the airstrike was conducted by the US-led coalition as a warning to the Syrian government amid the ongoing tensions east of Deir Ezzor.

The Syrian Arab Army (SAA) and the National Defense Forces (NDF) have secured the village of Tabiyah on the eastern bank of the Euphrates and advanced on al-Ashrah on the river’s western bank. An intense fighting is now ongoing in the village.

Some pro-government sources have already claimed that al-Ashrah is under control of the SAA. But this is not confirmed yet.

An intense fighting erupted in the T2 Pumping Station area near the border with Iraq. The SAA and Hezbollah advanced on ISIS positions in another attempt to recapture this strategic site from the terrorist group.

Government troops killed up to 10 ISIS members and destroyed 2 vehicles in the clashes. ISIS claimed that it destroyed a battle tank and two vehicles of the SAA.

The Kurdish-dominated Syrian Democratic Forces (SDF) have still not been able to provide any photos or videos from the Omar oil fields area and nearby points that were seized by the US-backed force on October 22.

Meanwhile, according to pro-Kurdish sources, the SDF is preparing to push further towards the border with Iraq, capturing the remaining oil and gas infrastructure along the Euphrates.

On October 23, the second Turkish military convoy entered Syria’s Idlib province. According to local sources, the convoy was consisting of up 50 vehicles. Turkish pro-government media say that Ankara is going to establish at least 8 garrisons in the area.