In a stunning development, President Donald Trump has refused to release many JFK assassination documents.

What could Trump have possibly meant when he said that releasing all of the secret JFK assassination files — as he is mandated to do by federal law — would cause “irreversible harm to national security” ?!

How could anything from 54 years ago possibly compromise national security now? The usual excuse, “sources and methods,” won’t wash. All sources and methods are utterly different today. Everyone who was an adult then is either dead or way past retirement age. 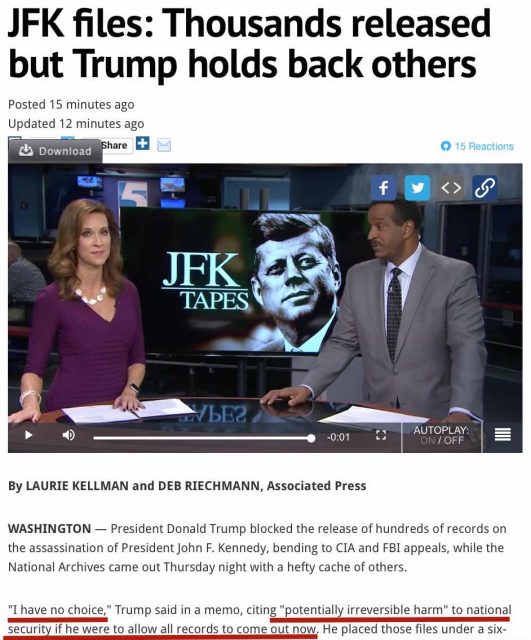 And what did Trump mean when he whimpered “I have no choice.” Isn’t the President supposed to be the Decider? If Trump isn’t making the choice, who is? Is somebody holding a Mannlicher-Carcano, or maybe a more effective firearm, to his head?

Anyone who can put two and two together can see that this whole situation stinks to high heaven. The only way JFK documents could harm national security would be by exposing the fact that JFK was murdered in a coup d’état. This would destroy confidence in our system of government, which would (in the view of the criminal scumbags who run our country) cause “irreversible harm to national security.”

And if Trump “has no choice,” that can mean only one thing: They made him an offer he couldn’t refuse.