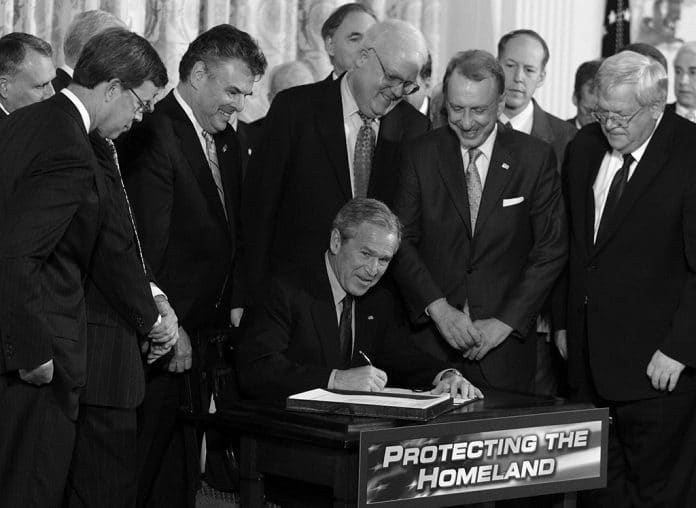 On this 26th day of October in 2001, U.S. President George W. Bush signs the Patriot Act, or as some opponents call “The Un-Patriot Act”, an anti-terrorism law drawn up in response to the attacks on the Pentagon and World Trade Center on September 11, 2001.

The USA PATRIOT Act, as it is officially known, is an acronym for “Uniting and Strengthening America by Providing Appropriate Tools Required to Intercept and Obstruct Terrorism.” Bush hoped the bipartisan legislation would empower law enforcement and intelligence agencies to prevent future terrorist attacks on American soil.

The law was intended, in Bush’s words, to “enhance the penalties that will fall on terrorists or anyone who helps them.” The act increased intelligence agencies’ ability to share information and lifted restrictions on communications surveillance.

While Congress voted in favor of the bill, and some in America felt the bill actually did not go far enough to combat terrorism, the law faced a torrent of criticism. Civil rights activists worried that the Patriot Act would curtail domestic civil liberties and would give the executive branch too much power to investigate Americans under a veil of secrecy—a fear not felt since the protest era of the 1960s and 1970s when the FBI bugged and infiltrated anti-war and civil rights groups.

The Patriot Act has faced ongoing legal challenges by the American Civil Liberties Union, and in recent years, some members of Congress who had originally supported the bill have come to mistrust the Bush administration’s interpretation of the law.

Nevertheless, a Republican-controlled Congress passed and Bush signed a renewal of the controversial Patriot Act in March 2006. Bush exacerbated the controversy over the renewal of the act by issuing a so-called “signing statement”—an executive exemption from enforcing or abiding by certain clauses within the law—immediately afterward.