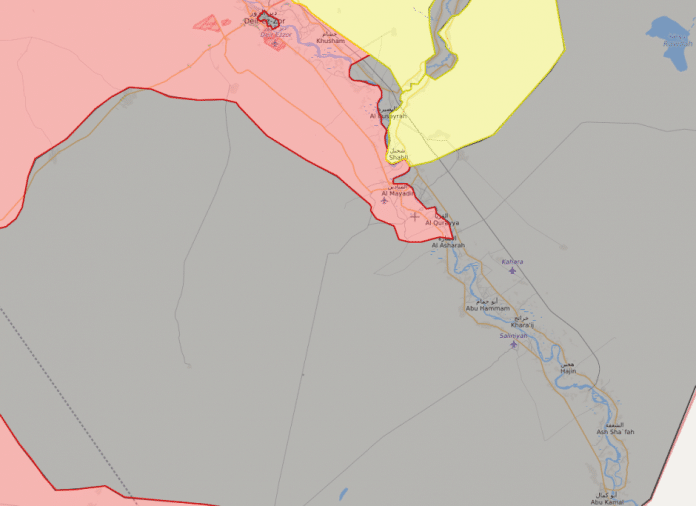 By Sophia Mangal for VT

During all the latest weeks we can observe with anxiety how the developments dashingly have been going on along the Euphrates.
The Syrian Arab Army (SAA) reported on September 15, 2017, on capturing one of the latest ISIS-stronghold in Syria, Al-Mayadin. The area of Al-Amar oil field was designated as a possible next direction of advance then. However, the Islamists damaged river crossing facilities in two points while retreating. This made it difficult to implement the scenario.

With the support of the U.S. Kurdish military wing of the Democratic Union Party (PYD) took advantage of SAA’s confusion and have established control over al-Amar on September 22, 2017, themselves. According to various Syrian media, the U.S. SOF in concert with the Syrian Democratic Forces (SDF) even organized the transferring of ISIS-fighters from Raqqa towards al-Amar to achieve a 100% result.
It seems that the importance of the largest oil and gas field is beyond controversy. For example, the Jihadists were pumping out at least 25 thousand barrels of oil per day. The forthcoming outcome of the war in Syria and the negotiation position of the sides directly depend on the number of oilfields captured by the sides. In this regard, a question arises on possible strategic initiatives of Kurds (the U.S. in fact) and of the Syrian Government in the struggle for oil and gas fields to the East of Euphrates.

To deliberately avoid giving publicity of the U.S. participation in this struggle, most of the top American media stubbornly report that the American leadership has no long-term strategic plan after Raqqa to be liberated from ISIS. However, it seems to be another fake.

Washington officially is going to continue providing full-scale support of Kurds in clearing the territories East of Euphrates from ISIS. Meanwhile, the main task here is not to stabilize the situation in the Deir-Ezzor Governorate as it may be understood from the official statements, but to capture as many oil and gas field as possible.

Talal Sello, an SDF official, confirmed they are proceeding carrying out the advance in Deir-Ezzor under the support of the U.S.-led coalition. Having said so, Sello gave us evasive answers on the real aims pinpointing main of them among which are providing aid to liberated people, civil protection, and reconciliation between Syrian Kurds and Turkey. He didn’t comment on how the Kurdish advance towards Syrian-Iraqi border might intercede conflicting parties.
The former U.S. ambassador to Iraq and Turkey James F. Jeffrey supposes once Raqqa has been liberated, the United States should continue the deployment of the U.S. Special Forces including military training and liaison detachments to support SDF. The option of arming the FSA must stay on the table and the White House should facilitate reconciliation between Turkey and the YPG (and potentially the PKK).

In its turn, Center for Strategic for International Studies went even further, stating that the U.S. authorities should, first, back Kurdish march towards the Euphrates River Valley and second, U.S. forces should partner with local Sunni tribes located in that area.

An interesting opinion of Washington’s plans was unwittingly expressed by Trump’s national security adviser H.R. McMaster. The representative of the president emphasized one of Administration’s chief objectives is to block Iran and Hezbollah from consolidating their gains in the eastern regions of Syria. He declined to comment the way the task to weaken Iranian influence to be implemented.

Naturally, the support of the Kurds by the U.S. could not help but arouse resentment among various regional leaders. Thus, Iranian Foreign Minister Mohammad Javad Zarif said that the United States would provide all possible resistance to Iran and prevent Assad’s troops from regaining control over the Syrian-Iraqi border. Turkish President Erdogan has also repeatedly spoken out against the strengthening of the Kurds.

Confrontation in the East of Euphrates is most likely entering the active phase. The situation will continue to escalate. While the Government of Syria is seeking to recover its land, the U.S. Administration is striving to play a Kurdish card in hopes for medium-to-long-term perspectives on energy policies. The desire to capture Al-Amar only indicates that a major battle in the political arena is yet to come. The energy companies will be playing a far-reaching presence.